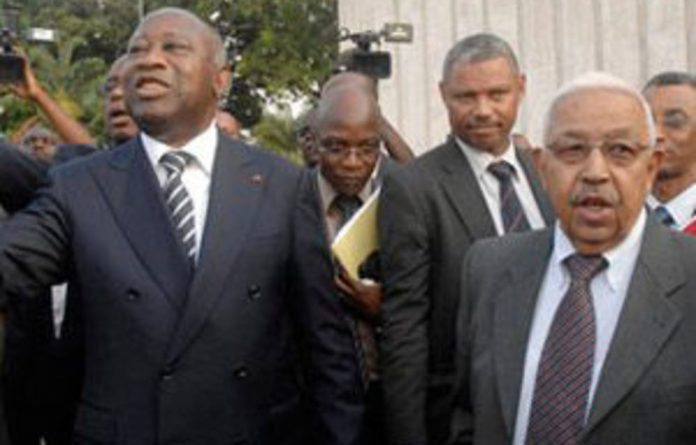 A delegation of three West African presidents who met incumbent Côte d’Ivoire leader Laurent Gbagbo on Tuesday to deliver an ultimatum to step down or face force left saying more meetings were needed.

Gbagbo’s government, meanwhile, remained defiant in the face of international pressure to cede power, saying it would sever ties with any country that recognised envoys named by rival presidential claimant Alassane Ouattara.

“The government would like to make it known that, in the light of such decisions, it reserves the right to apply reciprocity in ending the missions of their ambassadors in Ivory Coast,” the government’s spokesperson said in a statement on national television on Tuesday.

French Foreign Minister Michele Alliot-Marie had said France would accredit a new Ivorian ambassador at the request of the government headed by Ouattara, whom it recognises as the winner of last month’s contested election.

The delegation planned to travel to Nigeria to report back to the bloc’s chairperson, President Goodluck Jonathan.

“The chairman will negotiate a date for our return, but it would be soon,” Cape Verde’s president said.

The foreign minister of Gbagbo’s government, Alcide Djedje, said the next meeting would be “around January 2”.

Gbagbo’s government has signalled he is unlikely to agree to bow to international pressure and cede power to Ouattara, considered by regional and world powers to be the legitimate winner of last month’s presidential election.

The United States and the European Union have imposed a travel ban on Gbagbo and his inner circle, while the World Bank and the regional West African central bank have frozen his finances in an attempt to weaken his grip on power.

Gbagbo’s camp originally said it would welcome the visiting leaders “as brothers and friends, and listen to the message they have to convey”. But shortly before the meeting, his government warned it would not tolerate any meddling in its affairs.

‘No right to intervene’
“Let’s avoid political delinquency. No international institution has the right to intervene by force to impose a president in a sovereign state,” government spokesperson Ahoua Don Melo told the BBC when asked if Gbagbo would leave.

Post-election violence has killed more than 170 people and threatens to tip the country back into civil war.

In a sign of mounting tensions, a crowd attacked a United Nations convoy on Tuesday, wounding one peacekeeper with a machete and setting fire to a vehicle, according to a statement issued by the UN mission in Côte d’Ivoire.

The standoff turned violent this month after Ouattara supporters tried to seize the state broadcaster’s building and clashed with security forces. At least 20 people were killed.

After several days of calm, sporadic gunfire was heard on Tuesday morning in the Abidjan neighbourhood of Abobo, a stronghold of Ouattara supporters. A Reuters witness said police were chasing youths trying to set up barricades with burning tyres. It was not known if there were any casualties.

But the diplomatic efforts to solve the crisis appeared to be calming tensions, for now at least.

A mass rally planned for Wednesday by the powerful pro-Gbagbo “Young Patriot” movement, led by firebrand Charles Ble Goude, who is Gbagbo’s youth minister, was postponed.

The turmoil has pushed cocoa futures to four-month highs amid fears it could eventually disrupt exports. Côte d’Ivoire’s eurobond hit a record low last week on concern that it would not meet an interest payment of nearly $30-million due on December 31.

If it fails to pay on time, creditors will try to start negotiations with it in January, a senior debt negotiator said on Tuesday in an interview with Reuters. – Reuters