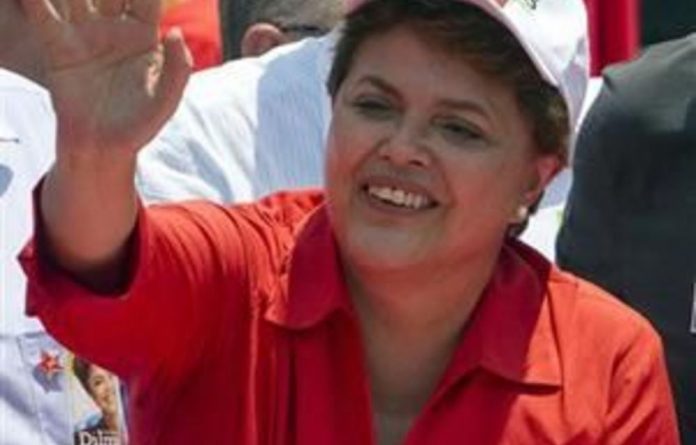 Dilma Rousseff took over as Brazil’s first female president on Saturday with pledges to build on the policies of her hugely popular predecessor Luiz Inácio Lula da Silva.

The 63-year-old divorced grandmother, who was Lula’s former Cabinet chief, assumed the presidency in a carefully staged ceremony under at times rainy skies.

A 1952 Rolls-Royce convertible took her along streets lined with an estimated 70 000 well-wishers.

As the rain lifted, the car’s roof came down and she stood up in the back, dressed in white and waving to people brandishing flags and umbrellas.

She then embraced Lula at the presidential palace, receiving from him the green-and-gold official sash before giving her first speech to the nation.

“I will look after the most vulnerable. I will govern for all Brazilians,” she said in the televised address from the palace’s balcony after the rain stopped.

Lula himself pointedly left her alone in the spotlight, save for a brief heartfelt hug.

Required to step down after serving the maximum two consecutive terms permitted under Brazil’s Constitution, Lula has not said what he plans to do in retirement.

But he commented weeks ago that he was a “natural born politician” who would not rule out maybe trying to return to the presidency after Rousseff’s four-year mandate was over, depending on the performance of the woman he helped get elected.

Afterward, he flew to São Paulo, to see his former vice president, Jose Alencar, in hospital where he was suffering intestinal bleeding from cancer he has long been suffering.

From there, he went to his home in the town of São Bernardo do Campo, where 1 000 residents were waiting to hail the return of their local hero.

In her swearing-in speech before Brazil’s Congress, Rousseff repeatedly paid homage to her mentor, calling him a “great man” and vowing to maintain his legacy, notably in reducing poverty and promoting economic prosperity.

“The most determined struggle will be to eradicate extreme poverty,” she said, declaring: “We can be a more developed and fairer country.”

After the speeches, Rousseff greeted dozens of foreign leaders, most of them presidents from neighbouring South American nations.

United States Secretary of State Hillary Clinton, who once held presidential ambitions herself, was among the dignitaries, speaking with Rousseff just before Venezuela’s anti-US President Hugo Chávez came up to do likewise.

Brazil’s economy grew an enviable 7,6% in 2010, it enjoys recently discovered oil finds that could make it a big-league exporter, it has won a significant role on the world stage, and it is preparing to host the 2014 Soccer World Cup and 2016 Olympics.

Growth is expected to slide to 4,5% in 2011, inflation is well above the government target at an estimated 5,9% and rising, and an aim to cut public debt from 42% to 30% is likely to meet resistence, not least because Brazil desperately needs more and better infrastructure.

Brazil’s currency, the real, has more than doubled in value against the dollar during Lula’s eight years in power, and looks set to rise further, undermining the competitiveness of Brazilian exporters.

Rousseff, a left-wing former guerrilla who was tortured in prison in the 1970s for opposing the then-military government, will also inherit a diplomatic row with Italy.

On his last day in power, Friday, Lula refused to extradite an Italian former militant, Cesare Battisti, convicted of four murders in the 1970s.

A furious Rome had withdrawn its ambassador in protest and warned it would up the pressure to have Battisti handed over.

Rousseff has much to do to fill the big shoes of the previous president, whose shadow will likely fall over most, if not all, of her mandate.

A former trade union leader, Lula deftly employed his negotiating skills in international diplomacy and to stay firmly in charge of the ruling Workers Party.

His genuine man-of-the-people demeanor translated into an 87% popularity rating by the end of his government.

Rousseff, in contrast, has never before held elected office and largely persuaded voters to give her the presidency on the strength of her promises to continue Lula’s policies.

Brazilians were willing to give her the benefit of the doubt.

“My heart is divided. Lula was a statesman, a very charismatic man who represented the working class, and all of us are sad to see him go,” said Maristela Leal, a teacher come to watch the handover ceremony.

“I feel better represented by Lula than by Dilma. But I have a lot of hope for her, and I think it’s important to have a woman as president,” she said. – AFP