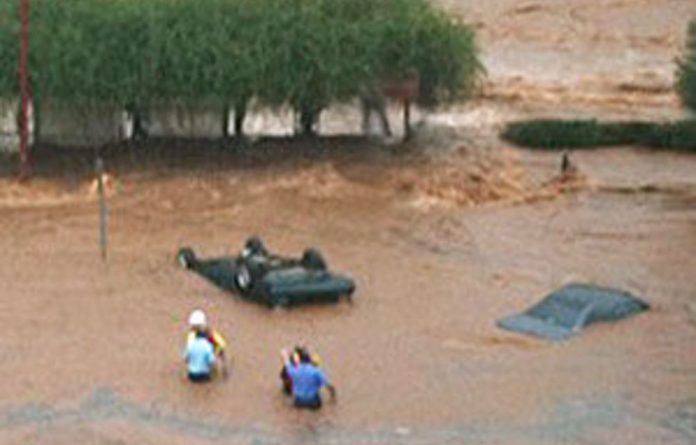 Residents in Australia’s third largest city, Brisbane, sandbagged their homes against rising waters on Monday as torrential rain worsened floods that have paralysed the coal industry in the north-east and now threaten tourism.

Prime Minister Julia Gillard said the cost of the floods would not delay a return to budget surplus in 2012/13, but JP Morgan predicted the disaster would crimp growth this year and could delay another increase in interest rates.

The worst floods in 50 years have at times covered an area the size of France and Germany combined in Queensland state. Six people have been killed while dozens of towns have been isolated or partially submerged. More monsoon rains are expected all week.

“People need to think about how to get out and if you don’t need to travel, stay off the roads,” said Police Chief Superintendent Alistair Dawson, referring to some of the smaller towns near Brisbane, Queensland’s state capital.

Toowoomba, a major rural city west of Brisbane, was hit by a 2m-deep wall of mud-filled floodwater that swept two people to their deaths and left others clinging to the tops of vehicles carried along streets by the torrent, police said.

In Brisbane, a city of two million, people in low-lying areas were given sandbags and warned the worst of the flooding might not occur until Tuesday or Wednesday.

Queensland Tourism said rains and flooding would hurt the industry, but it was too early to quantify the impact.

Australia’s Aus$32-billion tourism sector was already in trouble due to the strength of the local dollar driving off overseas visitors and enticing Australians to go abroad.

The floods have caused an estimated Aus$6-billion in damage and economists say they will cut economic growth in 2011 and heighten inflation as food prices rise and reconstruction begins in the nation’s second largest state.

Queensland’s $20-billion coking coal export industry has been brought to a virtual standstill.

“With more rain falling it could be months before the floodwaters clear and the extent of the damage to essential infrastructure is known,” said JP Morgan chief economist Stephen Walters.

Total damage bill unknown
Gillard announced more aid on Monday, but said the floods would not derail an expected 2012/13 return to a budget surplus, with economic expansion now well into the 20th year and annual growth at 2,7% in December.

“I can’t at this stage tell people what the total cost of recovering from these floods is going to be, because I can’t predict the draw-down on infrastructure money until we see what’s under the floodwaters,” she said.

“Toxic pollution from flooded farms and towns along the Queensland coast will have a disastrous impact on the Great Barrier Reef’s corals and will likely have a significant impact on dugongs, turtles and other marine life,” said World Wildlife Fund spokesperson Nick Heath.

The flood threat was expected to be extended to towns in neighbouring New South Wales state.

A major concern now was the ground, so waterlogged that heavy rains were unable to be absorbed. Full rivers, creeks and man-made watercourses were bursting their banks.

About 116 000 mega litres of water — equivalent to more than 100 000 Olympic swimming pools — were being released daily from one Queensland dam, officials said.

Coal seam gas drilling in the Surat Basin, a major source of gas for an estimated $200-billion in proposed liquefied natural gas projects to be built this decade, has been halted by flooding.

Global miners Anglo American , Rio Tinto , Xstrata and BHP Billiton , have been hit by the floods, and all have made force majeure declarations, which release firms from delivery commitments.

Flooding has begun to recede in the main Bowen Basin coal region, but many mines remain flooded and will take weeks to drain and resume full production. While some rail links between mines and the ports have resumed, others remain under water.

Coal stocks were running low at the key coal port of Dalrymple Bay, but it was receiving enough to keep loading ships, while the port of Gladstone said it could be days to weeks before it starts getting coal supplies back to normal. — Reuters