A country starting from scratch 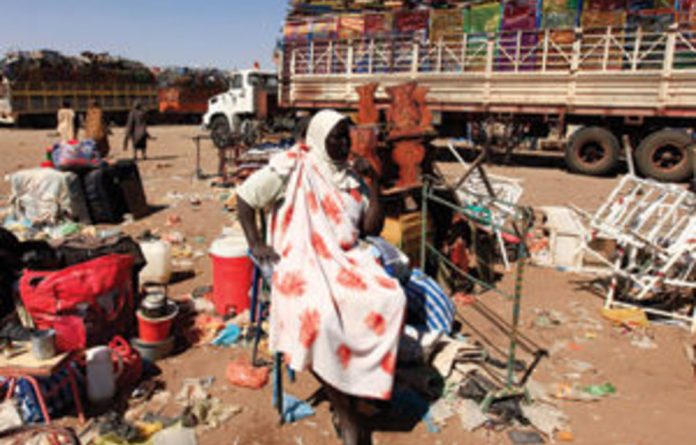 Spread out over four metal-frame beds on a plastic tarpaulin refracting floodlights on to a gravel playing surface, Michael Lual’s family is bedding down for the night.

The only football stadium in the South Sudanese town of Malakal is a new home to about 1 000 South Sudanese who made the journey home for the independence referendum.

“I don’t have a job in the south yet,” said Lual (28), his palms worn and white with chalk from the construction industry in Khartoum, which he left two days ago by bus, “but the government has promised us land.”

He intends to build a house, he says, maybe grow some vegetables, once the government in the capital Juba provides transport and drives him to his home state of Jonglei. “I need that land. If I don’t get it, my situation will not be good.”

Expectations are high in South Sudan. About 120 000 have returned home from the north, according to the United Nations, as 3,8-million southerners vote in a week-long referendum that will split Africa’s biggest country in two. But meeting those expectations in a country half the size of South Africa with just 40km of tarred roads will be a challenge.

There is little state presence outside large towns, such as Malakal and Juba, no hospitals, clinics or police stations. About 80% of the health services are provided by NGOs, but only 30% of residents can access them.

Half those in the public sector did not finish primary school; just 3% are university graduates. There is little industry or agriculture — everything from cement to vegetables must be imported from Uganda and Kenya. The 1983 to 2005 civil war destroyed everything.

Oil, which accounts for 98% of the area’s revenue, cannot fund the public service and army, raising the possibility that the international community’s efforts to build a state from scratch could fail.

Since the 2005 Comprehensive Peace Agreement that ended the war between the Muslim north and mainly Christian south, in which two million people died, the south has received $10-billion in oil revenues.

“If the returnees keep coming at the current rate a huge burden will be placed on the structures of state,” warned Joe Feeney, the head of the UN Development Programme (UNDP) in South Sudan.

If the country was to have the same proportion of doctors for each citizen as Kenya, for example, it would need another 1 300. “Extend this to engineers, nurses, economists and statisticians and easily 10 000 professionals are needed.”

Violence is also a problem. In Jonglei state alone 1 500 people died last year in ethnic clashes over land and cattle, with few consequences for those involved.

A new $3-million prison is being built in the capital, Bor, but another 50 police stations are needed, for which there is no funding.

Ninety percent of police officers cannot read or write, according to one official — but they can all use a Kalashnikov. The UNDP’s budget increased to $150-million this year.

Countries such as the United States and Canada, where many south Sudanese refugees have made their homes, have pumped money into projects in the country.

Australia is paying for midwives from Uganda, while Norway is funding 150 civil servants from around the world to work as UN volunteers in the government, developing everything from revenue-raising systems to road projects.

But, with few jobs and high prices, the unfortunate upshot of having to import everything 14 hours by road from Uganda, the South Sudanese government and the international community have a big job on their hands meeting the high expectations of the South Sudanese, tired of years of neglect by the northern government in Khartoum.

Driving in Nairobi a test of nerves — and patience