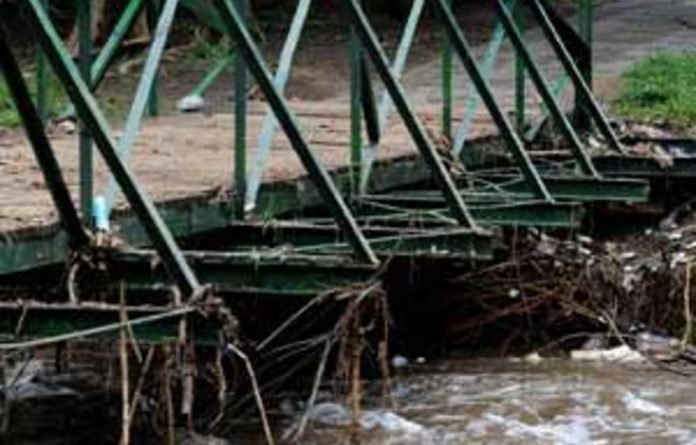 Rainfall is expected for the rest of the week in the northern provinces and central interior of the country, but it is difficult to predict flooding, the South African Weather Service said on Tuesday.

“It was difficult to say whether there would be flooding. We will have to look at it on a day-to-day basis. However, we can’t rule out the possibility of flooding,” he said.

It was difficult to isolate areas that would have heavy rainfall that could cause floods.

Forty-three families had been evacuated from Ivory Park, north of Johannesburg, since Monday as floods swept through the area, emergency services said.

“Emergency services are still at the scene and the operation centre is still operational in Ivory Park,” spokesperson Percy Morokane said.

Monitor ‘hot spots’
“We are dealing with a situation where people are still displaced. Those people will be provided with relief material until they find their feet.”

Emergency calls started coming through after midnight on Monday from the Thembakazi informal settlement. People were evacuated from that settlement, as well as from Rabie Ridge and Ebony Park.

However, after the death of a fireman and four others rescued from floods, water levels at the Hennops River in Centurion had subsided, the Tshwane community safety department said on Tuesday.

“We had a quiet night … The situation is under control but the skies are overcast which could mean more rain,” said spokesperson William Baloyi.

“The bridges over the river are not flooded but people must cross them with precaution.”

On Monday, a 42-year-old fireman Henry Knox and his colleague were in their canoe on a search-and-rescue operation in the Centurion area when they hit a violent rapid. The canoe capsized and Knox drowned.

A man who had been swept away in his car and had managed to clamber onto the roof, told rescuers he saw at least seven people being pushed down the river past him.

“We can’t confirm that these people are missing because no relatives have come forward about it… but the police are continuing their search for possible missing people,” Baloyi said.

He appealed to residents in the area to immediately report any missing people to emergency service personnel.

Too early to tell
On Tuesday AgriSA said it was too early to estimate the amount of damage the floods are causing the agriculture industry.

AgriSA spokesperson Kosie Van Zyl said: “They can speculate, but in my experience in the end the damage is not as bad as predicted.”

He said the only way to make a proper assessment was to go from farm to farm and vineyard to vineyard once the floods had ended.

Apart from the grape vineyards near Upington in the Northern Cape that were still under water, there were likely be no long-term effects on agriculture.

The cooperative governance and traditional affairs department on Monday recommended that 28 municipalities, including Johannesburg and Tshwane, be declared disaster areas. Heavy flooding over the past month has claimed 40 lives countrywide, as a result of flooding, lightning and thunderstorms between mid-December to date.

Information gathered by the National Disaster Management Centre showed that over 6 000 people nationally had been displaced.

Reports received so far from the Northern Cape, North West and KwaZulu-Natal estimated damage to infrastructure at R50-million, R6-million and R300-million respectively.

Reverend Frank Chikane has just completed six years as the chairperson of the Kagiso Trust. He speaks about corruption, his children’s views and how churches can be mobilised
Read more
Friday

In the book, The Indian Africans, academic Kiru Naidoo explores the society of colonial Natal in the late 1800s to early 1900
Read more
Health

Vital information apps and websites are outdated as cases begin to mushroom, especially near the coast, just in time for the December holidays
Read more
Politics

In its latest policy documents, the ANC is self-critical and wants ‘consequence management’, yet it’s letting its members off the hook again
Read more
Opinion