A torrent runs through Upington 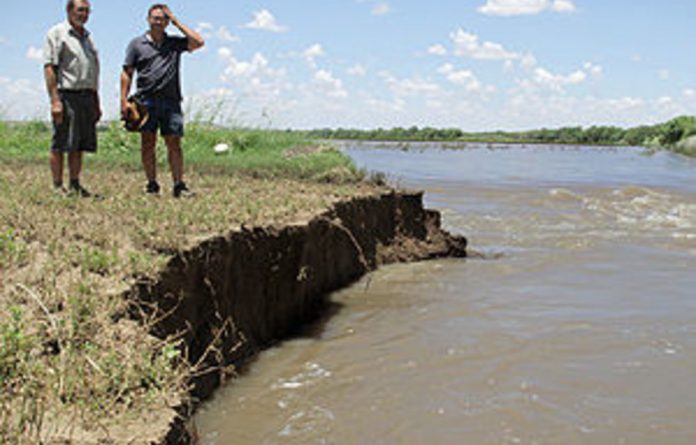 Viewed from an aeroplane window on the descent into Upington, the Orange River appears to twist gently through the arid Northern Cape. But seen at ground level, it roars downstream in a ferocious 7,3-metre-deep torrent at 12km an hour, claiming crops, land and lives.

This is not the first flood 58-year-old “Waltie” van der Walt has experienced on his farm just outside the town, but it is the most devastating. “The most important difference this time is that it came before the harvest. Now we have no cash flow for the coming year,” Van der Walt says quietly as he sips on a cold drink in his kitchen. Outside it is a searing 38°C.

The river broke its banks two weeks ago, engulfing any farmland in its path. That means hundreds of farms in the vicinity have been affected, as they depend on the river for irrigation and the fertile soil surrounding it.

Van der Walt lost 66% of his grape and lucerne crop, costing him about R1,4-million — and this does not take into account damage to his vine trellises.
As in the case of many other farmers along the river, his emergency walls were too weak to withstand the torrent. Made of packed dirt, they had been invisibly weakened by the ­burrows of mice or meerkats.

The vineyards protrude from almost two metres of trapped water, below which Van der Walt’s investment rots slowly. Other parts of the farm are littered with pumpkins washed from a neighbouring property. The packhouse, usually bustling at this time of year, is dark, empty and quiet. Van der Walt can only wait for the water to recede and begin to pump it out, but there is a risk that it will return.

“People don’t understand what this means on ground level,” says his son, 30-year-old Zietsman. “Seasonal staff will no longer be hired on this farm and many others like it. “There’s no income here. How must I keep them busy?” he asks. But permanent workers, he insists, will be protected by their employers.

Vaal River
Paradoxically, the rainy season in the Northern Cape begins only next month. It is the water carried from the Vaal River and released through a chain of dams that has done the damage.

This is clearly baffling to the Van der Walts. “We don’t understand why they let so much out at one time,” Zietsman says. Hofmeyer Joubert, the chairperson of the Agri SA irrigation and water committee in the Northern Cape, agrees. “What we are now trying to do is convince government to keep the dams at 80% capacity all year round. There must be some policy on water release.”

Export grape farmer Peu Bezuidenhout says knowing when to open sluice gates and how much to open them is a finely balanced exercise. “If they open them too early and the rain stops they may end up with too little water in the river and then they’ll be blamed for a drought.”

Linda Page, spokesperson for the department of water affairs and forestry, says that policies on the release of dam water are in place and are specific to each dam.

“Each dam has operating guidelines,” Page says. “There are people stationed at the dams and they follow the guidelines. Farmers have not come to us to tell us how to operate the dams.”

Joubert, who farms grapes and cotton 20km outside Keimoes, describes himself as “one of the lucky ones”, as the damage to his crops “amounts to only R100 000”. Damaged infrastructure could cost him a further R30 000 to R50 000.

“Very few people who farm have money in the bank. All our money is in there,” he says, gesturing towards an expanse of water where two ducks are sailing. His cotton fields lie under this dam, which is 1,5m deep.

Farming community
Joubert says that the recession, followed by the flooding, could have a devastating impact on the farming community in the area. Some grape farmers would have to start afresh and could wait between three and five years to reap any profit. “There aren’t a lot of farmers who are going to last that long,” he says gloomily.

Vuyelwa Qinga Vika, spokesperson for the department of cooperative governance and traditional affairs, says that farmers affected by the flooding are insured.
But crop insurance does not seem wildly popular in Upington. Van der Walt says his land is not low-lying and there hasn’t been a flood in 22 years — and insurance is terribly expensive. Joubert says insurers do not pay out for infrastructure such as vine trellises. “It’s too expensive. It’s not worth it.”
There is little surprise among local farmers about the agriculture department’s refusal to pay compensation for flood damage.

“We don’t like it, but we expected it,” Joubert says, although he argues that the government should help restore shattered infrastructure. Emerging farmers, he says, will suffer most from the disaster.

In Curry’s Camp outside Upington small, often start-up, farmers have been cut off from their fields, which are under water. Hanging bridges which once provided access now float limply atop the raging waters. Only once the river drops to three metres in depth can the fields be reached.

The Blocuso trust was formed 10 years ago when a church offered to sell its land to locals. The trust secured money from government and land was bought for small cultivators.

Dawid du Plessis, a former police officer and a beneficiary of the scheme, is one of 214 people farming in the area. He grows lucerne as a cash crop. It must be harvested every two weeks, but Du Plessis has been unable to cut the crop since the end of last year. He is hoping against hope that when the waters recede some of the crop will have survived.

Concerns
He anticipates that work will be needed on the pathways and the irrigation pumps, which may have been damaged. But money is a concern: “If I don’t have my harvest, I don’t have any funds.”

Du Plessis does not expect the government to provide much help. He must find backing elsewhere, but fears that the banks will turn him away. “The land isn’t worth the money needed to develop it,” Joubert says.

The floods will put a large dent in the finances of the Oranjerivier wine cellar, the largest group of co-operative wine cellars in the southern hemisphere, with six cellars placed along the Orange River to collect grapes from farmers.

Chief production officer Matthee van Schalkwyk says Oranjerivier expected a harvest of up to 150 000 tonnes of grapes this year, “but we aren’t going to get anywhere near that figure now”.

Oranjerivier is also South Africa’s largest supplier of grape concentrate, used in almost all fruit juices, and produces 50-million litres of it a year. This means that grapes may have to be bought in at higher prices.

Van Schalkwyk is worried about local farmers’ future. “Ek sien rooi ligte soos hel,” (I’m seeing red lights like hell), he says. “If they don’t have a product to sell, they won’t make an income.”

He insists that the government must help producers, who will otherwise be forced to abandon their land and stop producing next year. “The cost of production for agricultural farmers is always going up and there’s no sympathy from the government,” he says. Farmers were already in a bind before the floods.

Joubert has been farming near Keimoes for 32 years and this is the fourth flood he has lived through. He knows what is coming next. “We’re still in shock,” he says. “Once the limelight is gone — all the photos and the journalists — we start the work and see the damage and the cost. Then reality begins to set in.”

‘They have taken our beautiful sand from us and left nothing’