Emergence of the new struggle 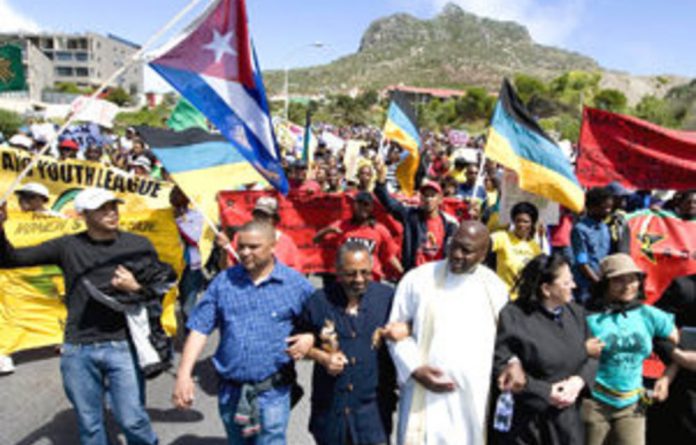 The old joke is that Trotskyites are outnumbered by their opinions.

And at times during the Conference of the Democratic Left, held at Wits from January 20 to 23, one could be forgiven for imagining the lecture theatre as a bare-knuckle boxing arena.

Only there was no blood on the floor ­– just a few bruised egos.

For four days the campus was the stage for a struggle in the past, present and future, as leftists of every stripe tried to answer a call for solidarity. The term “comrades” (pronounced “kom-raids” by the Western Cape contingent) was uttered with an emphasis that tried to wrestle it back from the deadening corridors of power and bring it to life.

The fashion item of choice was the slogan-bearing T-shirt — the more rag-tag, the more convincing, it seemed.

Struggle talk was often accompanied by evocative body language — Kevin Davids of the Hout Bay Civic Association, for example, bounced on the balls of his feet as if about to land a punch as he described the battle over the Hangberg evictions.

Shouts of “Amandla!”, with a blend of conviction and self-consciousness, followed every speech.

Then there was the poetry — passionate and romantic — performed on the first day by Mphutlane wa Bofelo, Myesha Jenkins and Alan Horwitz.

Vision of hope
Things kicked off in earnest on Thursday afternoon with Vishwas Satgar’s keynote address, “Reclaiming a Vision of Hope and a Life of Dignity: Neoliberal South Africa and the Narrowing of Democratic Space”.

Satgar, a former South African Communist Party office-bearer in Gauteng, spoke of Afro-neoliberalism, a sinister tendency “that speaks our language”. He also analysed what he termed South Africa’s “leap into dystopia”.

“Post-apartheid neoliberal South Africa is in a conjunctural crisis in which a capitalist pattern of development is not able to meet the needs of the people and the ecological web of life,” he said. “It is a South Africa that is not viable.”

Speaking of a “civilisational crisis that could lead to the demise of all human life”, Satgar placed the concept of ecosocialism on the agenda.

It would be discussed during most of the conference, with the recurrent question being how it would enhance socialist practice.

But Satgar’s polysyllabic rhetoric seemed to fall on stony ground — feedback from delegates included the view that “the failure of the left was relating to the people”.

Hitting home
The reactions seemed emblematic of the conference as a whole — a gulf opened up between the lay people and the learned. Some clearly had to shed the belief that political jargon was accessible to all.

It was a point that hit home only at the tail end of the conference when an elderly group from the Soweto Concerned Residents entered the conference hall and needed a translator. There was a broad perception that the conference was the brainchild of “ivory tower intellectuals” who had no history as grassroots organisers.

Satgar denied this, insisting that “many of us [conveners] are tried and tested activists, so that criticism for me doesn’t hold water. “We approached this conference with an openness.

Our starting point was that the left has endured a strategic defeat. We moved from apartheid to a neoliberal order. We have experienced severe attacks — either as working-class organisations or people’s movements — and there is a great deal of weakness in terms of capacity for protagonist action from below.

“But we figured that more of the left is better than less. Maybe we will realise that we’re in trouble and find the necessity of unity in this context.”
Satgar complained that this open approach led to “all sorts of forces climbing in” — and at times one had the sense that there were people who had no business there except to discredit the process, labelling it a ploy to sell out the working class to capitalist forces.

Lumbering on
The conference lumbered on. Over the succeeding days, delegates split into commissions before reconvening again in plenary sessions. The programme gave way to extended feedback sessions and heated discussions, which sometimes degenerated into a volatile, erudite madness.

With such a wide ideological spectrum represented, some of the resolutions should be regarded as a cause for optimism in the year ahead, which was characterised as one of solidarity in action. Launching a new umbrella body called the Democratic Left Front, the declaration adopted ominously predicted the changing tide.

“With a great sense of urgency we have come together as the democratic left and are uniting our separate and often fragmented efforts to build solidarity, restore confidence and hope among our masses of this country,” it read.

“The building of working class and popular power lies at the heart of our initiative. We come together convinced that a re-awaking of struggle is at hand. The so-called service-delivery protests and the recent public-sector strike are just the first signs of what is to come.”

As the dust settled and a new Democratic Left Front emerged, the solemn pledge was to avoid repeating past mistakes. “The UDF [United Democratic Front] was primarily driven by people who eventually identified with the alliance and collapsed the organisation into branches of the ANC,” said former Robben Island inmate Marcus Solomon.

“This is not a party but a structure that we can all become affiliated to. We will test it in practice.” Bold words — can a movement addicted to long-winded theorising translate it into action?

Current voices of protest
One of the problems Imraan Valodia faced when he co-wrote Voices of Protest: Social Movements in Post-Apartheid South Africa in 2006 lay in defining what a social movement is and deciding which to include.

Social movements can be distinguished from NGOs and other civil-society organisations which also tackle social issues with a “high degree of public participation”, he says.

The following are some important social movements that have emerged in South Africa in the past few years:

AbaHlali baseMjondolo
Established: 2005 in Durban; 2008 in Cape Town.
Based: KwaZulu-Natal and Western Cape.
Membership: 3 500+.
Campaigns: Formal housing for urban shack dwellers.
Methods: Pamphleteering, community mobilisation, marches, litigation.
Defining moment: Won an October 2009 Constitutional Court judgment against a law that proposed mass evictions from informal settlements in KwaZulu-Natal. A month earlier Abahlali activists in Kennedy Road, Durban, were attacked and their homes destroyed by a mob it accused of having links with the ANC.

Public Participation in Education Network
Established: 2008.
Based: Has a presence in the Western Cape, Eastern Cape, Gauteng and Limpopo.
Membership: Between 800 and 1 000.
Campaigns: Quality public education for all.
Methods: Community-based reading clubs, teacher support, adult education, libraries and school-feeding schemes.
Defining moment: On June 16 2008 the Education Rights Project and social movements retraced the steps of the 1976 Soweto Uprising, an act of social mobilisation that led to the creation of this movement.