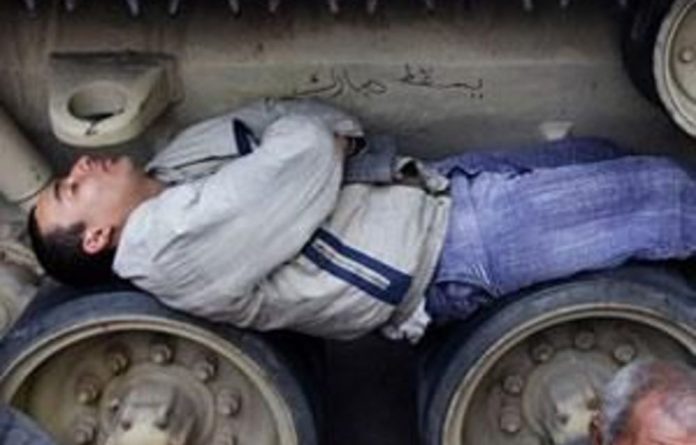 Under pressure from mass protests, Mubarak has pledged to step down after September polls but many demonstrators want his immediate departure and US news reports have suggested Washington was also pressuring him to quit now.

However, Clinton, speaking to reporters on Sunday on the way back from international talks on Egypt in Germany, stressed that Mubarak’s fate was not up to the United States.

“That has to be up to the Egyptian people,” the chief US diplomat said when asked if reality dictated Mubarak play some role in the political transition toward free and fair elections in Egypt.

“As I understand the Constitution, if the president were to resign, he would be succeeded by the speaker of the house, and presidential elections would have to be held in 60 days,” she said.

‘Grappling with reality’
“Now the Egyptians are going to have to grapple with the reality of what they must do,” she said.

Clinton said, for example, that she had heard a leader from the opposition Muslim Brotherhood as well as leading dissident Mohamed ElBaradei say “it’s going to take time” to organise elections.

“That’s not us saying it. It’s them saying it,” she said.

President Barack Obama, meanwhile, also emphasised Egypt’s political transition when pressed in an interview on Sunday on Fox television whether Mubarak was going to quit now.

“Only he knows what he’s going to do. Here’s what we know, is that Egypt is not going to go back to what it was,” Obama said.

“He’s not running for re-election. His term is up this year,” he added.

Clinton said retired diplomat Frank Wisner, whom Obama sent to Mubarak with a message last week, did “not speak for the administration” when he said the Egyptian leader should stay in office during the transition.

She, like other members of the administration, have distanced themselves from Wisner’s remarks but have not actually said he was wrong.

“It’s his opportunity to write his own legacy. He has given 60 years of his life to the service of his country, this is an ideal moment for him to show the way forward,” Wisner said.

Former US vice-president Dick Cheney also praised Mubarak as a “good friend” to United States, pointing out that Americans needed to “remember that”.

Clinton declined to comment on talks that Omar Suleiman, Mubarak’s first vice-president in three decades of rule, held on Sunday with the Muslim Brotherhood.

She said it was up to Egyptians to decide whether the brotherhood’s participation in the transition gave the process credibility.

“There are organisations and individuals whose participation will give credibility in the eyes of some Egyptians and concerns in the eyes of other Egyptians,” said Clinton.

Clinton also said Egyptians will have to clear a number of hurdles in order to stage elections in September.

For example, they would have to determine how to “amend the Constitution to bring it more in line with the kind of democracy and political system” they seek, and set a deadline for reaching such a goal.

They would have to establish an electoral system that includes voter registration rolls.

She said the United States, European and other countries were ready to offer the expertise to help prepare for the elections.

“We’re going to try to work with a lot of like-minded countries around the world to offer whatever assistance we can,” she said. “We have experts in holding credible elections, we have experts in writing constitutions.”

“This is important, to look over the horizon. You don’t want to get to September, have a failed election, and then people feel … what was the point of it.”

Asked if seven months were enough time, she replied: “It’s up to them. But I think, with a concerted effort, with the kind of timelines and concrete steps I’m calling for, it could be done.” – AFP