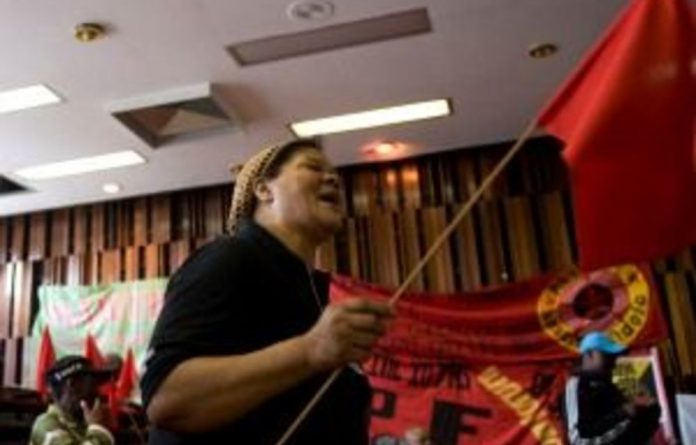 The contemporary world order is in transition. The ideological sway of neoliberalism is receding, but has not disappeared. The underlying structural changes of a world remade in the image of finance capital are still wreaking havoc with markets and economies rocked by instability.

Tied to this is the sinking ship of United States hegemony and the rise of countries of the global South, such as China, which are merely offering more globalisation but without hegemonic leadership or a progressive vision for world order.

We are living through a period of intense global economic rivalry, premised on high unemployment, inequality, hunger and ecological destruction. All this is going to be with us for a long time, with catastrophic consequences, unless a serious political realignment starts to happen in national political spaces — a realignment towards genuine democratic, people-centred and ecological alternatives. In Latin America and now in parts of the Arab world such change has begun.

In this context South Africa’s national liberation left can only offer us “social democracy”, “nationalist state-led development” or “Stalinist central planning”. Any reading of the ANC’s “Polokwane canon” reveals the jaded nature of this 20th century political imagination. Still more telling is the absence of the underlying conditions that make for the realisation of such national liberation alternatives.

First, the globalisation of trade, production and finance provide capital with disproportionate power over the state. Capital’s footloose mobility makes it very difficult to develop a national capitalist class to lead development, but this is the heart of BEE.

Second, the “encadrement” of the bureaucracy has produced a weak state incapable of developing strategic capacities and ensuring effective service delivery.

Third, the narrowing of democracy to weak representative democracy has engendered a political elite obsessed with self-enrichment and impervious to the voices of ordinary citizens. The “red populism” of the national liberation left has merely brought South Africa to a place of great uncertainty — actually to a scary impasse. It reflects the crisis of a degenerate 20th-century left, as in other parts of the world.

‘Useful work’
The emergence of the democratic left on the South African political scene at a recent national conference is far from trying to present a full-blown alternative to the dead end of neoliberalism or national liberation. Hence it is also not about narrow electoral politics. Instead, and even more than political form, we are a process of self-conscious political creation.

One conference is merely a milestone in a long journey that has to do with trying to reimagine a left politics through ethical practice. Our ethical compass is about living and inventing democracy inside this process (definitely through heated debates, differences and new ways of thinking about consensus), plurality as strength, collective intellectual practice, self-education and building transformative power through struggles.

This is a process without preconceived outcomes and thus is unique in South Africa. Such a process means abandoning the illusions of a vanguardist left committed to a violent overthrow of capitalism or a reformist left seeking to make capitalism more humane.

More importantly, we are about strengthening and advancing grassroots struggles through opposition but, at the same time, advancing transformative alternatives from below.
This is illustrated by the ideas, proposals and campaigns that were adopted as part of our common platform of action dealing with ecological resources, unemployment, food sovereignty, education and public services.

On confronting unemployment, three new ideas stand out on our platform: A million climate jobs, the solidarity-economy alternative and a grassroots employment commission.

Our approach to the ecological restructuring of the South African economy has led us to the conclusion that a renewable energy-driven economy will decentralise work opportunities and foster “useful work” rather than old industrial employment.

A renewable energy development path holds out the potential to rethink the “jobs and work paradigm”, the concept of growth and how wealth is allocated in our society through ­public finances.

Attempt to challenge the elite control
The solidarity-economy alternative is a counter to the BEE-driven approach to cooperative development and social enterprises, which is riddled with corruption and state control. Through the solidarity-economy movement, we believe, worker ownership, values-based practices and both direct participatory and associational democracy can be strengthened as part of building alternative workplaces, local food economies and ensuring popular control over finance.

Finally, through our envisaged grassroots employment commission we will be developing other transformative proposals to do with “work”. Such a commission will give voice to solutions from the unemployed themselves, experts (local and international) and movements.

This is our attempt to challenge the elite control and construction of policy discourses through the National Economic Development and Labour Council (Nedlac) and the state.

In February we will host India’s leading economist on the employment guarantee scheme as part of a speaking tour and our attempt to create from below an alternative public sphere for transformative alternatives will be deliberated.

Mazibuko Jara
South Africa is ours. The world too. Young people act & claim your future now. Women. Lesbians. All of us. Democracy from below. Creatively with fun. Our time! Mazibuko Jara has over 684 followers on Twitter.
Facebook
Twitter
WhatsApp
Linkedin