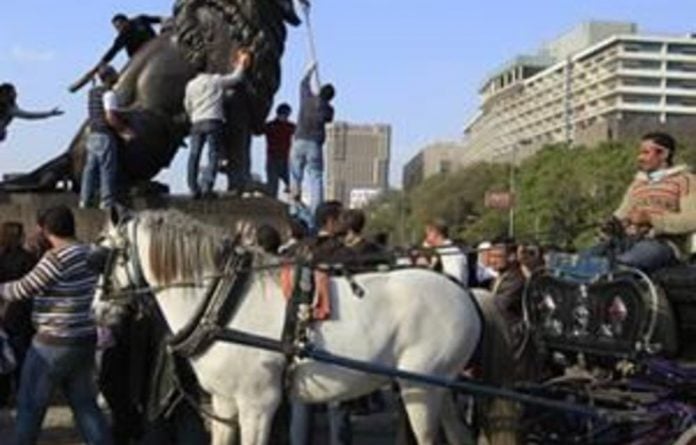 Egypt’s new military rulers told the nation on Saturday they were committed to civilian rule and democracy after Hosni Mubarak’s overthrow and said they would respect all treaties, a move to reassure Israel and Washington.

Pro-democracy activists in Cairo’s Tahrir (Liberation) Square, the epicentre of an earthquake of popular protest that unseated Mubarak, have vowed to stay there until the Higher Military Council accepts their agenda for democratic reform.

Throughout the Middle East, autocratic rulers were calculating their chances of survival after Mubarak was forced from power in a dramatic 18-day uprising that changed the course of Egypt’s history, unsettling the United States and its allies.

“The Arab Republic of Egypt is committed to all regional and international obligations and treaties,” a senior army officer said in a statement on state television, outlining the armed forces’ broad strategies at home and abroad.

The message was clearly designed to try and soothe concerns in Israel which has a 1979 peace treaty with Egypt, the first Arab nation to make peace with the Jewish state. Israeli Finance Minister Yuval Steinitz welcomed the statement.

In another move to restore order, the army said it would “guarantee the peaceful transition of power in the framework of a free, democratic system which allows an elected, civilian power to govern the country to build a democratic, free state”.

Commenting after the army statement, Egypt’s Islamist Muslim Brotherhood, viewed with suspicion by the United States, said that it was not seeking power and praised the efforts of the new army rulers to transfer power to civilians.

Crowds celebrated in Tahrir Square while protest organisers urged the army to meet demands including the dissolution of Parliament and the lifting of a 30-year-old state of emergency used by Mubarak to crush opposition and dissent.

Appetite for transition
“The army is with us but it must realise our demands. Half-revolutions kill nations,” pharmacist Ghada Elmasalmy (43) told Reuters.

It remains to be seen what appetite the military has for a quick transition to genuine parliamentary democracy. The military council gave few details of a “transitional phase” and gave no timetable for presidential or parliamentary elections.

In Sanaa, a demonstration by about 2 000 people inspired by the Egyptian revolt broke up after clashes with pro-government demonstrators armed with knives and batons. In Algiers thousands of police stopped government opponents from staging a march. Mubarak (82) was believed to be at his residence in the Red Sea resort of Sharm el-Sheikh, his future unclear.

Al Arabiya has said the army will soon dismiss the Cabinet and suspend Parliament. The head of the Constitutional Court would join the leadership with the military council, which was given the job of running the country of 80-million people.

The best deterrent to any military attempt to stay in control could be the street power and energy of protesters who swept out Mubarak because he governed without their consent.

One priority was restoring law and order before the working week starts on Sunday. Tanks and soldiers have guarded key buildings and intersections since the disgraced police force largely melted away after failing to crush protesters.

Cairo residents photographed each other holding flowers with smiling soldiers on the first day of the post-Mubarak era.

A carnival air lingered in the capital’s Tahrir Square, where the army dismantled checkpoints and some makeshift barricades were removed. Volunteers proudly swept the square.

“This is the start of the revolution, it’s not over yet, but I have to go back to work,” said Mohammed Saeed (30) packing away his tent.

Mohammed Farrag (31) who was also departing, said he believed stability was returning. “But we will not give up on Egypt as a civilian state, not a military state,” he said.

Many wanted to see the immediate end to emergency laws.

“People’s Communique Number One”, issued by protest organisers, demanded the dissolution of the cabinet Mubarak named on January 29 and of the Parliament elected in a rigged vote late last year.

Some organisers were forming a Council of Trustees to defend the revolution and negotiate with the military council. “The council will have authority to call for protests or call them off depending on how the situation develops,” one said.

The Council of Trustees plans to call for a mass turnout next Friday to celebrate the success of the revolution.

The reformists want a transitional five-member presidential council made up of four civilians and one military officer.

The communique called for the formation of a transitional government to prepare for an election to take place within nine months, and of a body to draft a new democratic constitution.

Egypt’s opposition had been throttled by emergency rule imposed after Mubarak succeeded Anwar Sadat, shot dead by an Islamist army officer in 1981, and there has been no obvious Nelson Mandela or Lech Walesa to spearhead Egypt’s revolution.

Opposition weakened
Egypt’s registered opposition parties have been weakened, fractured or compromised under Mubarak. Protest groups that have sprung up in recent years have proved far more nimble, effective and adept at using social media as Mubarak’s grip weakened.

One possible leader is Amr Moussa, a former foreign minister who has said he will resign from his post as Arab League chief. Other potential contenders are retired diplomat Mohamed ElBaradei and scientist Ahmed Zewail, both Nobel Prize winners.

The best-organised group is the Muslim Brotherhood, but its true level of support, and internal cohesion, is not known.

“We support and value the sound direction that the Higher Military Council is taking on the way to transfer power peacefully to create a civilian government,” said the Brotherhood, saying it would not seek power.

It was unclear if any of the little-known youth leaders behind the well-organised revolt wanted to hold office.

Mubarak’s political end was swift, taking place less than a day after he stunned protesters by insisting he would not step down despite widespread expectations that he was about to do so.

In the United States, President Barack Obama said “nothing less than genuine democracy” would satisfy Egyptians. “This is not the end of Egypt’s transition. It’s a beginning. I’m sure there will be difficult days ahead,” he said.

Washington has pursued a sometimes shifting line since the anti-Mubarak protests began on January 25, wary of losing a bulwark against militant Islam but keen to back political freedom.

Saudi Arabia, which had supported Mubarak throughout, said on Saturday it welcomed the peaceful transition of power.