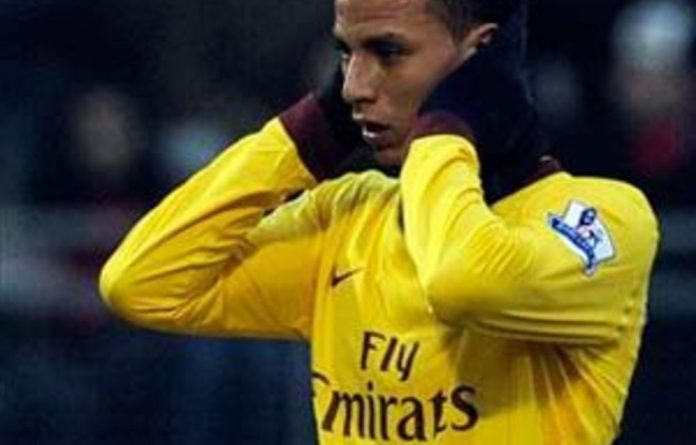 After beating Barcelona in midweek Arsenal was brought down to earth by third-tier London rival Leyton Orient, which held the Premier League club to a 1-1 draw in the Football Association (FA) Cup fifth round on Sunday.

“We were the underdog but we got a draw and we’re looking forward to the replay now,” Tehoue said. “We had to keep believing. We were prepared to fight to get through.”

The Gunners, who made 10 changes from the side which beat Barcelona 2-1 in the Champions League on Wednesday, now have to fit another fixture in their already congested program as they chase four titles.

Manchester City secured a more comfortable victory over another League One side on Sunday, with Patrick Vieira’s heading in two goals in a 5-0 rout of Notts County in a delayed fourth-round replay.

Arsenal looked to be on course for a last-eight meeting with Manchester United when Rosicky scored his first goal since January 2010.

Denied a second goal
The Czech Republic midfielder glanced in a header in the 53rd minute after meeting Nicklas Bendtner’s cutback, but Arsenal lacked cutting edge up front at Brisbane Road in east London.

Rosicky was denied a second goal by Jamie Jones in the 68th, with the goalkeeper making a reaction save at the near post and then blocking the rebound. Andrey Arshavin was also denied by the post.

The arrival, though, of French forward Tehoue had injected some pace into the Orient attack and the home side’s perseverance eventually paid off.

“We have played the game with the right attitude and could not fault our fighting spirit, but you also have to give credit to Leyton Orient because they never gave up and fought very hard,” Arsenal manager Wenger said. “The most negative side of our result today is one more fixture and in fairness that is not what we needed.”

At Eastlands, Man City had to rely on free signing Vieira after the £50-million striking combination of Mario Balotelli and Dzeko struggled to trouble Notts County.

After weathering early pressure from County, Vieira headed in from David Silva’s corner with the help of Krystian Pearce’s deflection in the 37th minute.

The 34-year-old Vieira made a cleaner connection when he nodded in Alexandr Kolarov’s corner in the 58th.

“We know how to win but we saw how difficult it will be to go all the way,” Vieira said. “We need to believe in ourselves and work as hard as we did today.”

Empty net
City had to wait until the last six minutes to finish off the League One side, with goals from Carlos Tevez, Edin Dzeko and Micah Richards.

Tevez latched onto Dzeko’s throughball and outsprinted the defense to round Stuart Nelson and roll the ball into an empty net in the 84th.

Tevez turned provider for Dzeko in the 89th, crossing for the Bosnia forward to head in from close range.

Richards hooked in City’s fifth in stoppage time after County failed to clear a corner.

The quarterfinal draw was also made Sunday and if Man City can overcome Aston Villa on March 2, Roberto Mancini’s side will play either Everton or Reading in the last eight later in the month. Stoke will host West Ham or Burnley, who meet on Monday.

Bolton will travel to Birmingham on the weekend of March 12 and 13 after Ivan Klasnic scored his second FA Cup goal in four days.

The Croatia striker, who scored the winner in Wednesday’s fourth-round replay against Wigan, volleyed home in the 19th against Fulham.

In Sunday’s only Premier League match, West Bromwich Albion salvaged a 1-1 draw against bottom-place Wolverhampton Wanderers to move a point clear of the relegation zone.

Carlos Vela scored his first West Brom goal since joining on loan from Arsenal last month in the 90th, netting the rebound after James Morrison’s shot was spilled by Wayne Hennessey.

The Mexico striker canceled out a first goal for Wolves from Jamie O’Hara, who is on loan from Arsenal’s north London rival Tottenham. The midfielder curled a 20-metre shot past Boaz Myhill in the 39th.

While Wolves remain bottom of the Premier League, West Brom are a point and a place clear of the drop zone after Roy Hodgson’s first game in charge. — Sapa-AP