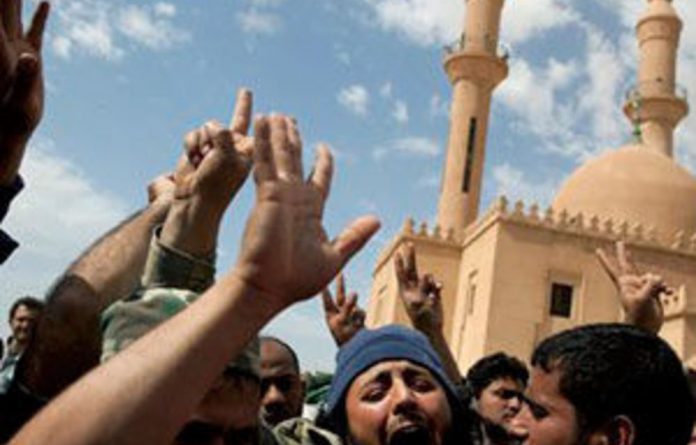 Muammar Gaddafi struck at rebel control of a key Libyan coastal road for a second day on Thursday but received a warning he would be held to account at The Hague for suspected crimes by his security forces.

Arab states weighed a plan to end the turmoil in the world’s 12th largest oil exporting nation, but a leader of the uprising against Gaddafi’s 41-year-old rule said he would reject any proposal for talks with Gaddafi to end the conflict.

In Paris, French Foreign Minister Alain Juppe said France and Britain would support the idea of setting up a no-fly zone over Libya if Gaddafi’s forces continued to attack civilians.

The uprising, the bloodiest yet against long-serving rulers in the Middle East and North Africa, has torn through the Opec-member country and knocked out nearly 50% of its 1,6-million barrels per day output, the bedrock of Libya’s economy.

In Libya’s east, the site of a struggle for control of a strategically vital Mediterranean coastal road and oil industry facilities, witnesses said a warplane for a second day bombed the oil terminal town Brega, 800km east of Tripoli.

But on the ground, events appeared to turn against Gaddafi, as rebels spearheading the unprecedented popular revolt pushed their frontline against government loyalists west of Brega, where they had repulsed an attack a day earlier.

The opposition fighters said troops loyal to Gaddafi had been driven back to Ras Lanuf, home to another major oil terminal and 600km east of Tripoli.

They also said they had captured a group of mercenaries.

In an angry scene at al-Uqayla, east of Ras Lanuf, a rebel shouted inches from the face of a captured young African and alleged mercenary: “You were carrying guns, yes or no? You were with Gaddafi’s brigades yes or no?”

The silent youth was shoved on to his knees into the dirt. A man held a pistol close to the boy’s face before a reporter protested and told the man that the rebels were not judges.

In The Hague, International Criminal Court prosecutor Luis Moreno-Ocampo said Gaddafi and members of his inner circle, including some of his sons, could be investigated for alleged crimes committed since the uprising broke out in mid-February.

“We have identified some individuals in the de facto or former authority who have authority over the security forces who allegedly committed the crimes,” Moreno-Ocampo said.

“They are Muammar Gaddafi, his inner circle including some of his sons, who had this de facto authority. There are also some people with formal authority who should pay attention to crimes committed by their people.”

Libyan government spokesperson Musa Ibrahim told BBC Radio the news from The Hague was “close to a joke”.

“No fact-finding mission has been sent to Libya. No diplomats, no ministers, no NGOs or organisations of any type were sent to Libya to check the facts … No one can be sent to prison based on media reports,” he said.

The rebels, armed with rocket launchers, anti-aircraft guns and tanks, called on Wednesday for UN-backed air strikes on Foreign mercenaries it said were fighting for Gaddafi.

“Bring Bush! Make a no-fly zone, bomb the planes,” shouted soldier-turned-rebel Nasr Ali, referring to a no-fly zone imposed on Iraq in 1991 by then US president George Bush.

Italy said it was preparing for a potential mass exodus of migrants escaping turmoil in North Africa after a rise in flows of illegal immigrants from Tunisia, the initial destination for tens of thousands who have fled violence in Libya.

Save The Children and Médecins Sans Frontières said they were struggling to get medicines and care to Libya’s needy, with gunmen blocking roads and civilians too scared to seek help.

As the struggle on the ground intensified, Arab League secretary general Amr Moussa said a peace plan for Libya from Venezuela’s President Hugo Chávez was under consideration.

“We have been informed of President Chávez’s plan but it is still under consideration,” Moussa told Reuters on Thursday. “We consulted several leaders yesterday,” he said.

Moussa said he had not agreed to the plan and did not know whether Gaddafi had accepted it.

Chavez’s plan would involve a commission from Latin America, Europe and the Middle East trying to reach a negotiated outcome between the Libyan leader and rebel forces.

Information Minister Andres Izarra told Reuters that Venezuela was carrying out an intense agenda of contacts to crystalise the proposal, adding: “Those contacts continue today … Venezuela’s commitment is to peace.”

At a meeting with adoring loyalists in Tripoli on Wednesday, Gaddafi slammed “armed gangsters” he said were behind the unrest as part of a plot to colonise Libya and grab its oil, and said if foreigners intervened “another Vietnam will begin”.

The Libyan government has tried to persuade people in Tripoli that life continues as normal, but the crisis was affecting everyday life. There were queues outside banks and residents said food prices had gone up, while the street value of the Libyan dinar had fallen dramatically against the dollar.

A fish market near Tripoli’s Green Square was mostly empty. “The situation is affecting us,” said Ismail, a fisherman. “All the Egyptian workers who run the boats have left.”

‘Got to Tripoli’
In the opposition stronghold of Benghazi, men of all ages gathered next to the courthouse engaged in fierce debates, enjoying their new-found freedom of speech.

“We must go to Tripoli and get rid of Gaddafi,” shouted one, to murmurs of approval from those around him.

“But we have only our shirts to protect us from the cannon,” said Ahmed el Sherif (60) standing on the edge of the group.

The upheaval is causing a humanitarian crisis, especially on the Tunisian border where tens of thousands of foreign workers have fled to safety. But an organised international airlift started to relieve the high pressure human flood from Libya as word spread to refugees that planes were taking them home.

After three days of chaos and a moment of panic when troops fired into the air to control crowds, a sense of order and calm was established at the Ras Jdir border crossing.

On the border, visiting European Union humanitarian crisis chief Kristalina Georgieva became the most senior international official to come to the crisis zone.

“The European Union is doing everything we can to pressure Gaddafi to let people go and to stop torturing his people,” said Georgieva, the bloc’s Commissioner for International Cooperation, Humanitarian Aid and Crisis Response. – Reuters