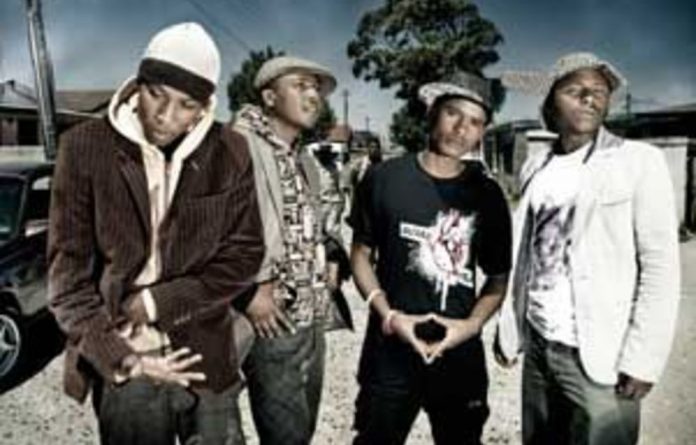 With the first song she recorded, Nthabi Mofokeng — Miss Nthabi — got lucky.

Most artists’ early efforts are confined to sketchy demo CDs or buried on long-forgotten hard drives. Not Miss Nthabi. The South African MC stepped into the studio for the first time in 2005 when producer Helio invited her to the cottage at the back of his Johannesburg home. The cottage contains a full studio set-up. She’d never written a full song before, but Miss Nthabi decided to give it a go.

That song, Reality Check, was an eerie, focused piece of music that showcased her nascent rhyming skills. She wasn’t too surprised when it showed up on a local hip-hop compilation, but she was completely blown away when it started getting radio airplay soon after release.

‘The first time I heard my song on the radio, I was like: ‘Oh my gosh, I can actually do this! I need to start taking this seriously. I actually have something to offer,’” she says. She quickly followed it up: her debut EP, From the Streets to the Lab, was a free download clocking more than 25?000 clicks in 2006 and her studio album, Welcome to Me, released last year, won positive reviews for its soulful lyrics and production. But that first radio play was what made Miss Nthabi decide that whatever South Africa’s hip-hop scene was going to be, she wanted to be a part of it.

Difficult situation
Hip-hop in South Africa faces the same problems all music faces — how do you reach as wide an audience as possible? But it has additional posers unique to this country — can you rap in any of South Africa’s 11 languages and still be relevant to all your listeners? And how much can you rely on American hip-hop before losing your own identity? But this is a genre bursting with talent and South African rap artists are finding ways around the difficulties their situation throws at them.

Simone Harris understands this. She’s the editor of Hype, the country’s biggest hip-hop magazine. In six years at the magazine Harris has seen the genre get bigger and bigger, not least by seizing commercial opportunities.

‘The biggest change [in] how guys have hustled is in terms of people they’ve been networking with,” she says. ‘They’re a bit more unconventional now. Guys are doing things with corporate entities that we never thought possible. For example, [food company] Willards is pumping so much into it at the moment. And instead of being nervous and sceptical, rappers are capitalising on it. I never really saw that happening before.”

Corporate interest helped South African hip-hop beat one of its biggest problems. Globally, few genres have taken to the internet like hip-hop and it’s now a vital tool for any artist. But in South Africa? Not a chance. Of the country’s 49-million people, only around six million have access to the web. And in the predominantly black townships, which represent hip-hop’s core market, internet access is almost unheard of. When it comes to publicising and distributing music, there’s rarely a workable online option.

Youth market
So, what’s filled the gap? Cellphones. Unlike internet use, 41% of adults use a cellphone regularly. And with hip-hop, telecom companies have joined the fray. MTN, one of the biggest service providers, sponsors the annual Hype awards.

‘Because hip-hop is a youth market and cellphone networks know that’s their target audience they’re beginning to speak to those audiences,” Harris says. ‘You look at MTN — they have a platform for music downloads and throughout Africa we’ve seen that emergence. Vodacom is using hip-hop in their advertising campaigns. It’s going to become even stronger. Everyone accesses music through their phones.”

However, the corporations are mainly based in Johannesburg and acts from that city have been the main beneficiaries of the influx of money.

Spaza rap crew
Elsewhere, things are a little different. Just ask Pioneer Unit. The Cape Town-based company (run by an Englishman, Damian Stephens, who works as a producer under the name DPlanet) has risen to become one of the country’s premier independent labels, with a reputation for pushing acts that rap in languages other than English.

El Nino (Elethu Mpengesi) is a member of the four-man group Driemanskap, who recently released their album Igqabhukil’ Inyongo on the label. They come from Cape Town’s Gugulethu township and are almost obsessively dedicated to representing their home town. The group are a spaza rap crew — the name comes from spaza shops — and rap in a mixture of isiXhosa, Sesotho, English and the street language known as tsotsitaal. Used in rap, it’s a whip-quick and surprisingly fluid language.

Although El Nino speaks warmly of the group’s core audience, he’s not completely happy with the way hip-hop in the country is going. ‘Because we’re outside Jo’burg, we’re not getting the airplay we deserve,” he says. ‘They’re not giving us time, because we don’t sound American — we’re South African to the core. We talk about real social ills that are affecting my people. And South Africa, my friend, is about mediocrity. Mediocrity sells here.”

El Nino is adamant that the way forward for South African groups is to focus on their own stories. Hip-hop has also managed to spawn several active South African subgenres, including spaza and motswako (the country’s biggest star, HHP, is a motswako rapper), and El Nino feels that is a good thing for the music.

‘Each and every kasi [township] represents one scene, but in different forms,” he says. ‘It’s like Manchester — we know it’s English, but if you’re in Manchester, there is slang that is being used. They’ve got their own way of doing things, just like people in Chelsea or Bristol. To us, Cape Town, we have our own slang and dialects and style. Hip-hop started in the Bronx, but now it’s in Africa. Why can’t we do it our own way?”

Maybe — but there’s no denying the American influence on South African rap. Although Driemanskap and their label mates faithfully represent their cultures, they struggle to get large sales figures (Igqabhukil’ Inyongo sold just fewer than 2?000 copies). The country’s rising stars — young acts with the most commercial potential — are those that draw heavily on mainstream American rap. Songs from artists such as Blak Lez, Explicit, Morale and Jozi (a group that includes the son of legendary singer Brenda Fassie) would sound as appropriate bursting from a boombox in Brooklyn as they would coming from a car driving through Soweto.

So would AKA. The talented young rapper (born Kiernan Forbes) first came to fame as a member of the group Entity. Moving on to partner with production supremos the IV League, AKA is about to release his debut album, Alter Ego. His music relies heavily on chart-friendly beats and he sounds like a young Jay-Z.

International recognition
He laughs off the comparison, but he doesn’t think drawing on American artists is a problem for South African hip-hop. ‘Copying US artists doesn’t cheapen the industry at all,” he says. ‘There’s Africanness in Jozi’s music, too. And besides, no South African artist can say they aren’t influenced by overseas music.”

He switches perspectives a little when talking about South Africans getting international recognition –and, unlike Driemanskap, he believes the best way is to rap in English. ‘It gets people in South Africa to take your music seriously,” he says. ‘American artists don’t think about recognition — they just rap about their surroundings. And it works. If artists blaze their own trail, they stand a better chance of international recognition, but you have to speak the international language, which is English. If you speak vernac [slang for African languages], you get put into a world-music box.”

But artists trying to get some international shine on their music can get burned, too. HHP paid American rapper Nas close to $10?000 for a verse on the former’s album, Dumela — only to find that Nas had reused the verse on his own album with Damian Marley, Distant Relatives. But it’s just another obstacle. And if there’s one thing South African artists have proved, it’s that they can overcome obstacles. —

Driemanskap: Speaking Xhosa to the world

Breathing life into the ANC abroad

Getting high on Rio