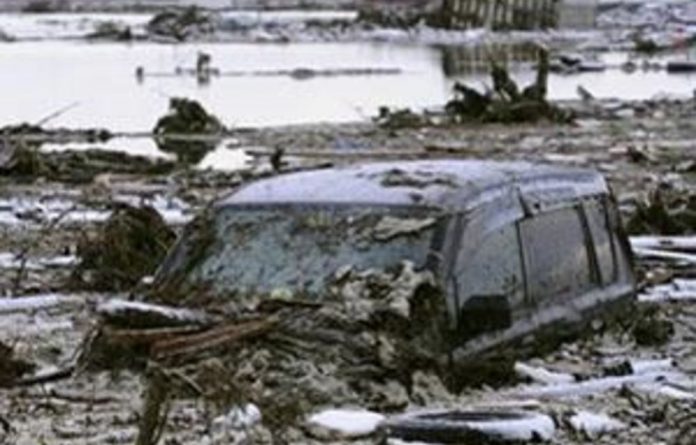 Survivors of Japan’s devastating earthquake and tsunami huddled in shelters and hoarded supplies on Saturday as rescue workers searched a mangled coastline of submerged homes, cars and stranded boats.

Aerial footage showed buildings and trains strewn like children’s toys after powerful walls of seawater swamped areas around the worst-hit city of Sendai, about 130km from the earthquake’s epicentre.

“Everything is so hard now,” said Kumi Onodera, a 34-year-old dental technician in Sendai, a port of one million people known as the “City of Trees” and cradled by dormant volcanoes.

Onodera said her ordeal the night before was “like a scene from a disaster movie”.

“The road was moving up and down like a wave. Things were on fire and it was snowing,” she said. “You really come to appreciate what you have in your everyday life.”

Adding to the panic, radiation leaked from an unstable nuclear reactor in Fukushima prefecture, near Sendai.

In districts around Fukushima city, survivors lined up for drinking water in town centres, filling teapots and plastic containers. Japan deployed tens of thousands of Self-Defence Force officers to search for missing people.

In Iwanuma, not far from Sendai, nurses and doctors spelled SOS on the rooftop of a partially submerged hospital, one of many desperate scenes. Across the north-east, worried relatives checked information boards on survivors at evacuation centres.

Hundreds of fishing vessels, many upturned, stood stranded in fields, pummelled by the 10m tsunami.

Japan’s Kyodo News said about 300 000 people were evacuated nationwide, including 90 000 from areas near the nuclear plant, many seeking refuge in shelters, wrapped in blankets, some clutching each other sobbing.

Helicopters plucked survivors from an elementary school in Sendai. About 100km further south in Koriyama, families slept in sleeping bags in a stadium.

At least 1 700 people were feared killed by the earthquake, the world’s fifth-most powerful in the past century. As many as 3 400 buildings were either destroyed or badly damaged, Kyodo reported. About 200 fires had broken out, including three that still raged in the north-eastern city of Kesennuma , Kyodo said.

In one town, Minamisanriku in Miyagi prefecture, as many as 9 500 were people could not be contacted, about half its population, Kyodo reported.

Cellphones remained down for much of the region and more than five million people were without power.

In Mito, another town in the area, long lines formed outside a damaged supermarket as hundreds waited for medicine, water and other supplies. Supplies ran low as people stocked up, not knowing how long it would take for fresh goods to arrive.

“All the shops are closed, this is one of the few still open. So I came to buy and stock up on diapers, drinking water and food,” Kunio Iwatsuki (68) told Reuters.

In Rikuzentakata, a nearly flattened village in far-northern Iwate prefecture, survivors scrambled to retrieve their belongings, at times clambering over uprooted trees and overturned cars to reach levelled homes.

The Japan Rail service was in chaos, some of its cars buried in mud or laying twisted on farmland. Four trains in Miyagi and Iwate prefectures were missing.

Oil leaked from a refinery into the harbour of Shiogama City in Miyagi.

In Tokyo, where many have long feared the prospect of another monster earthquake of the scale that killed about 140 000 people in 1923, residents struggled to come to terms with damage inflicted on the country and their city.

Some were relieved the damage in the capital was not greater, but many remained panic-stricken about the continuing chaos elsewhere, especially as radiation leaked from the nuclear reactor in Fukushima prefecture.

“People make manuals for earthquakes, but when the earthquake actually happens, can you actually follow the manual?” said 60-year-old officer worker Kiyoshi Kanazawa.

“Everyone runs away when things are shaking, and they ask you to stop the gas and fire in your house, but you do not have enough space for this in your brain.” – Reuters