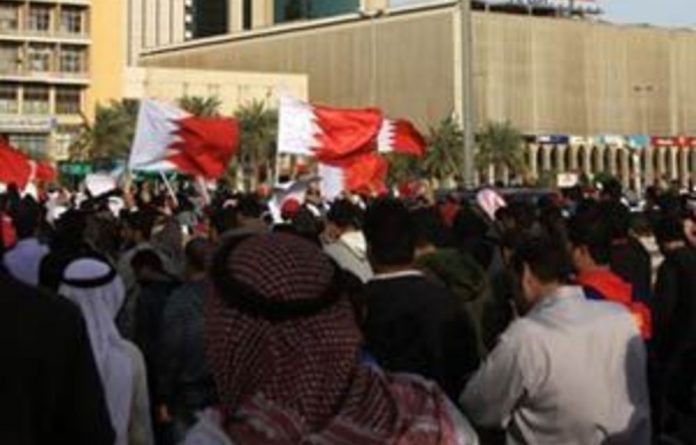 Bahrain arrested at least six opposition leaders on Thursday, a day after its crackdown on protests among the Shi’ite Muslim majority drew rare United States criticism and raised fears of a regional conflict.

State television said “leaders of the civil strife” had been arrested for communicating with foreign countries and inciting murder and destruction of property. It did not say how many had been arrested or name them.

Bahraini forces used tanks and helicopters to drive protesters off the streets and clear a camp that had become a symbol of their demand for more democratic rights in the Sunni-ruled kingdom.

Three police and three protesters died in the crackdown.

The crackdown prompted sympathy protests from Shi’ites across the region, including in oil power Saudi Arabia, and Iran has complained to the United Nations.

It asked countries in the region to join it in urging Saudi Arabia to withdraw troops from the island state, reports said.

“How could one accept a government to invite foreign military forces to suppress its own citizens,” Iran’s Foreign Minister Ali Akbar Salehi said in a letter to UN Secretary General Ban Ki-moon, also addressed to the Arab League and the Organisation of Islamic Conference.

Oil price increase
Oil was up over $100 on Thursday as the Gulf tensions fuelled fears of further supply disruption while investors weighed the impact on energy demand from quake-hit Japan. Capital flight from Bahrain is starting to pressure its currency and threaten its position as a Gulf financial centre.

Most Western nations have urged their citizens to leave Bahrain, and a spokesperson said the British embassy had organised charter flights to Dubai for its citizens without other options.

Protesters are asking for the monarchy to move to a parliamentary system where Cabinet is made up of elected officials, though some want a republican system. Government is at present appointed by the king and parliament has few powers.

The opposition say the current system is designed to water down the influence of Shi’ite Muslims, who say they are discriminated against in jobs, housing and politics. The government denies this.

Pearl square was a scene of devastation. Some tattered tents remained on the grass as diggers uprooted palm trees that surrounded the pearl statue where activists had been celebrating into the night only days before.

Troops were only allowing residents in and a long line of cars was backed up behind a checkpoint, waving through drivers heading to work in the financial district, where the protesters had tried to extend their sit-in early this week.

The military on Wednesday banned all protests and imposed a curfew from 4pm to 4am across a large swathe of Manama.

Mansoor Al-Jamri, editor of main opposition newspaper Al-Wasat, said plainclothes men with weapons were in the streets around his offices, holding up the paper’s production.

“We are trying to get in contact with the ministry of interior to give us protection against the thugs,” he said.

Opposition detained
Among those detained overnight were Haq leader Hassan Mushaima and Wafa leader Abdel Wahhab Hussein, who had led calls for the overthrow of the royal family, the largest opposition party Wefaq said.

More moderate Wefaq had limited its demands to wide-ranging political and constitutional reform. Also arrested was Ibrahim Sharif, head of the secular leftist party Waad that signed up to the same demands as Wefaq.

“Two of the thugs climbed over the fence to get in our yard, one went over and pointed a gun in Ibrahim’s face and the other went to our garage to let everyone else in,” Farida Ismail, Sharif’s wife, told Reuters by telephone. “They were going around, wrecking things in the house.”

The interior ministry could not immediately be reached for comment and the charges against those arrested were not known.

In Geneva, UN High Commissioner for Human Rights Navi Pillay urged Bahrain on Thursday to rein in its security forces, citing allegations that they had killed, beaten and carried out arbitrary arrests of protesters, and attacked medical workers.

She voiced alarm at what she called the illegal “military takeover of hospitals” in the kingdom.

“This is shocking and illegal conduct,” Pillay, a former UN war crimes judge, said in a statement.

The unrest has brought an influx of troops to Bahrain from Sunni-ruled neighbours Saudi Arabia and the United Arab Emirates, which fear the uprising that began last month could play into the hands of non-Arab Shi’ite power Iran.

Kuwait, which has an Shi’ite minority, has not sent any troops. Neither has Qatar or Oman.

US President Barack Obama called the kings of Saudi Arabia, a strategic ally of Washington in the Middle East, and of Bahrain, home to the US Navy’s Fifth Fleet and seen as a bulwark against Iranian influence, to urge “maximum” restraint.

But the violence appeared to dash hopes for political talks Washington hopes will take place.

Secretary of State Hillary Clinton said force was not the answer and that Bahrain and Gulf countries who sent in troops to back the Sunni royals were “on the wrong track”. A medical source said dozens of people were taken to Bahrain International Hospital on Wednesday, hit by rubber bullets or shotgun pellets or suffering teargas inhalation — all weapons used by riot police. One was hit by a live bullet.

Protesters threw rocks and petrol bombs at police who were clearing the protest camp and killed three by running them over in cars at high speed, witnesses and medical sources said.

Shi’ite anger
Over 60% of Bahrainis are Shi’ites. Most say they want only the same treatment as Sunnis and a constitutional monarchy but calls by hardliners for the overthrow of the monarchy have alarmed Sunnis, who fear the unrest serves Iran.

Analysts say the intervention of Sunni-ruled Gulf Arab states in Bahrain might provoke a response from Tehran, which supports Shi’ite groups in Iraq and Lebanon.

“This was a major and a dangerous decision because this issue has been internationalised now. There are protests in Iraq, in Iran, in Lebanon,” Wefaq MP Jasim Hussein said.

In Lebanon, supporters of Shi’ite group Hezbollah came out in solidarity with their fellow Shi’ites. And Iran condemned Bahrain’s response to the protests, recalling its ambassador for consultations.

Saudi Shi’ites held several demonstrations on Wednesday night, including one in their main regional centre of Qatif where major Saudi oilfields are located, demanding the release of prisoners and voicing support for Shi’ites in Bahrain.

“People were demanding the withdrawal of the Peninsula force and called on Saudi Arabia to withdraw from Bahrain,” one witness said, referring to Gulf Arab forces in Bahrain. — Reuters