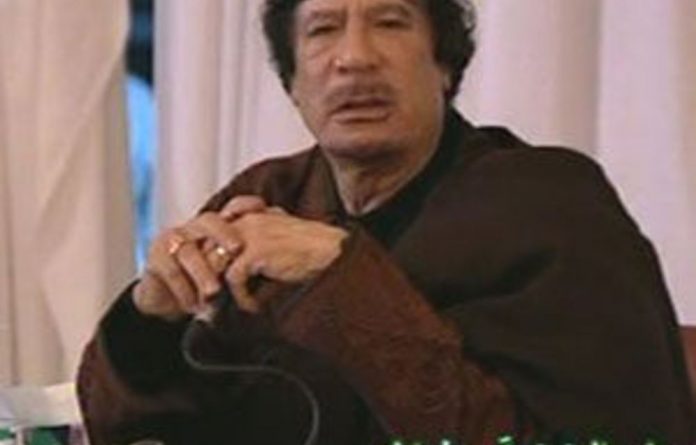 Libyan strongman Muammar Gaddafi said his forces would fight a “decisive battle” on Thursday, as diplomats backing a no-fly zone to rein him in pressed for a vote at the United Nations Security Council.

Gaddafi’s latest comments came after his forces pressed rebels in the west on Wednesday and threatened their eastern bastion of Benghazi, despite calls from UN chief Ban Ki-moon for an immediate ceasefire.

“The battle starts today [Wednesday] at Misrata and tomorrow, that will be the decisive battle,” said Gaddafi, state television reported, referring to the country’s third city, which has a population of half-a-million.

“From this evening, you are going to be called to take up arms and tomorrow you will take part in the battle,” he added, addressing a group of young people from Misrata, the report said.

Gaddafi urged his audience “not to leave Misrata hostage in the hands of a handful of madmen”.

On Tuesday, Libyan state television said the army would soon move against Benghazi, and on Wednesday, Gaddafi’s son, Seif al-Islam, predicted that everything would be over in 48 hours.

A rebel spokesperson in Misrata, which lies 150km from the capital, Tripoli, said on Wednesday they had beaten back an attack by loyalist forces on the city, but four people had been killed and 10 wounded.

In Zintan, meanwhile, the first western town to go over to the opposition, a witness said “things were starting” there.

And over to the east, witnesses in Ajdabiya, the gateway to Benghazi, said fighting was still going on there. Government sources continued to insist that it had fallen on Tuesday.

A doctor told Agence France-Presse by telephone that fighting was still going on Wednesday in and around in Ajdabiya, which also guards the road to Tobruk and the Egyptian border in the rebel-held east.

“We received four bodies today, all rebel fighters,” Abdelkarim Mohammed said, adding that 22 dead, mainly civilians killed by artillery or air strikes, had been brought in on Tuesday.

“A campaign to bombard such an urban centre would massively place civilian lives at risk,” he said. “The secretary general is urging all parties in this conflict to accept an immediate ceasefire and to abide by Security Council resolution 1970.”

The February 26 resolution called for an end to Gaddafi’s onslaught against opponents and imposed sanctions against his regime.

In Cairo on Wednesday, US Secretary of State Hillary Clinton said: “We want to do what we can to protect innocent Libyans against the marauders let loose by the Gaddafi regime.

“And yes, time is fast upon us. There is an urgency to it,” she told CBS television.

Clinton stopped short of explicitly backing a no-fly zone, saying only that it was one of several options under consideration.

But she said the Arab League’s endorsement of action against one of its own members, including a no-fly zone, had a major impact on the views of the major powers on the Security Council.

Hours later, at the United Nations in New York, the US position appeared to have hardened against Gaddafi.

Washington joined Britain and France in pressing for a Security Council vote on Thursday on a no-fly zone to halt Gaddafi’s attacks.

Even Susan Rice, US ambassador to the UN, said that action might have to “go beyond, a no-fly zone at this point, as the situation on the ground has evolved, and as a no-fly zone has inherent limitations in terms of protection of civilians at immediate risk”.

Britain, France and Lebanon, on behalf of the Arab League, have been seeking to overcome resistance to a no-fly zone.

“What we want to do is move as fast as possible and we will be stressing the urgency of the need for action this morning,” British Ambassador Mark Lyall Grant said in New York.

French President Nicolas Sarkozy, in a letter to the leaders of the other countries on the 15-nation council, said: “Together, we can save the martyred people of Libya. It is now a matter of days, if not hours.”

But German Foreign Minister Guido Westerwelle said “we have no wish to and we cannot take sides in a North African civil war”.

A no-fly zone would amount to military action and ground forces could be needed as a follow up if it failed.

“We do not wish to start down a path which would eventually lead to German soldiers taking part in a war in Libya,” he said.

Russian Foreign Minister Sergy Lavrov has requested more information from Arab states on how a no-fly zone would be policed.

Reservations
China, which like Russia wields a veto on the Security Council, has also expressed reservations about any intervention.

The two-part draft resolution calls for a no-fly zone and toughened sanctions against the Gaddafi regime, according to diplomats at the UN, which says the conflict has cost more than 1 000 lives.

In New York, deputy Libyan UN ambassador Ibrahim Dabbashi warned that “in the coming hours we will see a real genocide if the international community does not act quickly”.

Dabbashi, who defected early on from the Gaddafi regime, said “about five” Arab states were ready to help police the no-fly zone if it was adopted.

Hundreds of people were streaming over the Egyptian border after fleeing Ajdabiya, Benghazi and other cities, an AFP correspondent said.

That brought a warning from White House spokesperson Jay Carney.

“American journalists need to be allowed to do their work, not harassed or detained,” he said. — AFP

Public finance is key to delivering the human right to health

Mandela left us the fabric for a new SA