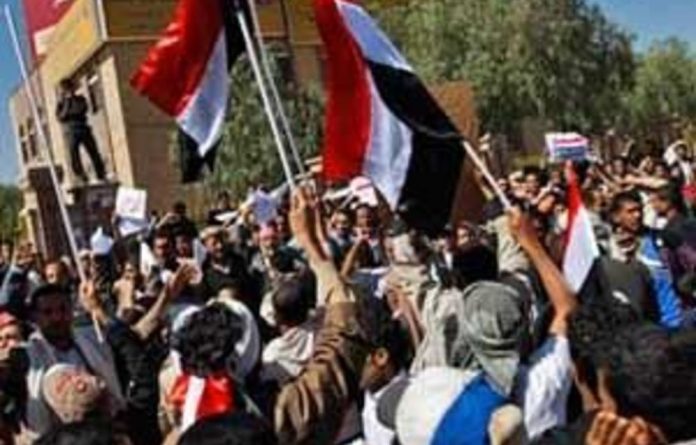 Top generals, ambassadors and some tribes threw their support behind Yemen’s anti-government protesters on Monday in a major blow to President Ali Abdullah Saleh’s efforts to ride out demands for his immediate exit.

The president, a perennial survivor who has stayed in power for 32 years throughout a civil war, numerous uprisings and militant campaigns, has seen a string of allies break ranks with him in recent days.

France became the first Western power on Monday to call publicly for Saleh to stand down.

“We say this to Yemen, where the situation is worsening. We estimate today that the departure of President Saleh is unavoidable,” French Foreign Minister Alain Juppe said at a European Union meeting in Brussels.

Yet pan-Arab TV channel Al Arabiya quoted him as saying the majority of Yemenis were with him and he would remain steadfast. A government official said the president had asked Saudi Foreign Minister Saud al-Faisal to mediate in the worsening crisis.

Oath before God
Defence Minister Mohammad Nasser Ali said the army still backed Saleh, setting the stage for a possible standoff with those commanders who threw in their lot with tens of thousands of protesters who have taken to the street for weeks.

“The armed forces will stay faithful to the oath they gave before God, the nation and political leadership under the brother president Ali Abdullah Saleh,” the minister, dressed in military fatigues, said in a statement read on state TV.

“We will not allow under any circumstances an attempt at a coup against democracy and constitutional legitimacy, or violation of the security of the nation and citizens.”

Yemeni television showed Saleh swearing in new members of the appointed Shura Council, Yemen’s upper house of Parliament, in an apparent effort to demonstrate he was still in charge.

The latest defections seemed to be sparked by Yemen’s violent response to protests on Friday, when plainclothes snipers killed 52 protesters in Sanaa, prompting Saleh to sack his cabinet and declare a 30-day state of emergency.

Major setback
But the televised announcement of the defection of powerful General Ali Mohsen on Monday was a major setback to Saleh.

“We announce our peaceful support for the peaceful revolution of the youth,” Mohsen, commander of the northwest military zone, said on Al Jazeera, adding that the army would act to ensure stability in the capital. “Repressing peaceful demonstrators … is pushing the country toward civil war.”

Mohsen is a kinsman of Saleh from the influential al-Ahmar tribe, whose members hold many key positions in the state.

Protesters who had gathered near Sana’a University, now the heart of the anti-government movement, cheered wildly upon news that Mohsen was supporting them and protesters broadly said they trusted the army to keep them safe.

“This is an announcement of victory of the people’s revolution,” said opposition spokesperson Mohammed al-Sabry.

‘The day to protect the revolution’
On the outskirts of the protest area, soldiers dressed in camouflage and armed with assault rifles casually checked passers-by as they entered the rally zone but there was little sign of tension between them and the protesters.

“Oh leaders of the armed forces, today is the day to protect the revolution,” a protest leader told the crowd over a microphone. Protesters made V for victory signs.

Mohsen’s al-Ahmar is a tribal group in the Hashed federation, a key pillar of Saleh’s rule which has relied on balancing tribal forces — in detriment to state-building and national unity, critics say.

But al-Ahmar support for Saleh appears to be crumbling, with tribal chief Sheikh Sadeq al-Ahmar expressing support on Al Arabiya for the protest movement.

Arabic satellite channels said two other generals announced their support for the protesters, including another al-Ahmar — Mohammed Ali Mohsen al-Ahmar, commander of the eastern military district, and Hamid al-Qosheibi, commander of the Amran region.

No clear successor
Saleh has no clear successor, one reason why his closest allies — the United States and Saudi Arabia — have appeared nervous about his stepping aside in the face of the uprising, although he has pledged to stand down in 2013.

Western countries are concerned over the unrest in Yemen given the absence of an alternative leader and because of Saleh’s help in fighting al-Qaeda.

Washington and Riyadh, Yemen’s main financial backer, have long seen Saleh as a bulwark against a dynamic al-Qaeda network in the Arabian Peninsula. The United States has called for dialogue on a “peaceful transition”.

On Monday, Yemen’s ambassadors to Syria, Saudi Arabia, Lebanon, Egypt, the Arab League and China were among senior diplomats to resign or express support for the protest movement, as well as Abdullah Alaiwa, a former defence minister and adviser to the army staff, Al Jazeera said.

“I am resigning after the massacre that happened at the Taghyir [Change] Square,” Abdel-Wahhab Tawaf told Al Jazeera from the Syrian capital Damascus.

Poverty and unemployment
The governor and his deputy in Aden, a port city at the centre of the secessionist movement, and the deputy speaker of parliament, the attorney general, and several ruling party MPs were among others who expressed support for the protesters.

Yemen has been in ferment since popular revolts in Egypt and Tunisia removed those countries’ entrenched rulers.

From an early stage Saleh made verbal concessions. Last week he offered a new constitution giving more powers to parliament, as well as announcing an array of handouts.

But he has rejected opposition plans for a phased transition of power this year, even as he haemorrhaged support.

His government has failed to meet basic needs of Yemen’s 23-million people. Unemployment is around 35% — rising to 50% for young people. Oil wealth is dwindling. Water is running out and more than two-fifths of Yemenis live in poverty. — AFP