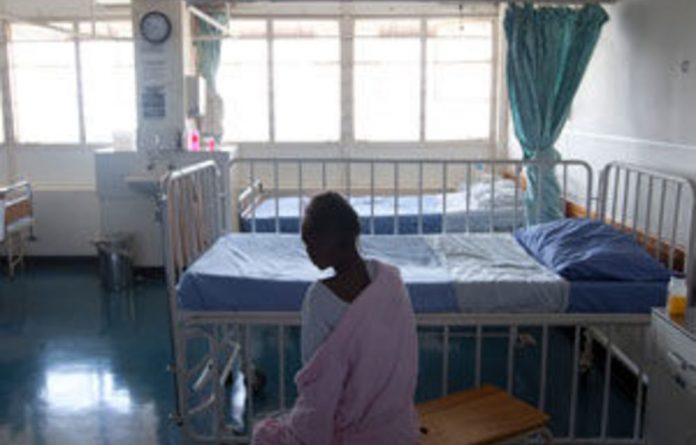 Sibongile has been diagnosed with tuberculosis (TB) three times; this year she found out she has multidrug-resistant TB (MDR-TB).

We are sitting in a well-ventilated office in Durban’s King George V hospital in the MS3 unit — which is dedicated mainly to drug-resistant TB patients — with 29-year-old Sibongile and a fellow patient, 17-year-old Thando. Listening in on our conversation are Dr Venkates Chalid, the doctor in charge of the ward, and Balungile Mnembe, the sister-in-charge. All five of us have our masks on as a precautionary measure against the airborne disease, leaving only our eyes exposed.

King George V hospital is the largest TB facility in the country and it specialises in treating MDR-TB and XDR-TB (extensively drug-resistant TB) patients. The hospital is currently undergoing upgrades, and on completion it will have 320 beds — from the 192 currently available — for MDR-TB/XDR-TB patients.

Mnembe, who started working at the hospital in 1997, says she remembers the very first TB patient she saw. She says the memory of blood coming through the mouth has stuck with her ever since.

The two patients, dressed in their hospital gowns, request that they not be identified due to the stigma attached the disease. It is Sibongile who speaks first. “This is the third time that I’ve had TB. When they checked my sputum they found out that I was resistant to some of the drugs and I had to come in to the hospital.”

TB is an infectious, airborne bacterium that can spread to any organ of the body, but is most often is found in the lungs. South Africa is ranked third on the list of 22 high-burden TB countries around the world, behind India and China, with KwaZulu-Natal the province carrying the biggest burden, most especially the eThekwini municipality.

One percent of the South African population gets TB every year.

TB is a curable disease when treatment is properly adhered to.

Although the disease has been around a long time, Chalid says that about two decades ago there was not much talk about TB. But with the rise of HIV this changed. He believes that the secret is in controlling and treating HIV in its early stages. “HIV is the main tree, TB is a small branch,” he says.

About 99% of the TB patients at the hospital have MDR-TB/XDR-TB, and 70% of them are co-infected with HIV.

According to the World Health Organisation (WHO) MDR-TB — which Sibongile and Thando are currently having treated — is resistant to at least two first-line anti-TB medicines. This type of TB often develops in patients who do not properly adhere to treatment for regular TB, have failed first-line treatment, or contracted the disease unknowingly.

The course of treatment for this type of TB can last up to two years. “The doctor told me we normally stay in the hospital for three to six months,” says Sibongile, who has been in the hospital since February 14.

Seeing family
Thando discovered her TB in 2009 and developed MDR-TB this year. She has been in the hospital since February 11 when she began her treatment. She says it is unfortunate that she will be missing out on school as she was doing grade nine and cannot attend class.

Sibongile, on the other hand, is studying to become a social worker through Unisa and also had a part-time job before she was admitted. “I’m trying to do assignments while I’m in hospital, but for practicals, where I have to attend class, I’ll have to drop out because I can’t attend while I’m contagious,” she says.

For both these women, TB has been life-changing. “Especially because we have MDR-TB,” says Thando. “You are isolated; you can’t be close to young people, diabetics and HIV-positive people because they are easily infected.”

Sibongile agrees. But she adds, “Along the way we are learning that this is the best thing for us and being in hospital is better because we take injections daily; it’s unlike going to the clinic by yourself where no one can monitor you.

“Although we miss home very much, we miss our families.”

Answering a question around reasons why patients may try to leave hospital against medical advice while still infectious, Mnembe highlighted socio-economic motives, such as where the breadwinner or the recipient of a grant has been hospitalised.

Patients are administered injections for six months, and tablets for 24 months. “Failing to do that can lead to extensively drug-resistant TB [XDR-TB], so you have to finish the treatment, even if you feel like you are getting better,” says Sibongile.

XDR-TB is resistant to all first-line drugs and some second-line antibiotics, a resistance that results from poorly managed treatment of TB and MDR-TB. South Africa experienced an outbreak of XDR-TB in 2006, which alerted the global community to the problem.

Symptoms
TB symptoms include weight loss, coughing for two weeks or more, loss of appetite and night sweats. “It’s not always the case that you experience all of them,” says Sibongile. She says she only found out that she had the disease when she went to the clinic and listed her symptoms.

“In my case they were checking the sputum and it came up negative and they had to do x-rays. So sometimes it [the disease] does hide,” she says. Thando adds that some people do not have a cough, yet they will experience some of the symptoms.

The two say they do feel a stigma has been attached to them because of the disease. “Some people don’t know what it is and they associate it with HIV,” says Sibongile.

Thando says another issue is that there is not enough information about TB in rural areas. “They don’t understand what the disease is, especially MDR-TB.”

“Even in the townships as well, not a lot of people know,” says Sibongile. “It was better before because it was just TB; now there’s MDR-TB.”

Mnembe says that besides motivation and encouragement about treating the disease, it is education that keeps patients on treatment. The medical staff also educate family and support structures when patients attend the hospital for a visits

Mnembe says it is unfortunate that most healthcare workers are not interested in working in TB hospitals because of the nature of the disease — she says it is not just some nurses who are afraid, but also some doctors.

However, she admits that it is not easy — one of the side-effects of TB drugs is deafness. Mnembe finds the masks are a hindrance when it comes to communicating with patients who are at this stage, as she believes that it would be easier to be understood if the patients could lip-read.

But Chalid says there is always a chance against the disease, and his staff will always do their job. The rest is up to God. “I always tell my patients these four things: prayer, medicines, food and rest,” he says.