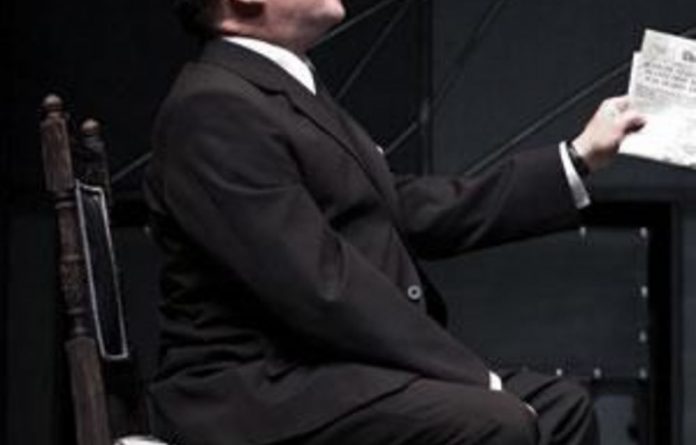 In a sense life paralyses all of us. Our incessant exposure to the horrors that fill television and internet screens leaves us feeling hopeless in the face of gratuitous cruelty and galling injustice on a global scale.

Broken Glass (1994), written by Arthur Miller when he was 78, is set in Brooklyn in November 1938. News of the persecution of the Jews in Germany and specifically the events of Kristallnacht, from which the play takes its title, when Jewish shops were looted and synagogues ransacked during a Nazi-instigated rampage, has made the New York Times.

Sylvia Gellburg (Susan Danford) is obsessed with the news. She succumbs to hysterical paralysis of her lower limbs, apparently brought on by her distress at events in Europe. This in an era in which the stigma and prejudice surrounding mental disorders was pervasive.

Flashes of passion
Danford is an incandescent mix of delicate vulnerability and commanding personality. She may be bedridden or wheelchair-bound, but her dramatic presence seems to have the free range of the stage; it is audience members who find themselves riveted, immobilised by her flashes of passion.

Miller briefly flirts with the conceit that perhaps Sylvia’s response is the sane one and those going about their business trying to remain unaffected by the atrocities abroad — one easily forgets how strong American isolationism was at the time — are in some sense sick.

Her husband, Phillip (Antony Sher), is filled with self-loathing. He even goes as far as to insinuate that perhaps the Jews have provoked their harassment: “It’s no excuse for what’s happening over there, but German Jews can be pretty — you know — [stuck up].”

Above all, Phillip doesn’t want to be dragged back by reminders of his people’s suffering.

When ingratiating himself with his boss, the Ivy League Stanton Case (Patrick Lyster), who facilitated Jerome’s career but talks about “you people”, Phillip transforms into the fawning Jewish stereotype he so hates.

One miserable little pisser
Sher’s goal is to have Phillip become not only what he hates but also what hates him — hence his black clothes and more than a gestural nod suggestive of the Führer. Sher brilliantly harnesses the force of both prototypes.

“That’s one miserable little pisser,” as Margaret Hyman (Anthea Thompson), the wife of the physician on the case, sums him up. “I like to talk and I like to laugh,” she says. Thompson is completely at home as Margaret, the comic relief.

Phillip suffers his own manifestation of psychosomatic paralysis — erectile dysfunction and impotence.

Artful silences
Perhaps, the play keeps hinting rather crudely, this is the root cause of Sylvia’s condition.

Sher inhabits his nasal, whining character absolutely. Most powerful are his artful silences. His personal commitment to the part is obvious. In an interview two years ago Sher told me how, when he first moved to the United Kingdom, for many years he tried to deny his own identity — a gay, Jewish South African: “The classical actors — were all such tall, handsome, essentially British men, whereas I was this little Jewish whelp from Sea Point.”

Broken Glass is at its heart about denial in its many forms and disguises. In relationships denial leads to personal failure and the resulting regrets turn to recriminations. Sylvia’s paralysis catches Phillip wrong-footed. The marriage shatters like a Jewish shop window in Berlin.

The doctor called in to diagnose and treat Sylvia, Harry Hyman (Stephen Jennings) only precipitates the crisis as unprofessional feelings develop between him and Sylvia. It is good to see Jennings (who is married to Danford in real life) on stage again and he certainly has his work cut out for him. Hyman is an awkward part. Miller uses him alternatively as a foil for ­Sylvia and Phillip.

This is true too for Sylvia’s younger sister, Harriet (Claire Berlein), whose function it seems is chiefly explication, providing background and off-stage information to sustain Miller’s ­argument and plot.

Fatal blow
Miller is at his best when his characters enter that deeply ironical position of people who surrender their own desires and instead allow their better selves to protect their nearest by ­disregarding the truth.

The fatal blow dealt Phillip is when aspersions are thrown on his loyalty to the firm and he loses the confidence and approval of his employer. His heart is literally broken. Phillip realises he has been used all these years and remains as much an outsider as ever:

“[If] You got some lousy rotten job to do”, like “close down a business” or “throw someone out of their home”, then ‘send in the Yid”.

Powerfully worded as the text is, it is governed more by reason that intuition. You can hear the logic of the arguments Miller is peeling open, sometimes to the point of forcing his characters.

Brooding presentation
Director Janice Honeyman has paced the production well, which is a challenge given Miller’s 11 scene changes, each of which is introduced by a lone cellist, specified in the text, presumably to represent Sylvia’s soul-filled tristesse, but which becomes a means of brooding presentation growing gradually more intrusive.

Dicky Longhurst’s set, suggesting shards of glass, is chilling, if a bit too obvious.

No glib proscriptions
Appallingly, anti-Semitism never seems to go completely out of fashion, whether it’s buffoons like Charlie Sheen (who recently tweeted that his manager was a “Jew pig”), John Galliano and Mel Gibson, or politicians such as Robert Mugabe and Mahmoud Ahmadinejad. The play gives no glib proscriptions, except to suggest that hope must rely ultimately on compassion.