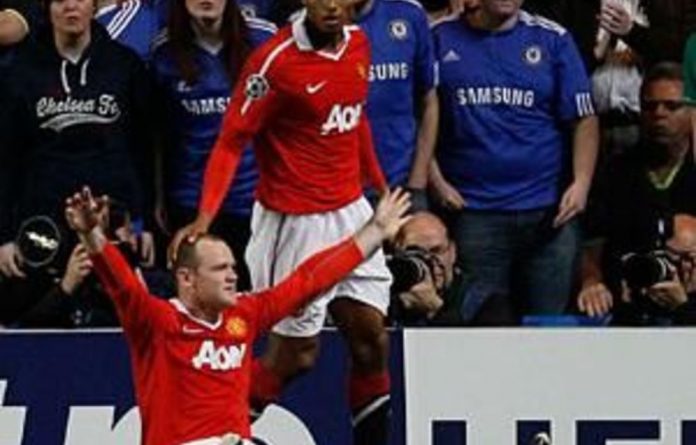 Rooney had come under fire — and earned a two-match ban, along with front-page headlines — for a foul-mouthed tirade at television cameras after scoring his hat-trick in a 4-2 win over West Ham last week.

After firing home decisively at Stamford Bridge, the England forward resisted any temptation to scream out his feelings as he raced towards the cameras behind the goal after sweeping home Ryan Gigg’s low cross in the 24th minute.

For Ferguson, Rooney “was important on the counter-attack and he was in tremendous form and he has given us a great chance of reaching the semi”.

He added: “It’s still in the balance [but] it’s a good result for us. That away goal does mean something.”

Although the goal count in London was lower, the full-blooded nature of the encounter kept the fans on the edge of their seats as both sides set about their business with gusto.

United, who saw off Chelsea in a penalty shootout in the 2008 final, gambled on the fitness of England veteran Ferdinand following more than two months struggling with a calf injury, and his experience was a boon in a tense affair.

Rooney’s strike gave United their first win at Chelsea in nearly a decade and the three-time European champions are now clear favourites to advance to a likely semifinal against Schalke.

Chelsea came agonisingly close to levelling moments before the break when Didier Drogba crossed into the danger zone, only for misfiring sidekick Fernando Torres to fail to get a touch, the ball bouncing on to clip Edwin Van der Sar’s far post.

Frank Lampard half-connected with the rebound but United’s French fullback, Patrice Evra, was alert to the danger, clearing off the line.

Chelsea went out to Jose Mourinho’s eventual champions, Inter Milan, last season in the last 16 while United exited in the quarters to Bayern Munich.

This time, Ferguson had underlined the importance of the away goal — and Javier Hernandez could even have made it 2-0 three minutes before the interval but United’s Mexican “Little Pea” just failed to get his head to Rooney’s cross.

The arrival of Nicolas Anelka — for Drogba — almost sparked a Chelsea revival as the French veteran teed up Torres, but Van der Sar made a fine stop from the Spaniard’s header.

After Chelsea were denied a penalty — when United defender Patrice Evra clashed with Ramires in the box — Torres earned a late booking after going to ground under a challenge from Valencia and complaining vociferously.

Iniesta then clipped a neat ball into the box for the marauding Dani Alves to collect and stroll past keeper Andriy Pyatov before firing home for 2-0 11 minutes before the interval.

At the other end Luiz Adriano wasted a fine chance to level when he blasted wide when well-placed after 10 minutes. But Barca survived that scare and were in cruise control once Gerard Pique made it 3-0 soon after the restart.

Yaroslav Ratkitskiy bundled in for the visitors before Seydou Keita smashed home Barca’s fourth and Xavi completed the rout on 86 minutes.

The only downside for Barca came when Iniesta earned a yellow card, which means he will miss the second leg through suspension. — AFP