At the front of migration 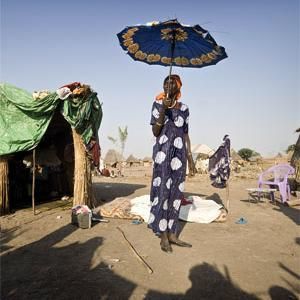 An exhibition of life in conflict zones, launched on World Health Day (April 7), explores emigration. The show, titled Solidarity for Survival, is an initiative of Médecins Sans Frontières (MSF) and includes photographs of migrants, installations and performances.

Brecht’s moving poem, Concerning the Label Emigrant, begins: “I always found the name false which they gave us: Emigrants. That means those who leave their country. But we/ Did not leave, of our own free will/ Choosing another land.”

The person in the poem says that he hasn’t crossed a border to go into a different country “to stay there, if possible for ever”. In exile, the migrant waits, eyes strained and ears attuned to every perceptible shift in the home country, “awaiting the day of return”.

Displacement and migration
The revolution in Libya and the instability that followed the ousting of Tunisian strongman Zine El Abidine Ben Ali continues to create untenable conditions, resulting in thousands of people leaving, most of them for Europe. This week it was reported that 400 migrants, among them Eritreans and Ethiopians, had disappeared in the Mediterranean and were feared drowned.

The exhibition, gleaned from photographs taken in Zimbabwe, Somalia, South Sudan, the Democratic Republic of Congo (DRC) and South Africa, was launched to highlight the plight of those “who survive displacement and migration and come to South Africa, where they face discrimination and xenophobia”. Returning to the source, it looks at the reasons why people leave their places of origin.

Because MSF is primarily an organisation that brings medical relief to those in need, there is an emphasis on the experiences of the infirm, the young and pregnant women, who take refuge in makeshift facilities and in the open.

The work in this exhibition isn’t easy to look at. Take the photograph of Pierrette, a picture of a Congolese girl, perhaps 15 years of age, who for two months lived with a man who repeatedly raped her. “I slept with a man at night. It was always the same one. During the day, others would hit me and he would act as if he didn’t know me. He spent his days with another woman, a mother with children. And at night he slept with me.”

Sitting and waiting
If it’s not this, it’s the image of emaciated infants, gaunt bodies of people atrophied by HIV/Aids, adults receiving medical attention from MSF (a self-referential nod at their work in Africa’s trouble spots) and others, just sitting and waiting —

Many of the pictures use the news photographer’s approach to photo­graphy.

In an interview at the Constitutional Court, where the exhibition is being held, Borrie la Grange, a spokesperson for MSF, described the photographs as “bearing witness”. The aesthetic on show was a simple one, that of the witness, the one who had seen it all and had a story to tell.

Raw and unprocessed, the photographs don’t show a pursuit of an aesthetic of beauty. But what they lack in beauty is compensated for by their immediacy and unrehearsed insistence on the now — a rough present.

And the now seems to be the same, even though one goes across borders. Be it in Zimbabwe (some of the photographs were taken in 2008, the lowest point of the crisis, when the country was in the grip of a cholera epidemic), the DRC, Somalia or South Sudan, the pictures are disturbing and insistent.

Yet what is also apparent is life, hope and love, for instance in the black-and-white image of a mother cuddling a child. Despite everything else, life continues, almost miraculously, as in the picture of a heavily pregnant woman receiving medical attention.

But it is the photographs about and of Somalia that tell a devastating tale of decay and destruction. Somehow Somalis seem to live in crevices opened up as much by natural erosion as by the Kalashnikov.

Percussive and cynical
On Thursday poet Lesego Rampolokeng, jazz musician and pedagogue Zim Ngqawana and veteran poet Keorapetse Kgositsile performed at the opening of the exhibition. The choice of the three artists is interesting. Rampolokeng’s take on the post colony is percussive and cynical, Ngqawana has done compositions that deal with migration (Migrant Worker in His Homeland, Migrant Worker on the Train and Migrant Worker in Johannesburg) and the elder statesman of South African poetry, Kgositsile, was in exile for decades.

In an interview with the Mail & Guardian, Rampolokeng bemoaned xenophobia and the killing that went with it, something he called a “twisted idea of what constitutes patriotism” and a defence of “borders created by imperialism. It’s treason, a betrayal of all we have fought for.”

He could have added that it’s a betrayal of ubuntu, perhaps the most distinguished word in South Africa’s lexicon.

While we were talking, La Grange noted that “distance makes it easy to rationalise our disengagement from the continent”.

The photographs are forceful and in your face — it is difficult to be indiff­erent.

Solidarity for Survival is in the Rampart Rooms, Constitution Hill, 1 Kotze Street, Braamfontein, until April 14. Visit www.solidarity4survival.org for more

The taxi industry is the backbone of South Africa’s public transport system. But its drivers, at the mercy of their bosses and government, are struggling to survive the new Covid-19 rules
Read more
Advertising
Continue to the category
Africa