Swaziland’s jackboot beaten by the bra 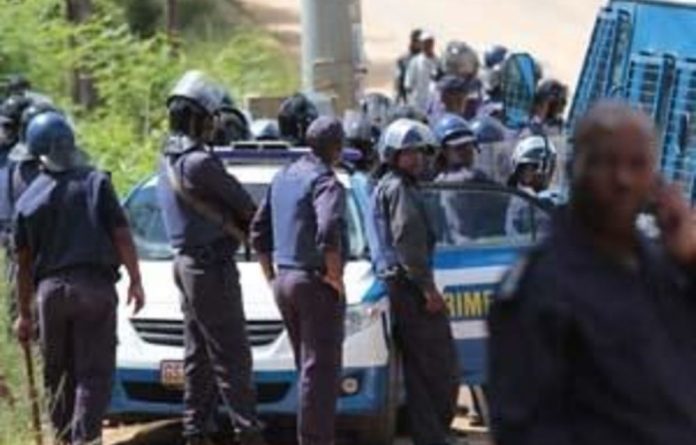 The reports from Swaziland that you are reading and the images on these pages come courtesy of Mail & Guardian photographer Lisa Skinner’s bra.

This proved to be the safest place for us to hide information — my notes and her flash cards of digital photographs — recorded during this week’s pro-democracy protests in Swaziland.

They were hidden there whenever we neared one of the many 24-hour roadblocks that dotted Swaziland’s main roads as the police and army sought to apprehend trade unionists and activists attempting to mobilise.

Immediately after Skinner had taken photographs of the heavy security presence in Manzini, or furtively shot scenes of security force brutality, her card was hidden away. Likewise, when activists’ names, phone numbers or thoughts about the Swazi government were jotted down, they were hidden there.

Swaziland was under lockdown. The ordinary liberties allowing journalists to work and people to associate freely, taken for granted in South Africa, simply did not exist. This was palpable on Monday night as we passed through four police roadblocks between the Golela border post and Malkerns, about 15km outside Manzini.

It was worse early on Tuesday morning, the first day of the planned protest. Sitting outside the Bhunu Mall in Manzini’s business district we were speaking to Lucky, who was dressed in red, wore a National Union of Mineworkers of South Africa cap and was carrying a vuvuzela. Suddenly we were aware that four plainclothes policemen had sidled up to us and began speaking to Lucky in siSwati.

Skinner, Lucky and I were escorted to the Manzini police station, where trade unionists, crammed into police trucks, were being off-loaded. They were made to take off their union T-shirts and caps, slapped and called izinja (dogs).

‘We don’t need bad publicity’
I was interrogated by eight police officers who went through my notebooks and made copies of a contact list of Swazi union officials. They asked me about the people I had interviewed from the banned People’s United Democratic Movement, the Swaziland Solidarity Network and trade unions.

I protested, but a burly policeman said: “In Swaziland, we can do as we want with journalists. If we want to read your notes, we can; if we want to look at your camera and confiscate your photographs, we can. This is Swaziland, not South Africa, my friend.”

After about two hours we were made to sign a statement about what we were doing in Swaziland — we said we were covering a music festival — and released with the words: “You are free to move around but you cannot report on the uprising. If we see you doing so, you will be arrested and deported. It’s best you leave Manzini because we don’t need bad publicity.”

Several foreign journalists were detained and questioned during the week; some were reportedly deported.

Things were much tougher for the locals — they were harassed in the streets for wearing red, and sometimes beaten by groups of policemen and army warders armed with truncheons. Roadblocks and searches were a daily occurrence. The Times of Swaziland reported on Monday that Mphumelelo Maziya was shot for attempting to bypass a roadblock.

People on the streets talked in undertones, unsure of who might be standing next to them.
On Wednesday afternoon Skinner was sneaking long-lens photographs of the police lobbing tear-gas canisters into the compound of the Swaziland National Association of Teachers (Snat). A bystander whispered to us that a person sidling up to us was from the intelligence branch. We moved to another vantage point.

Nothing new
Someone walking past our car while we were interviewing activists on a quiet suburban road in Manzini on Tuesday afternoon informed the police, who arrived soon after. After failing to find incriminating evidence, they let us go, but continued to tail us as we drove two unionists to a bus terminus.

Swaziland’s activists appear wearily resigned to the repression, which, during a march on Tuesday afternoon, included being beaten, fired on with water cannons and dispersed with tear gas.

Justice Dlamini, a Snat organiser, spoke matter of factly about being arrested during the protest on Tuesday, being driven around for two hours with two other activists cramped under the tarpaulin cover of a bakkie, beaten and then dumped in a forest outside Manzini. The Swaziland Democracy Campaign’s Mary da Silva was similarly deadpan as she described being beaten by police while giving an interview to a South African radio station.

Union leaders who spoke to the M&G early on Tuesday morning were arrested soon afterwards and were out of contact for up to 48 hours, the maximum period of detention without charge. They would reappear to talk calmly about their interrogation.

The jackboot was firmly on Swaziland’s throat this week. Indeed, it has been for the past 34 years.

After issuing a statement on Tuesday, MTN’s South African head office would not answer further questions. “MTN remains politically impartial in all of its operations, including Swaziland, and does not subscribe to any political party, movement or affiliation,” the statement said. “Our operations in Swaziland are running smoothly. However, due to increased volumes on the mobile network, which runs on the 2G spectrum, MTN Swaziland has been experiencing data speeds that are below normal. Our network technicians are doing everything they can to manage the volumes.”

The Swazi government is understood to own 41% of MTN’s Swazi subsidiary and King Mswati a further 10%.

Facebook and mobile communication played a part in the mobilisation and organisation of the three-day protests, which the government banned.

Lucky Lukhele, spokesperson for the Swaziland Solidarity Network, claimed on Wednesday that “all calls to leaders of the protests are being monitored and phone calls are being cut off abruptly”.

“MTN Swaziland is intercepting phone calls and SMSes. The company has workers who are part of the mass movement, who are giving us this information from the inside,” he said.

Another activist, who asked not to be named, said: “On Monday night my phone was working and on Tuesday morning it wasn’t. Access to the internet through MTN [Swaziland] has been patchy.”

Lukhele said the solidarity network would meet Cosatu on the issue and call on South Africans with contracts with MTN to cancel them.