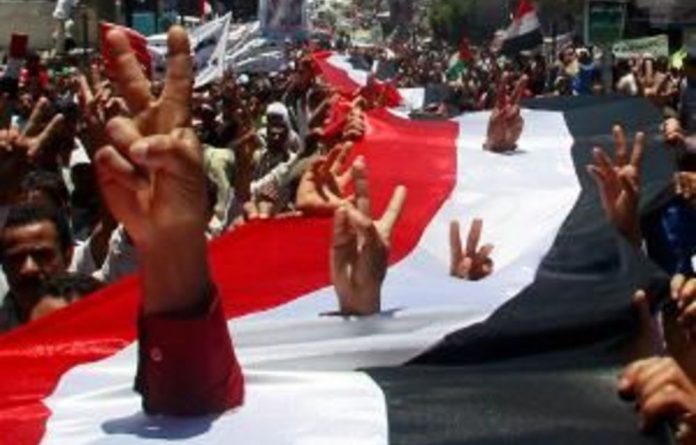 Members of Yemen’s ruling party, including three former ministers, formed a new bloc on Monday to support protests against the rule of President Ali Abdullah Saleh.

The protests, inspired by uprisings that toppled the leaders of Egypt and Tunisia, are now in their third month and bring tens of thousands of people onto the streets almost every day, demanding an end to endemic poverty and corruption. Scores of protesters have been killed.

At least 88 people were wounded on Monday in the Red Sea port of Hudaida as plainclothes police fired bullets and teargas at protesters, who responded by hurling stones, witnesses and doctors said.

After years of backing Saleh as a bulwark against regional instability and the activities of al-Qaeda’s active Yemeni branch, Saudi Arabia and the United States are now pressing him to negotiate with the opposition on handing over power.

The new party, called the Justice and Development Bloc, opposes the suppression of protests and is demanding an end to Saleh’s 32-year rule, its leader Mohammed Abu Lahoum said.

The new party includes former ministers for tourism, human rights and transport from the ruling party, and a number of members of parliament, who joined a stream of former officials who have already deserted Saleh.

“We support the youthful revolution and we are with it,” Lahoum said. “The issue is not the split from the ruling party but the difference in views.”

The states of the Gulf Cooperation Council (GCC), including Saudi Arabia, have offered to mediate between the opposition and the government. But the Yemeni opposition rejects such talks without guarantees that Saleh will relinquish power.

No breakthrough was reached at a meeting between opposition leaders and GCC foreign ministers in Saudi Arabia on Sunday night.

A ruling party official told Reuters a high-level delegation from the party would head to Abu Dhabi, the capital of the United Arab Emirates, for a meeting there on Tuesday.

In Hudaida, residents said plainclothes police armed with clubs, pistols and stones had attacked thousands of protesters who had marched into the streets outside the square where they have been camping for weeks calling for Saleh to go.

“We’re appealing for help in medical supplies as we’re really suffering from a severe shortage … the medical situation is really bad,” said protester Abdul Jabar Zayed. “We have some friends missing and we think they were arrested, we are still making calculations but no specific number yet.”

In a first round of clashes hurt 15 people, two were shot and the others were beaten or hit with stones, doctors said, and protesters began to withdraw back to their camp.

Clashes erupted again as riot police fired shots and tear gas at a group of protesters, witnesses said. Protesters responded by marching out of their camp again, this time headed for Hudaida’s main thoroughfare, residents said.

Five people were shot and 68 were beaten or suffering from teargas inhalation, they said. Zayed said protesters had built a roadblock to try to prevent police getting closer to the demonstrations. (Writing by