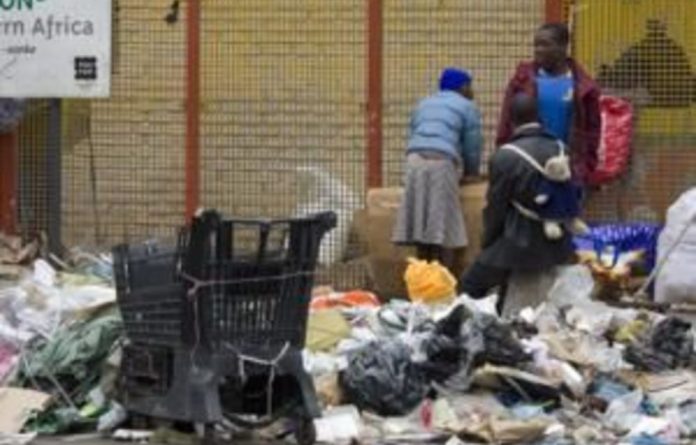 Uncollected rubbish littering the streets of Johannesburg city centre has triggered a rat infestation that poses health risks in the area and a decline in business, the Citizen reported on Tuesday.

Certain spots popular with hawkers, such as Park Station in Plein Street and the Noord Street taxi rank, have been affected the most.

The infestation comes amid an ongoing strike by Pikitup workers after the Johannesburg Labour Court on Monday ordered the City of Johannesburg and the South African Municipal Workers’ Union (Samwu) to return to negotiations.

Getrude Makondo, who trades on Noord Street, said the number of rats tripled since the strike began.

“There’s more rats than usual. And they are becoming bigger.

“They are not scared of people, they look straight at you and some even have beards,” she said.

Another trader in the area, Sibusiso Nyani, said business had slowed down due to the rubbish stink and rats.

“People don’t want to buy from us anymore. They walk past with their noses closed because they are trying to get away from the smell … and when they see the rats they run away,” Nyani said.

Lucas Kunene, a retired manager of environmental health in Johannesburg, said the rat infestation posed a great risk which could “explode” if not brought under control.

He said: “Jo’burg does not have a strategic plan to control rat infestation and that is unacceptable.”

“Rats can spread over 35 diseases. If an infected rat comes into direct contact with a human — through urine or droppings — it can spread diseases such as salmonellosis and even lassa fever,” Kunene said.

Residents rubbish strike
Employees of rubbish removal company Pikitup have been on strike since April 7, and hopes of the strike ending on Monday were dashed in the Labour Court when Judge Annali Basson ruled that the strike was protected following an application by the city to have the strike declared unprotected.

Pikitup employees refuse to go back to work until the City of Johannesburg signs an agreement to investigate allegations of corruption and irregularities against the company’s management. Among their demands, the employees — represented by the Samwu — want casual workers to be made permanent and wage inequalities to be addressed.

Several Pikitup board members, including board chair Phumla Radebe and the company’s managing director Zami Nkosi, have resigned since the strike started.

For some neighbourhoods it has become a nightmare to get rid of refuse, while others that can afford the extra costs have made alternative plans.

“We got very desperate after the refuse started piling up and we began looking for private companies. We settled for a company called All Waste,” Linus Muller, head of communication for the Blairgowrie Community Association, told the Mail & Guardian on Monday.

However, Muller said even with the help of a private company, the situation is still “exceptionally bad”, and that not everyone is prepared to “pay out of their own pocket for [private] refuse removal, and pay Pikitup at the end of the month”.