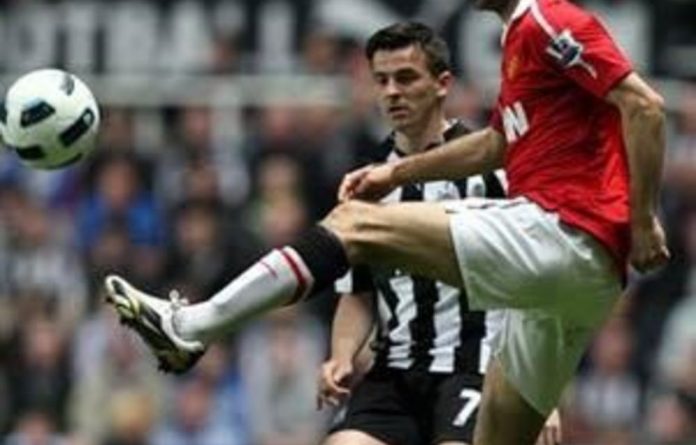 Manchester United’s Premier League title charge was slowed by Newcastle on Tuesday, the leaders being held to a 0-0 draw to end a run of three consecutive wins.

The point took Man United seven points clear of Arsenal before the second-place London club plays at Tottenham on Wednesday.

United was denied a penalty kick in stoppage when Javier Hernandez was instead booked for diving after being challenged by Newcastle defender Danny Simpson.

“I didn’t feel like I touched him,” Simpson said. “I feel like he went down too soft.”

“It was a clear penalty. It’s an insult because he’s booked him,” Ferguson said. “I thought the referee had a good game tonight, but he’s let himself down by booking the player.

“If it’s not a penalty, fine. But to book him is an insult. There is definitely contact, no doubt about that.”

Ferguson claimed not to see Newcastle’s earlier penalty claim, in which Peter Lovenkrands felt he was tripped by United midfielder Anderson.

United has five matches left in pursuit of a record 19th English league title, but the draw has raised spirits at Arsenal before the north London derby.

In the first half at Newcastle, Krul denied Hernandez and Wayne Rooney, who returned after a two-match suspension for swearing into a TV camera during a goal celebration against West Ham.

With around 20 minutes to go, United winger Ryan Giggs curled the ball wide with the goal at his mercy after being picked out by Patrice Evra.

The draw took Newcastle up to ninth place, reaching the 40-point mark that is usually enough to be safe from relegation in the team’s first season back in the Premier League.

“I think we owe it to ourselves and to the rest of the league that we put in a full performance [at Blackpool] on Saturday,” Pardew said. “I think with the commitment we’ve shown tonight, the points we’ve got, the goals we’ve got, we’re pretty much safe. But we want to finish high and put in the same commitment and effort as we have tonight against the probable champions.” — AP