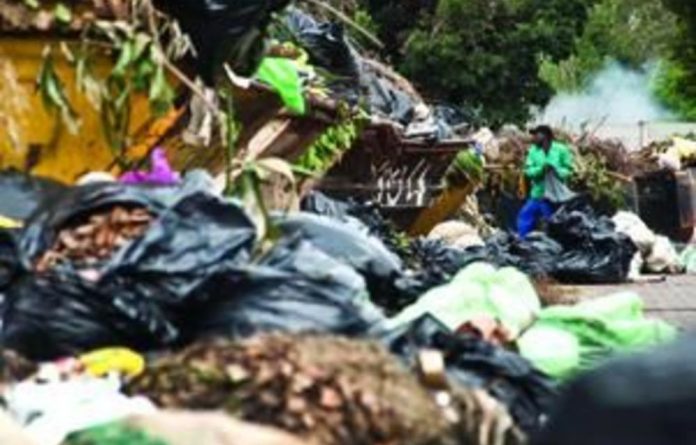 As uncollected rubbish piles up in Johannesburg’s streets and residents fear a rat plague, the striking South African Municipal Workers’ Union (Samwu) has reported 13 companies to the Hawks for allegedly receiving irregular tenders worth hundreds of millions of rands from waste company Pikitup.

Samwu is keeping the details of alleged irregularities close to its chest, possibly as a bargaining chip in its dispute with the company.

However, the Mail & Guardian has established that tenders involving four companies, worth a combined R150-million, are included in the documentation handed over to the Hawks.

The documents, some of which the M&G has seen, include motivations made by Pikitup to the tender adjudication committee. In some cases, these argue against an open tender process in which other companies could bid.

“Money must stop being wasted on contract workers. Temporary contracts must be changed to permanent employment,” the union said in a statement this week.

Last week the entire Pikitup board resigned, with Samwu Gauteng organiser Menzi Luthuli alleging that the resignations could signify “they have something to hide”.

City of Johannesburg spokesperson Gabu Tugwana said the reasons the board members fell on their swords were “confidential” and had first to be tabled at the mayoral committee for discussion.

Although the committee met last week, further attempts by the M&G to establish the reasons for the mass resignations were futile.

Pikitup spokesperson Pansy Jali said she viewed the allegations in a serious light and the company would be instituting an investigation.

The four companies included in the 13 under investigation provide a snapshot of the alleged rot at Pikitup. The documents show that:

Luthuli confirmed that “documents showing tender corruption with the different companies are now with the Hawks and Special Investigations Unit”.

The union’s Johannesburg branch chairperson, Esaw Mbele, said an anti-corruption task team was set up last year and had a meeting scheduled for Tuesday last week. He said Pikitup’s representatives did not show up although the unionists attended.

Luthuli said Pikitup was mistaken if it thought that the investigation into tender corruption was over because of the resignations.

But Tugwana said “the corruption allegations by Samwu have not been substantiated”.

He added: “Even without this [substantiation], the city has already commenced a process of investigating the circumstances around some of the tenders that have been in the media in the recent past.

“The findings on these will lay the basis for further investigations, should this be warranted.

“Furthermore, a reputable firm of lawyers was appointed last Friday to commence with the investigations.”

Meanwhile, acting Pikitup managing director Lawrence Boya said this week in a radio interview that he was concerned about a possible health catastrophe in the city if the strike continues.

Boya told Talk Radio 702 that the strike had been prolonged by the union’s insistence that 3 000 contract workers be reabsorbed by Pikitup as permanent workers.

Although Boya said rehiring contract workers on a permanent basis would be only “a small additional expense”, he explained that “if you made a sweeping policy on the issue, it would affect all sorts of other contract workers. You have to define what this new category of permanent workers is.

“We could have strikes left, right and centre,” he said. “That’s why we haven’t agreed on a broad sweep [of making workers permanent employees]”.

The timing of the strike by Johannesburg’s refuse removers — the run-up to elections — led the ANC to conclude that the action was “orchestrated to sabotage the ANC campaign”, Dumisa Ntuli, the ANC’s Gauteng spokesperson, said this week.

Ntuli also expressed concern about the union’s conduct, saying the trashing of streets, destruction of property and attacking of non-striking workers violated the ANC’s Polokwane conference resolution on defending the democratic state.

He said the ANC had raised concerns about Samwu’s behaviour with the union and the tripartite alliance. “The ANC will not take away [Samwu’s] constitutional right to strike, but it has to bargain responsibly,” Ntuli said.

The strike follows an outcry by ratepayers about deficiencies in the municipal billing system introduced by the ANC-controlled metro council.

Samwu denied sabotaging the ANC’s campaign, saying “all issues that our members are on strike about were on the table” before the elections were in prospect.

“We had exhausted all options available to us and had been waiting for management, the City of Johannesburg and the ANC to intervene since 2009,” Samwu said.

“Corruption and nepotism had engulfed the entire entity [Pikitup] and was threatening to cripple it. We urge the ANC to ensure that we engage in alliance structures as agreed and refrain from publicly attacking one another, as this will not help in any of our pursuits.” — Glenda Daniels & Lionel Faull