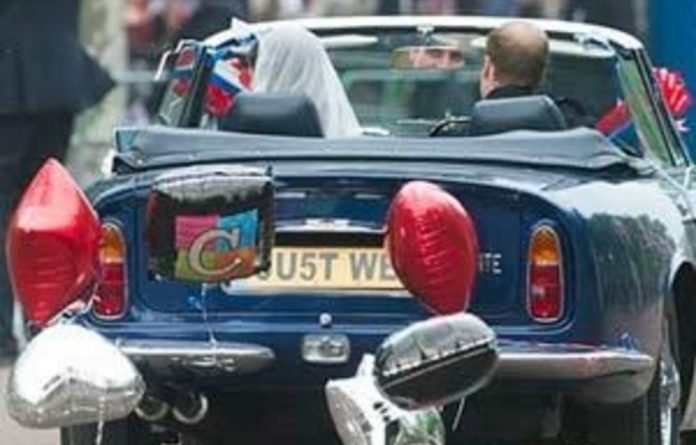 Prince William delighted crowds of stunned well-wishers in central London on Friday when he took his new bride Kate for a spin in an Aston Martin with the number plate JU5T WED on the back.

The prince drove out from the Buckingham Palace gates to the surprise of many, in a light-hearted moment that captured the spirit of their wedding day and epitomised their popular appeal as a new generation of royals.

The new Duke and Duchess of Cambridge, aged 28 and 29, drove to nearby Clarence House, the home of his father Prince Charles, in an open-top Volante DB6 covered in bunting and balloons.

Celebration of a royal wedding

Britain’s Prince William married Kate Middleton in a magnificent ceremony on April 29. Billions of people around the world tuned in to watch the two tie the knot. Relive the day with our slideshow.

Kate was still in her ivory wedding dress, while William, second in line to the throne, had changed from his red Irish Guards colonel uniform into a less formal black outfit.

“It was Prince William’s idea to drive his new bride away from the official reception on their first journey as a married couple to his family home,” said a spokesperson for his St James’s Palace office.

The couple waved to the shocked crowds as William slowly drove up The Mall, the ceremonial processional route from Buckingham Palace to Trafalgar Square.

In complete contrast with the formal carriage procession that took them from their Westminster Abbey wedding venue to the palace, escorted by massed ranks of cavalry, this time the couple were followed by a sole security car.

With a helicopter hovering overhead, the Aston Martin, the dashing British hero, the beautiful girl, and the boldness of the move, it could have been a scene from a James Bond movie.

The car had been decorated with helium balloons, red and white rosettes, red, white and blue ribbons tied between the bonnet and the windscreen, with a learner driver’s L plate on the front.

And in a move kept as a special surprise for the couple, there was a fly-past by a Royal Air Force search and rescue Sea King — the same helicopters that William flies.

The couple are based on the rural island Anglesey off the northwest coast of Wales, where William is a search and rescue pilot.

Clarence House staff came out to take photographs of the couple as they arrived.

The laid-back move chimed with William’s impromptu appearance on Thursday night, when he emerged from Clarence House with Harry to greet people who were camping out overnight on The Mall for a good view of the procession.

The convertible Aston Martin Volante DB6 MKII in Seychelles blue belongs to William’s father Prince Charles, who has owned it since 1969.

The environmentally-aware Charles had it converted in 2008 to run on E85 bioethanol, made from English wine wastage. — AFP