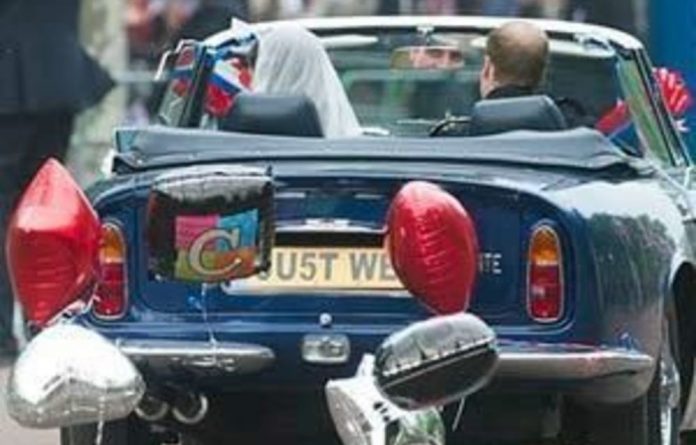 Following a spectacular royal wedding that dazzled the world, Prince William will go back to work as a search-and-rescue pilot next week before taking his new wife on honeymoon abroad.

The new Duke and Duchess of Cambridge, looking fresh after partying into the early hours in the wake of Friday’s wedding, boarded a helicopter in the Buckingham Palace gardens on Saturday for a weekend break at a secret location in Britain.

The prince will resume his job as a search and rescue pilot next week before the honeymoon starts at an undisclosed date, the royal family said in a statement.

“The Duke and Duchess of Cambridge have chosen not to depart for a honeymoon immediately,” it said, using the new titles bestowed on Prince William (28) and the former Kate Middleton (29) by Queen Elizabeth.

“The locations of both their private weekend before the Duke returns to work and their future honeymoon, which will be overseas, will not be disclosed in advance,” it said, pointedly ignoring feverish speculation as to where the couple will go.

After a relationship of almost a decade, they married in London’s towering 13th-century Westminster Abbey on Friday as a million cheering supporters lined the capital’s streets.

Worldwide, estimates put the global television and online audience at 2,4-billion people — more than one in three of the global population if the figure is accurate.

Commentators praised the royal family for striking a balance between choreographed pomp — military bands in black bearskin hats and household cavalrymen in shining breastplates — and personal spontaneity at the wedding.

“The British still know how to combine pageantry, solemnity, romance [and wild hats] better than anyone else in the world,” wrote Sarah Lyall in the New York Times.

William drove his bride the short journey from Buckingham Palace to St James’s Palace in his father’s open-top Aston Martin with the licence plate “JU5T WED”.

Photographs of their kisses on the balcony of Buckingham Palace carpeted newspaper front pages.

The day ended with a late-night party for the couple’s friends and family, for which Kate changed into a strapless off-white dress and a cropped knitted cardigan while William donned a black dinner jacket and bow tie.

British media quoted one guest, Millie Pilkington, as saying the speeches at the bash were “absolutely hysterical”.

Newspapers were also awash with pictures of Middleton’s sister and maid of honour Pippa in a slinky dress which drew a chorus of approval. “Is Pippa the most eligible woman in the world?” asked the Daily Telegraph.

Honeymoon mystery
Like other details of the wedding, including the designer of Middleton’s dress, the honeymoon venue was a secret.

Suggestions have included the Seychelles, Kenya, the Caribbean island of Mustique, an island on Australia’s Great Barrier Reef, the Greek island of Corfu and the Scilly Isles off England’s south-west coast.

The intense speculation over the couple’s every move underlines the pressure they will face as the future British king and queen living in the full glare of the media spotlight.

Uncomfortable parallels have been drawn between Middleton and William’s hugely popular mother Princess Diana, who was hounded by paparazzi right up to her death in a Paris car crash in 1997 aged 36.

Her death, and divorce from heir to the throne Prince Charles the year before, marked a low point for the royal family, which has also been embroiled in scandal and is seen by many as being out of touch with the British public, particularly during austere economic times.

But Middleton’s background — she is the first commoner to marry a prince close to the British throne in over 350 years — and William’s personable style have helped reverse the monarchy’s rating in recent opinion polls, at least for now.

Not that the wedding was universally acclaimed in a country where many people face harder times, including unemployment and cuts in social services, due to a government austerity programme meant to cut Britain’s huge budget deficit.

“The royal family have too many rights in a country where other people are having their state rights withdrawn. We are funding a wedding of two people I’ve never met and I don’t care about at all,” said London charity worker Jessamy Barker (29).

Middleton has been given the title Her Royal Highness, The Duchess of Cambridge, after the queen made her grandson William the Duke of Cambridge to mark the marriage. – Reuters