Zuma: ‘Only way to sort out problems is to vote ANC’ 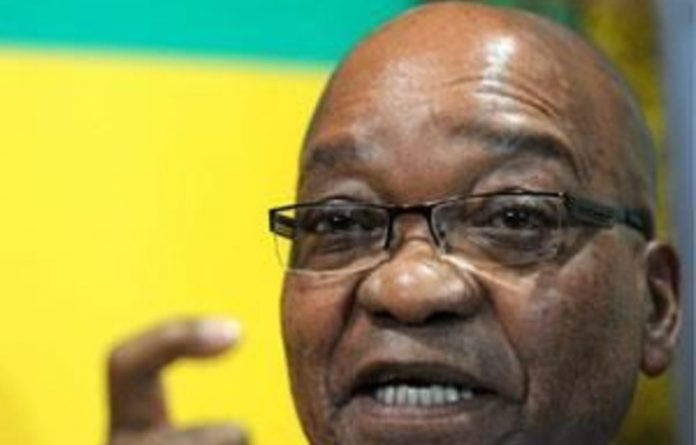 The only way to solve the problems of housing and poverty in Cape Town is to vote for the ANC, party president Jacob Zuma told a crowd in Gugulethu on Saturday.

This was the central message at each of the stops he made in Gugulethu during his campaign ahead of the May 18 local government elections.

Addressing hundreds of people, Zuma said the Democratic Alliance (DA) was not doing a good job in the city or in the Western Cape.

“There is a myth that the municipalities of the Western Cape are the most excellent … that it’s performing … In fact it’s the worst run municipality.

“The DA is only looking after the rich people. There are lots of problems, but we can’t solve them because you are under the wrong municipality. We can sort out the problems only if you vote for the ANC. Let’s vote and after that sort out all the problems.”

Zuma said he had been very disappointed at what he had seen in Cape Town.

He described the situation as “very bad”.

He said the only way people living in Gugulethu, Khayelitsha and Mitchells Plain could live better lives was if they voted for the ANC.

One little girl at the Kick Hostel Zuma visited on Saturday morning carried a poster saying: “We want solutions, no more explanations”.

Zuma told the crowd gathered in the narrow, muddy street in front of a row of shacks, that while he was aware of their problems, the ANC could not do anything because the city was under the wrong leadership.

He said while the policy of the ANC was to change the lives of the people, it could not be done in Cape Town unless the ANC was in power.

He called for the liberation of the Western Cape, describing it as an “extremely apartheid system” that encouraged “separate development”.

He encouraged people to become volunteers and to spread the word for everyone to vote for the ANC in order to liberate the metro.

To loud cheers and applause from a hall at the Zolani centre, he said: “It;s [the ANC] not like every other political party. We were formed by the nation for the nation, to liberate people, to change their lives … On the 18th of May, vote for the ANC.”

He described the the election as “do or die” for the party in the Western Cape.

Fransman and Ehrenreich encouraged people to vote the ANC back into power.

“We [ANC] are coming back and taking Cape Town back to the ANC. We know what our forefathers had promised our people,” said Ehrenreich.

Fransman said the ANC in the Western Cape had a plan and had given notice to the DA.

Zuma was expected to address the Congress of South African Trade Unions May Day rally in Athlone on Sunday.

Bloemfontein visit
On Thursday, Zuma told unhappy ANC members during an election drive in Bloemfontein to vote for the ANC and that problems with the candidate’s list would be sorted out later.

Zuma was visiting the Khayelitsha informal settlement near Grasslands, in Bloemfontein, when local residents handed him a memorandum listing their grievances.

Speakers were given an opportunity to air their problems over the loudspeakers of the ANC’s election truck before Zuma spoke.

Zuma told the cheering crowd, mostly in isiZulu, that the ANC would investigate their unhappiness with the election candidate lists and would come back to them after the elections. – Sapa