US says Bin Laden was unarmed 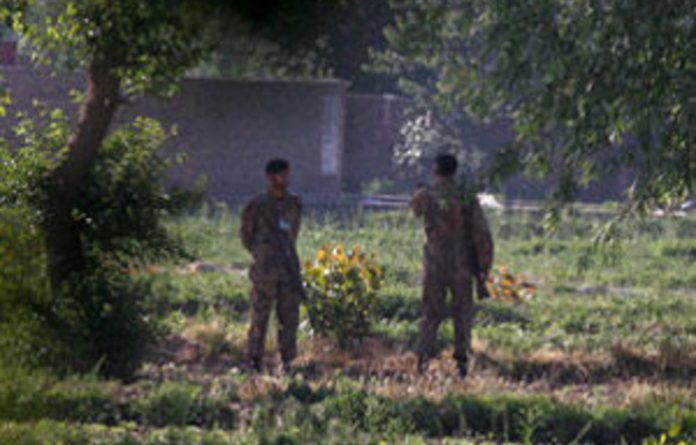 Osama bin Laden was unarmed when US special forces shot him dead, the White House said, as it vowed to “get to the bottom” of whether Pakistan helped the al-Qaeda leader elude a 10-year manhunt.

Al-Qaeda leader Osama bin Laden has been killed in a firefight with US forces in Pakistan ending a nearly 10-year worldwide hunt for the mastermind of the September 11 attacks. Watch our slideshow.

Pakistan faced growing pressure on Wednesday to explain how the world’s most-wanted man was able to live for years in the military garrison town of Abbottabad, just north of Islamabad. Pakistan has denied it gave shelter to Bin Laden.

The revelation that Bin Laden was unarmed appeared to contradict an earlier account from a US security official that the al-Qaeda leader “participated” in a firefight with the helicopter-borne American commandos.

White House spokesperson Jay Carney on Tuesday cited the “fog of war” — a phrase suggested by a reporter — as a reason for the initial misinformation.

If this becomes controversial, it could complicate US efforts to mend ties with the Muslim world in the wake of the wars in Afghanistan and Iraq, conflicts sparked by the September 11 2001 attacks that Bin Laden orchestrated.

US officials were also wrestling with whether to release graphic photographs of Bin Laden’s body — he was shot in the head — which could provide proof of his death but risks offending Muslims.

Pakistan has welcomed Bin Laden’s death, but its foreign ministry expressed “deep concerns” about the raid, which it called an “unauthorised unilateral action”.

The CIA said it kept Pakistan out of the loop because it feared Bin Laden would be tipped off, highlighting the depth of mistrust between the two supposed allies.

US helicopters carrying the commandos used radar “blind spots” in the hilly terrain along the Afghan border to enter Pakistani airspace undetected in the early hours of Monday.

Carney insisted Bin Laden resisted during the raid — although he would not say how — when US forces stormed his compound.

“There was concern that Bin Laden would oppose the capture operation and, indeed, he resisted,” Carney said. “A woman … Bin Laden’s wife, rushed the US assaulter and was shot in the leg but not killed. Bin Laden was then shot and killed. He was not armed.”

The US security official had told Reuters on Monday the raid was a “kill operation”, although he added Bin Laden would have been taken alive if he had surrendered.

US officials have also backtracked on an earlier statement that Bin Laden’s wife had been used as a human shield.

Panetta said in an interview with PBS television that the strike team opened fire in response to “threatening moves” as they reached the third-floor room where they found Bin Laden in his sprawling compound.

“The authority here was to kill Bin Laden,” he said. “And obviously, under the rules of engagement, if he had in fact thrown up his hands, surrendered and didn’t appear to be representing any kind of threat, then they were to capture him. But they had full authority to kill him.”

Unlawful killing?
While many world leaders applauded the US operation that killed Bin Laden, there were concerns in parts of Europe that the United States was wrong to act as policeman, judge and executioner.

US Attorney General Eric Holder defended the action as lawful on Tuesday, but some in Europe said Bin Laden should have been captured and put on trial.

“It was quite clearly a violation of international law,” former West German chancellor Helmut Schmidt told German TV. “The operation could also have incalculable consequences in the Arab world in light of all the unrest.”

Geoffrey Robertson, a prominent London-based human rights lawyer, said the killing “may well have been a cold-blooded assassination” that risked making bin Laden a martyr.

“It’s not justice. It’s a perversion of the term. Justice means taking someone to court, finding them guilty upon evidence and sentencing them,” the Australian-born Robertson told Australian Broadcasting Corp television.

Pakistan has come under intense international scrutiny since Bin Laden’s death, with questions on whether its security agencies were too incompetent to catch him or knew all along where he was hiding, and even whether they were complicit.

The compound where bin Laden has been hiding — possibly for as long as five or six years — was close to Pakistan’s military academy in Abbottabad, about 65km from Islamabad.

“It would be premature to rule out the possibility that there were some individuals inside of Pakistan, including within the official Pakistani establishment, who might have been aware of this,” White House counterterrorism chief John Brennan told National Public Radio.

“We’re not accusing anybody at this point, but we want to make sure we get to the bottom of this.”

CIA director Panetta, in an unusually blunt interview with Time magazine, explained why Islamabad was not informed of the raid until all the helicopters carrying the US Navy Seals — and Bin Laden’s body — were out of Pakistani airspace.

“It was decided that any effort to work with the Pakistanis could jeopardise the mission: they might alert the targets,” Panetta said.

Pakistani President Asif Ali Zardari, in the first substantive public comment by any Pakistani leader, defended his government, which receives billions of dollars in aid from the United States.

“Some in the US press have suggested that Pakistan lacked vitality in its pursuit of terrorism, or worse yet that we were disingenuous and actually protected the terrorists we claimed to be pursuing,” Zardari wrote in the Washington Post. “Such baseless speculation … doesn’t reflect fact.”

Later Pakistan’s foreign ministry said its Inter Services Intelligence (ISI) spy agency had been sharing information about the compound with the CIA and other friendly intelligence agencies since 2009 and had continued to do so until mid-April.

“It is important to highlight that taking advantage of much superior and technological assets, CIA exploited the intelligence leads given by us to identify and reach Osama bin Laden,” the ministry said in a lengthy statement.

Ratings boost
US President Barack Obama has enjoyed a popularity boost from the killing of the architect of the September 11 attacks on New York and Washington.

About four in 10 Americans say their opinion of Obama improved after he ordered the raid. But the bump in his ratings could be short-lived as voters focus again on domestic concerns crucial to his 2012 re-election prospects.

Obama may face more pressure to speed up the planned withdrawal this July of some US forces from the unpopular war in Afghanistan.

The killing of Bin Laden could also aid a political settlement by making it easier for the Afghan Taliban to sever their ties with al-Qaeda.

“I do think that this opens the door to push for a political settlement; that depends, however, on President Obama choosing to take the opportunity,” said Joshua Foust at the American Security Project in Washington.

The first Taliban response, however, has been to challenge the truth of Bin Laden’s death, saying Washington had not provided “acceptable evidence to back up their claim” that he had been killed.

No photos or video of Bin Laden’s body or swift burial at sea have been released.

Panetta said there was never any doubt that ultimately a photograph would be made public, but other officials said no final decision had been taken, reflecting an intense internal debate in Washington “I’ll be candid. There are sensitivities here in terms of the appropriateness of releasing photographs of Osama bin Laden,” said Carney. – Reuters