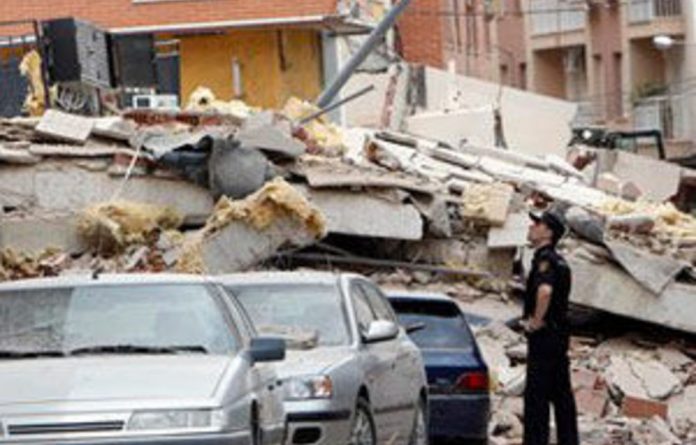 Residents of the Spanish town of Lorca have begun sifting through the rubble left by two earthquakes as the death toll was reduced to eight and questions were asked about how such apparently minor tremors could cause such havoc.

Authorities put the number of injured at 120 and said three people were still in a serious condition. Two pregnant women and a child were among those who died in the two quakes.

Up to 20 000 people spent the night in squares, parks and nearby countryside amid fears of aftershocks.

People slept in tents and cardboard boxes, while hundreds more bedded down on the ground with nothing more than their clothes and blankets.

“Today will be even longer than yesterday,” warned mayor Francisco Jódar, who vowed to get people under cover for Thursday night and proclaimed three days of mourning.

Rescue teams, military personnel and bulldozers moved into the city on Thursday morning to clear away rubble, which included one three-storey building that collapsed across a city street.

At least two of the dead were killed by falling masonry which crashed to the ground from an apartment building in one of the town’s poorer neighbourhoods.

Unlucky
Some of those who began returning to their homes on Thursday morning reported serious damage, raising concerns about the quality of building work in an area known for normally low-level earthquakes.

Engineers, architects and surveyors began the task of checking buildings for structural damage.

Roger Musson, a seismologist at the British Geological Survey, said the town had been unlucky because the quake had happened 3km underground.

“It’s only really caused such damage because it was so shallow and the epicentre was so close to the town of Lorca,” he said.

“A magnitude 5.2 is not that big — it’s not considered a large earthquake.”

Earthquakes normally strike at a depth of between 10km to and 19km, and the shocks are more dispersed.

“On average there are probably about 1 000 magnitude 5 earthquakes every year, which is around three per day,” he said.

“They mostly happen in the sea, or in remote places. It’s only when you get one in a place like this where you get significant damage,” he added. “It’s certainly unlucky for the people of Lorca to get one so close and shallow.”

The town is in an area of Spain were quakes are not uncommon, but where they mostly cause little damage.

This was the deadliest quake in Spain since 1956, when 12 people died and some 70 were injured in the southern Granada region. – guardian.co.uk