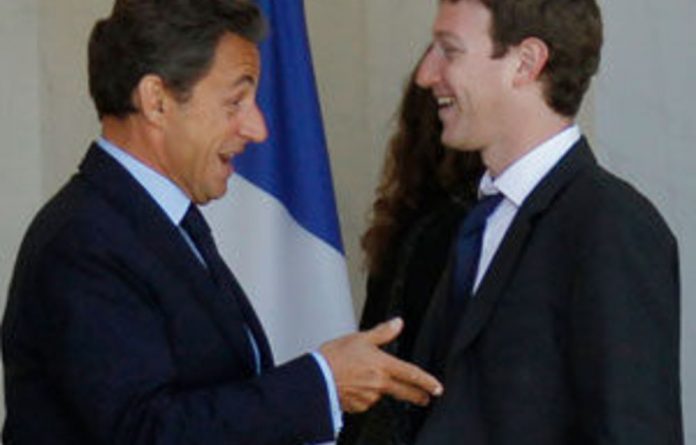 Facebook founder Mark Zuckerberg denied on Wednesday that his global social networking site was to thank for enabling the revolutions in Tunisia and Egypt through protesters coordinating online.

“Facebook was neither necessary nor sufficient for any of those things to happen,” the 27-year-old New Yorker told the “e-G8” gathering of Internet bosses in Paris.

“It would be extremely arrogant for any specific technology company to claim credit” for protest movements in the Arab world such as those that ousted long-term rulers in Tunisia and Egypt this year, he added.

“People are now having the opportunity to communicate” more widely than ever before, he said, adding: “That’s not a Facebook thing. That’s an Internet thing.”

Zuckerberg spoke after meeting French President Nicolas Sarkozy, who called the e-G8 forum to make proposals to G8 leaders on online regulation and freedoms, but which, on its second day, was fast becoming a face-off between the powers that be, big business and web rebels.

The young American founder of the social networking site — on which Sarkozy himself has a page — visited the Elysee palace between the president’s meetings with his cabinet and the visiting Japanese prime minister.

Zuckerberg left the Elysee dressed in a suit and appeared later in jeans and a T-shirt on stage at the e-G8, where he was diplomatic about the meeting with Sarkozy, a day after the president ruffled feathers with his line on Internet regulation.

“It was fun,” the young New Yorker told the gathering. “I understand where he’s coming from. I appreciate the chance to be here and be part of the dialogue.”

Sarkozy kicked off the summit of top online and media barons on Tuesday, hailing their “Internet revolution” but warning them that some degree of government regulation was inevitable to avoid “democratic chaos”.

Top media bosses in their closing session Wednesday debated a draft proposal for the G8 world leaders at their summit this week that governments should provide Internet access to citizens but not regulate online content.

They aimed to agree on final proposals at the end of the summit.

“The world’s most developed economies (the G8) are poised to impose strict copyright enforcement and heavy-handed government regulation of the Internet,” it added, citing leaks of drafts of the e-G8’s final declaration.

The e-G8 aims to draw up a declaration for the Group of Eight Leaders who meet in Deauville, northwestern France, on Thursday and Friday, with discussions covering sensitive issues such as online copyright and censorship.

Major players in the industry and politics approved Sarkozy’s stance on regulation, particularly on protecting intellectual property from online privacy.

Sarkozy “did well in putting these questions in the agenda”, the European Union’s Digital Agenda Commissioner, Neelie Kroes, told the forum on Wednesday.

“Sometimes you need rules in the game, in particular when it’s about global issues.”

Rupert Murdoch, the billionaire head of the News Corp empire and arguably the world’s most powerful media mogul, also weighed in, calling for the G8 to protect intellectual property.

“We hope that the G8 will strongly affirm that the property rights of artists and creators are more than just a matter of protecting cultures,” he told the gathering on Tuesday.

“In this new century, they are essential requirements for a dynamic economy and the digital future.”

Several media rights and civil society groups including Reporters Without Borders held a news conference on Wednesday, complaining that the forum was giving a voice mainly to big businesses.

With blogs and Tweets oiling the wheels of revolution in some countries, and scans and downloads sparking trade disputes in others, the stakes are high for leaders seeking to profit from the web but also to rein in online crime.

Top executives from online giants including Microsoft, Facebook, eBay and Amazon attended the gathering to tout the economic potential of the Internet.

Zuckerberg and other big hitters are due to personally deliver the e-G8’s declaration to G8 leaders in Deauville.