Transforming the wasteland of Evaton West 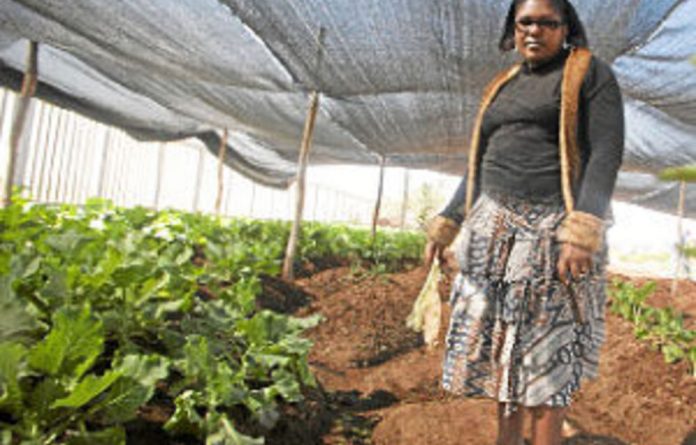 My first meeting with Wendy Tsotetsi took place on the phone. I had heard about her work, but there was no information about her on the internet or in print, so she volunteered to send me a self-written biography, which read like a long list of hopes and achievements.

As I went through her list, I grew more curious. How did a woman with barely a matric (after high school she trained as a paralegal) and very little formal agricultural training (she did a three-month course that included micro-farming and urban agriculture) become an authoritative voice in urban horticulture?

Tsotetsi invited us to travel with her to Evaton West, her operational base, about 50km south of Johannesburg. There are few places as desolate as this township on the edge of the Bloemfontein-bound N1 in the Emfuleni municipality. Trees and tarred roads are rare in these parts.

Developed in 1997, it’s set on rocky terrain and consists mainly of rows of formulaic reconstruction-and-development-programme houses, separated by red, clay-like roads that turn muddy at the slightest hint of rain. A report released in 2006 on the area by the Anti-Privatisation Forum listed unemployment levels at 51.5%, compared with 23.3% for the whole of Gauteng, suggesting that food security and the need for alternative sources of income are crucial.

But with the establishment of the horticultural initiative, Youth Agricultural Ambassadors (YAA), in 2008, some residents have begun the process of transforming their community by literally taking matters into their own hands.

Co-founded by Wendy Tsotetsi, who has lived in this area since 2003, the YAA trains young people to produce organically grown crops that can weather the effects of climate change. It all started when Tsotetsi was looking for a change of scenery after becoming unemployed.

Tsotetsi first met Tshediso Phahlane, YAA’s co-founder, through a pig farmer in the area named Anna Phosa, with whom they were both interested in working. They recruited other young people with an interest in horticulture, identified possible spaces and secured permission from the municipality to set up projects on the land. Initially, the projects were self-funded, but they managed to secure additional resources through the municipality’s extended public-works programme.

The funding allows volunteers, many of whom would otherwise be unemployed, to earn a stipend of about R1 000 a month while learning horticultural skills that will make them self-sufficient. Tsotetsi says that once someone has been a volunteer under a mentor for a year, he or she is helped to start his or her own co-operative and recruit volunteers. So far, the YAA has about 27 gardening projects spread throughout Emfuleni municipality, which is one of three local municipalities comprising the Sedibeng district. So far around 550 volunteers work in gardening teams.

Other projects
The garden at Chief Bhambatha Primary was among the first of the projects in the township’s extension two, which Tsotetsi started three years ago with William Mgidi, who has gone on to head another project within the YAA programme.

When we arrive for a tour of the garden at Chief Bhambatha Primary School, the school’s handyman is escorting a child with a case of diarrhoea home. The boy, about seven years old, is sobbing from the embarrassment of having soiled his pants. Tshidi Pule, a teacher at the school, says the diarrhoea could be HIV-related. Many of the 1 300 pupils come from single-parent families or child-headed households, as a result of high HIV prevalence in this community.

“Because of their medical regimen, a lot of them are also habitual late arrivals as they suffer dizzy spells from taking antiretrovirals,” Pule says. The school facilitates a subsidised feeding scheme, consisting of two meals a day, usually a soft porridge breakfast and a soya mince or beans and samp lunch.

The garden, about the size of an Olympic-size swimming pool, includes rows of spinach, beetroot, onions, cabbage and carrots, arranged in designs replicating the South African flag.

“It’s so that people don’t get bored while tending the garden,” Tsotetsi says. It also has a generous supply of herbs, including parsley, lavender, and mint, from which teas and other homeopathic remedies are packaged and sold by the YAA, supplying crucial cash for the basic meals provided by the school.

The Inkululeko Agricultural Co-operative manages and operates the garden, which benefits the co-operative financially, while donating food to school children. Everybody else has to pay for the food grown here, be they teachers or members of the surrounding community.

“We are in the process of training people at the school to set up a garden that they will run on their own,” Tsotetsi says, expounding on the YAA’s approach of making projects self-sustaining. Around the corner from the school, another parched patch of municipal land has been transformed into a field of plenty. The stones and rocks that once rendered the land unworkable have been turned into landscaping material, punctuating the zany beds with spider web shapes and dice. Shoots peek out to greet the bright sun.

Tsotetsi tells me that about 50 volunteers from the community tend the garden. Most seem to have finished their thrice weekly share of gardening chores and are packing away their tools. Inside the shack a man in a necktie enthusiastically conducts a class on starting and maintaining a business, courtesy of the department of agriculture.

“The president recently said that food security is one of biggest issues facing South Africa,” says Tsotetsi. “On that basis, it’s not hard to motivate people to get involved. They know that because of climate change, food prices will go up.”

Phahlane says Tsotetsi’s great strength is her ability to mobilise people into action. “What makes her a good leader is that she is friendly, listens and is articulate. And she doesn’t procrastinate. It costs about R80 000 to be recognised as a certified organic farmer, but we haven’t let that stop us. We don’t spend on chemicals and we can enhance our seeds after the harvest and cut our carbon footprint by selling close to where we produce.”

Tsotetsi says the YAA would benefit from certification, as it would allow it to label its products more prominently and draw people at supermarkets.

After showing us a few more gardens, Tsotetsi takes us to a wide patch of land in extension four. As we admire the stretch, filled with kitsch landscaping designs and aloe plants of varying sizes, we notice a few pieces of litter peeking from the surface. A man calls out in Sotho from his house across the street to Tsotetsi: “You have worked really hard, thank you. This place used to stink.”

She turns to us, almost embarrassed by the compliment. “Not all the open spaces can be used for food [production]. Some of them have to be used for recreational purposes.” I shudder to think what this place must have looked like just a few years ago.