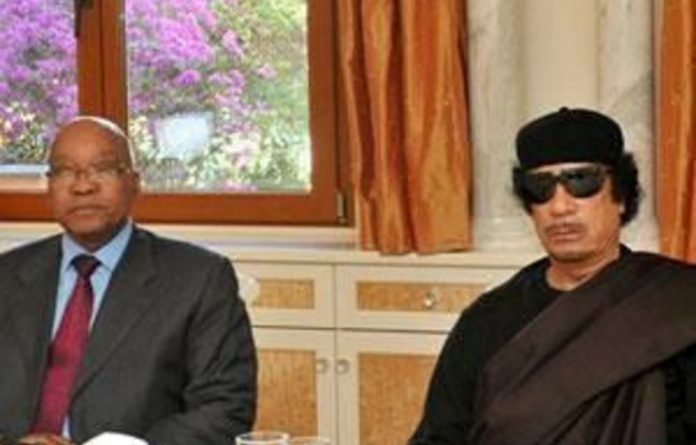 Powerful explosions rocked Tripoli as Nato pressed its air war on Wednesday amid Libyan charges it has killed 718 civilians and reports that former British special forces soldiers are advising the rebels.

Nato allies agreed on Wednesday to extend the campaign in Libya for another 90 days, prolonging the mission until late September, the alliance said.

“Nato and partners have just decided to extend our mission for Libya for another 90 days,” said Nato Secretary General Anders Fogh Rasmussen.

“This decision sends a clear message to the Gaddafi regime: We are determined to continue our operation to protect the people of Libya,” he said in a statement after the North Atlantic Council, the decision-making body of the 28-nation alliance, agreed to extend the mission.

He warned the departure of veteran leader Muammar Gaddafi, as demanded by Nato and the G8, would be a “worst-case scenario” for Libya.

“Since March 19, and up to May 26, there have been 718 martyrs among civilians and 4 067 wounded — 433 of them seriously,” Ibrahim said, citing health ministry figures that cannot be independently verified,

He said these figures do not include Libyan military casualties, a toll the defence ministry refuses to divulge.

Soon after he spoke late on Tuesday, six powerful explosions rocked the centre of Tripoli, the target of more and more intensive air raids by Nato warplanes for more than a week, an Agence France-Presse journalist reported.

It was not possible to determine the targets, the reporter said, adding that planes continued to fly over the Libyan capital.

‘Security valve’
Ibrahim ruled out the embattled strongman stepping down from power.

“If Gaddafi goes, the security valve will disappear,” he said.

“Gaddafi’s departure would be the worst-case scenario for Libya,” he told reporters, and warned of “civil war”.

Ibrahim also denied that South African President Jacob Zuma, who met Gaddafi in Tripoli on Monday, had discussed an “exit strategy” with him.

Zuma “never discussed any exit strategies as they have been described in the media”, the spokesperson said.

Earlier, a statement from the South African Presidency said Gaddafi would not leave Libya despite growing international pressure and intensified Nato strikes on his regime.

“Colonel Gaddafi called for an end to the bombings to enable a Libyan dialogue. He emphasised that he was not prepared to leave his country, despite the difficulties,” Zuma’s office said in a statement.

Zuma said raids by Nato, which is enforcing a no-fly zone over Libya and protecting civilians from a government crackdown under a UN mandate, were undermining African mediation efforts.

The former soldiers were in Libya with the blessing of Britain, France and other Nato countries and were gathering information about the location and movement of Gaddafi’s troops and passing it on to Nato’s command centre in Naples, military sources told the Guardian.

Defence ministry officials denied the private soldiers were being paid by the British government and insisted it had no combat troops on the ground.

The Guardian said the soldiers were reportedly being paid by Arab countries, notably Qatar.

UN under secretary-general B Lynn Pascoe told the UN Security Council, meanwhile, that at least 1 200 people have been killed or are missing after trying to flee Libya by boat since the start of the uprising against Gaddafi in mid-February. — AFP