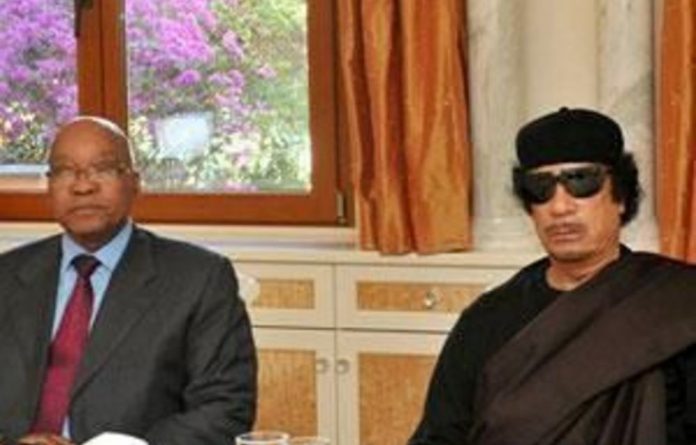 In rebel-held eastern Libya, an explosion damaged a hotel used by rebels and foreigners in Benghazi, wounding one person, and police said rebel authorities believed the explosion might be linked to Gaddafi agents still operating in the east.

Abdel Hafiz Ghoga, vice-chairperson of the rebel National Transitional Council in Benghazi, told Reuters the explosion outside Tibesti hotel was believed to have been caused by a hand grenade thrown in a “desperate attempt” by Gaddafi’s loyalists to sow terror.

Explosions were also heard in central Tripoli in the early hours of Thursday morning. Aircraft could be heard flying overhead but no further information was immediately available.

The defection by National Oil Corp head Shokri Ghanem, who is also a former prime minister, came two days after the defections of eight army officers including five generals and those in earlier weeks of senior diplomats and former ministers.

“I left the country and decided also to leave my job and to join the choice of Libyan youth to create a modern constitutional state respecting human rights and building a better future for all Libyans,” he said.

Speaking at a news conference in Rome organised by the Libyan ambassador, who has also defected, Ghanem said he had left his job because of the “unbearable” violence in Libya.

“I have been working in Libya for so many years believing that we can make a lot of reform from within. Unfortunately this became not possible, especially now, when we see the spilling of blood every day in Libya, our best youth and our best men getting killed.”

Ghanem, who is one of the most senior Libyan officials to have defected, said he still saw some possibility of a peaceful settlement to decide the fate of Gaddafi’s 41-year-old rule. But he added that the last time he saw Gaddafi was “months ago”.

“In recent days and weeks, we have seen an acceleration in the number of defections from the Gaddafi regime as it realises that the regime has no legitimacy, no credibility and no future,” rebel spokesperson Ghoga said in a statment.

Ghanem, whose whereabouts had been unknown for several days, also said oil production in Libya is coming to a halt because of the international embargo.

Now in its fourth month, the Libyan conflict is deadlocked, with rebels unable to break out of their strongholds and advance towards Tripoli, where Gaddafi appears to be firmly entrenched.

Rebels control the east of Libya around Benghazi, the third-biggest city Misrata, and a mountain range stretching from the town of Zintan, 150km south of Tripoli, towards the border with Tunisia.

Nato said on Wednesday it had extended its Libyan mission for a further 90 days, after Gaddafi made it clear he would not step down, dashing hopes of a negotiated end to the fighting.

Zlitan rising
The 28-member alliance originally took over a campaign of air strikes, the enforcement of a no-fly zone and an arms embargo on Libya to protect rebellious civilians from attack by Gaddafi’s forces in late March for 90 days.

“Nato and partners have just decided to extend our mission for Libya for another 90 days,” Nato secretary general Anders Fogh Rasmussen said in a statement. “This decision sends a clear message to the Gaddafi regime: We are determined to continue our operation to protect the people of Libya.”

South African President Jacob Zuma said on Tuesday after talks with the leader that Gaddafi had stated emphatically he would not leave Libya — making a negotiated end to the conflict impossible given rebel demands for his departure.

Zuma was in Tripoli on Monday to try to revive an African “roadmap” for ending the conflict, which started in February with an uprising against Gaddafi and has since turned into a war in which thousands of people have been killed.

A source in Misrata said the city was calmer early on Wednesday after a Reuters photographer reported heavy fighting in the suburb of Dafniyah, in the west of Misrata, on Tuesday.

A rebel spokesperson in Zlitan, one of only three towns separating Misrata from Tripoli, said Gaddafi was arming criminals to crush a rebellion against his rule there.

The spokesperson, Mohammed, said forces loyal to the Libyan leader were recruiting criminals whose task was to arrest anyone suspected of being a rebel and to intimidate residents.

“They filled it with drug dealers, criminals and other crooks,” Mohammed said by telephone. “They gave them automatic weapons and hand grenades to oppress the residents.”

In response to the allegations, an official for the Gaddafi government told Reuters: “These reports are completely false. There is nothing happening to that effect in Zlitan … We are surprised by the lack of verification in such reports.”

Speaking from Nalut in the Western Mountains, rebel spokesperson Kalefa said by telephone that revolutionary forces there had taken over the Shakshuk area near the city of Jadu after fighting in the early hours of Wednesday.

Parts of the Western Mountains have been without electricity this week, and it is believed that the electricity station in Shakshuk supplies power to many of these areas.

Shakshuk represents a major advance for the rebels because it is well north of their usual positions and deep inside territory controlled by pro-Gaddafi forces.

Gaddafi says his forces are fighting armed criminal gangs and al Qaeda militants and says the Nato intervention is an act of colonial aggression aimed at grabbing Libya’s oil reserves.

His government says Nato’s bombing campaign has killed 718 Libyan civilians and wounded 4 067, 433 of them seriously.