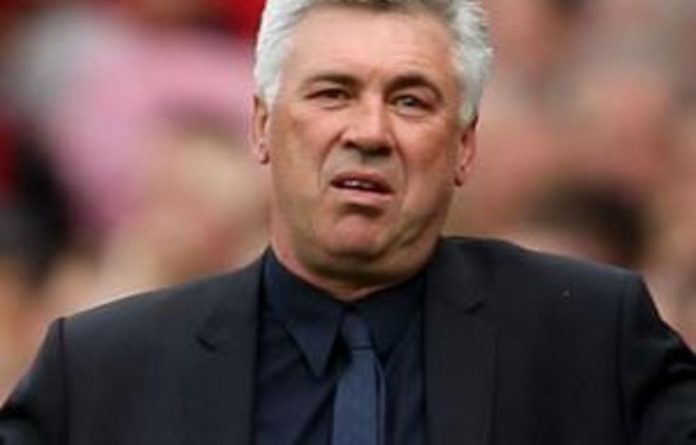 The Goodison Park stairwell where Carlo Ancelotti was reportedly sacked is a warm and friendly part of the ground, where veteran doormen in blazers exchange pleasantries with old school Evertonians and Bill Kenwright, the club’s chairperson, floats through dispensing bonhomie.

It is a place, in other words, of decorum and permanence and not the kind of area where a capable manager would expect to be dispatched moments after being allowed to say, in a post-match press conference, that a meeting would be held the following week to discuss his future. Ancelotti was fired like a junior accountant who had been caught fiddling the Christmas party fund and made to travel back to London like a pariah.

At least West Ham United, who dismissed Avram Grant in the tunnel, could cite relegation as the natural full stop at the end of their manager’s Upton Park career. Only 12 months had passed since Ancelotti scored Chelsea’s first Premier League and FA Cup double.

The early termination of his three-year deal at Stamford Bridge was handled in a manner that will make all future managers wary of Ron Gourlay, the Chelsea chief executive who did his master’s bidding. In wielding the axe so swiftly Gourlay either has no sense of etiquette or is too weak to stand up to Roman Abramovich, who might have been persuaded to wait until Monday morning at least.

One of Abramovich’s failings is to misunderstand the connection between boardroom behaviour and the tone set in and around a football club. In reality, Ancelotti was discarded by degrees. He was knocked to the ground when his No 2, Ray Wilkins, was sacked and given a kick when Abramovich bought Fernando Torres for £50-million and forced the manager to play him ahead of Didier Drogba — not by edict, necessarily, but certainly by implication.

The surest sign that Ancelotti knew his time was up came at the Premier League title decider at Old Trafford, when he left Torres on the bench and started with Drogba in Chelsea’s best formation: 4-3-3. This defiance failed to halt Manchester United’s march to a 19th English championship but it reminded the rest of football that the former Milan coach knew what he was doing.

The charge of passivity against Ancelotti is well-founded. From the moment Wilkins was culled he looked a passenger on his own ship. The arrival of Torres snuffed the life out of him. He was caught between Abramovich’s meddling and the listlessness of a side which had always corrected bad spells of form in the past. It is true that Ancelotti seemed dazed, but it was Abramovich who caused the change, reacting with his usual autocratic clumsiness to a mid-season slump of the kind Ancelotti will have come through many times in Milan. Again the disconnect in the Chelsea owner’s mind is between cause and effect.

Weakened
Managers who are undermined from above are weakened in the eyes of players and start making political calculations about their own future when they would prefer to be planning two or three seasons ahead.

Since Abramovich decided he was a professor of the game he has dispensed with Claudio Ranieri, Jose Mourinho, Avram Grant, Luiz Felipe Scolari and now Ancelotti. Guus Hiddink, who is being tipped to return, was only a caretaker in 2009. So the prevailing culture in the Chelsea dressing room has lurched from Italian to Portuguese to Israeli to Brazilian to Dutch back to Italian and maybe now on to Dutch again. The Bridge is about to welcome its seventh manager in eight years.

Each upheaval brings new practice methods, new relationships at the training ground, different managerial likes and dislikes and often an altered tactical approach, all of which the players must learn. Chelsea’s senior players have been resilient in the face of these repeated culture shocks, but must be reaching the point where their powers of adaptation are stretched to twanging point.

This instability is now built into the system. Speculation about Ancelotti’s job started with the winter of discontent and intensified the moment they were knocked out of the Champions League — Abramovich’s obsession. Each manager joins knowing that failing to win the European Cup is grounds for dismissal, and dismissal usually comes before the manager has had sufficient time to impose his vision of how the European Cup can be won.

The brutality and shallowness of Abramovich’s decision-making is now causing serious offence among Chelsea’s supporters, who compare their club with Manchester United and ask whether their benefactor understands the nature of football empire building. With advisers feeding him the latest wisdom, he veers from one guess to the next, doling out huge compensation payments to men who turn out not to have been the answer after all.

To avoid the slow death Ancelotti might have stomped out with Wilkins. But the top managers will tell you a reluctance to resign on a point of order is often rooted in a sense of responsibility to one’s staff. When the head coach goes, half a dozen others go with him. Aside from craving his own £6-million pay-off Ancelotti will have wanted to protect appointees who will now join him on the jobs market.

United and the Premier League’s other top clubs are the big winners each time Abramovich rips it up and starts again. He is a child of Soviet power, which was always loaned, never given. —