‘Only a matter of time’ before Gaddafi falls 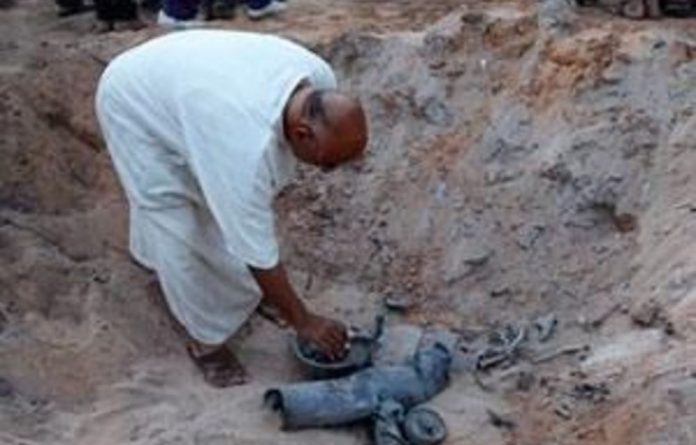 Nato warplanes battered Muammar Gaddafi’s command network in Tripoli, it said on Monday ahead of a visit to Libya by an envoy from Russia, which has raised concerns about the military campaign.

Five powerful blasts rocked Tripoli late on Sunday after three waves of explosions during the day, as warplanes overflew the city which has been the target of intense Nato raids for the past two weeks.

In a statement, the military alliance said it conducted “intensive and sustained strikes against pro-Gaddafi facilities in Tripoli throughout the day and night”, including command and control centres.

“We will continue to erode [the Gaddafi regime’s] foundations until the violence against the Libyan population ends,” it quoted Lieutenant-General Charles Bouchard, commander in chief of the Nato mission, as saying.

The latest salvos came as Russian mediator Mikhail Margelov prepared to head the Libyan rebel stronghold of Benghazi on Monday after Moscow voiced concerns at the weekend about the Nato operation sliding towards a land campaign.

Russia, which is calling for a negotiated solution to the conflict, expressed alarm at the weekend as Nato’s air war entered a new phase with the deployment of British and French attack helicopters.

“We consider that what is going on is either consciously or unconsciously sliding towards a land operation,” Foreign Minister Sergei Lavrov said.

“That would be very deplorable,” Lavrov, quoted by the RIA Novosti news agency, added of the British and French decision.

It was a concern reiterated on Sunday by Russian Deputy Prime Minister Sergei Ivanov, who expressed doubt that Nato’s use of helicopters was an acceptable way to impose a no-fly zone set out under a UN resolution.

“[Nato is] using attack helicopters on land targets, which is in my view the last but one step before the land operation,” said Lavrov.

British Foreign Secretary William Hague on Sunday defended the use of the helicopters and ruled out putting forces on the ground, saying Nato would stick to the terms of UN Resolution 1973 passed in March to protect civilians.

Hague admitted the Nato operation was “intensifying” and that there was no deadline, but denied any “mission creep” for the aerial bombing campaign launched nearly three months ago.

“We’re not going to set a deadline. You’re asking about Christmas and who knows, it could be days or weeks or months, [but] it is worth doing,” he told BBC television.

“This is not mission creep, changing the nature of the mission, this is intensifying what we are doing in order to make this mission a success,” he added.

Hague made the remarks a day visiting Benghazi where he met the head of the opposition National Transitional Council, Mustafa Abdul Jalil, and toured a medical centre treating war wounded.

Jalil had praised the decision by Britain and France to deploy the attack helicopters, saying: “We welcome any action that could precipitate the end of [Muammar] Gaddafi’s regime.”

Britain said on Sunday its Apache helicopters destroyed a multiple missile launcher operated by Gaddafi forces near the eastern oil hub of Brega.

“At sea, HMS Ocean launched her British Army Apaches against a multiple rocket launch system positioned on the Libyan coast near Brega,” Major General Nick Pope, spokesperson for the Chief of Defence Staff, said in a statement.

“The attack helicopters used Hellfire missiles to destroy their target before returning safely to the ship.”

US Defence Secretary Robert Gates said meanwhile that it was only a matter of time before Gaddafi’s aides abandoned him.

“It’s only a matter of time [before he falls],” Gates said. “I don’t think anyone knows how long. But I think you see signs the regime is getting shakier by the day.

“It’s just a question when everybody around Gadaffi decides it’s time to throw in the towel and throw him under the bus,” he said on a visit to Afghanistan.

Neighbouring Tunisia, meanwhile, kept up the grim task of attempting to recover the bodies of more than 200 migrants fleeing Libya’s conflict after their boat capsized, a coastguard said.

And Iman al-Obeidi, who grabbed world headlines after accusing Gaddafi’s soldiers of torturing and raping her, left Benghazi for the United States, her sister told AFP, after she was deported without explanation by Qatar on Saturday. – AFP