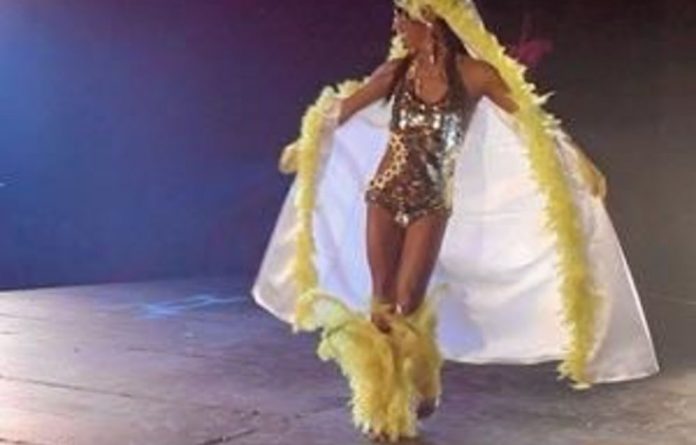 I’d like to introduce you to Mr and Mr Stroebel.

One is the winner of Miss Gay Western Cape (that’s Kat, aka Carl); the other, Errol, a finalist in Mr Gay South Africa. People call them the Posh ‘n Becks of the gay pageant world. I prefer to think of them as Fred and Ginger: everything the one does, the other does — backwards, in high heels.

The couple is featured in Lauren Beukes’s new documentary, Glitterboys & Ganglands, which follows the build-up to and finals of the 2010 Miss Gay Western Cape pageant.

Kat (not in drag, doing a very handsome impersonation of Carl) says she started competing because she wanted to be involved in Pride. “As a couple, we only took time to go into the pink community to party. We didn’t know what was going on. We wanted to find out more about where we really are as a gay community. I wanted to be a marshal or something, but everything was taken — except for the pageant.”

Kat says her first drag experience was “very weird; it was in the daytime, the sun was bright — it was last year February. It was scary because people were looking. And I was in hot pants and a bra top. Walking in heels wasn’t so bad, because I always walk on my toes.”

Errol adds that he was amazed when his partner put on drag for the first time. “It almost freaked me out, to see my partner looking like a woman.”

Now, Errol is responsible for putting together most of Kat’s pageant and appearances wardrobe — he sources shoes and accessories, and makes the clothes himself. “You won’t see Kat without her bling on,” he promises, describing the one-shouldered dress he’s crafted for the Cape Town premier of Glitterboys. Errol will shortly be launching his own underwear line, which he plans to call Stroebel Republic.

Taking the lead
Image is everything, and Errol likes to be in control. He recalls a time Kat appeared (in drag) in public wearing flat shoes. “They were gladiator sandals,” Kat retorts. “You were on TV. In flats,” Errol says, in mock horror. Kat retaliates by reminding Errol that he once broke a brand new pair of Luella heels when he [Errol] tried them on for fun. “I hadn’t even worn them yet,” she says, sadly.

There’s an easy banter between the couple — who have been together for seven years, and are married (although they were a little cagey about this in the documentary itself). They’re competitive, but there’s no doubt it’s the healthy kind: Errol is Kat’s biggest fan, and most important pillar of support. When, in the weeks before Miss Gay Western Cape, Kat lost her father, it was Errol’s encouragement (and support from Kat’s family) that gave her the strength she needed to go through with the event. When talking about Kat’s winning, Errol swells with emotion. “I was the one crying, not him,” Errol explains, smiling. “I’m really proud of my partner. I love watching him shine on stage.”

As much as one part of the gay community celebrates Kat’s and Errol’s successes, there’s a not-insignificant part that seems interested only in rumours and scandal.

“Since [Miss Gay Western Cape] we’ve gotten lost,” Kat says. “Everyone wants to know what we’re doing, 24 hours a day. Sometimes I’d like to respond, but I have to shut up because of the title. I call Facebook ‘Gossip Girl’ because you never know what you’re going to hear next.”

The anonymity of online makes it easy for people (almost exclusively from within the LGBTI — lesbian, gay, bisexual, transgender and intersex — community) to post allegations of affairs, of flirtations, to accuse Errol and Kat of competing with each other rather than for each other. It’s hard to reconcile the brittle veneer of bitchiness that coats many of the stories about Errol and Kat with the gay community’s simultaneous desire to get on the pretty boy bandwagon (particularly since the launch of the film) — in one example, a story supposedly about the couple’s love for each other got turned into a tawdry headline about Errol’s “package”. Kat and Errol seem a bit bewildered by all the negative attention, but seem to accept that this is part of the price of the limelight they both obviously enjoy.

The pair plan on eventually developing a full clothing line — “I want a coffee shop and a dress shop,” Kat says (Errol will make the dresses, of course). They also want to make dresses and accessories available to those who would like to participate in pageants but don’t have the finances to do so.

Beautiful reception
The straight community, by comparison, seems, if not always welcoming, than certainly less hostile than expected. Kat has been surprised by the incredible reception she’s had, in areas like Lavender Hill, where her appearance in drag was celebrated by the local residents. “It was beautiful,” she says.

Kat adds that, when she’s out [dressed as a woman] she often gets mistaken for a woman by straight men who try to buy her drinks. Her standard response is, “I’m an independent woman, I can buy my own.”

I asked if she was worried how straight men would react if or when they worked out she was actually a man in drag. “I’ve never had a straight guy freak out,” she says. “Mostly, what they’ll say is: you’re really beautiful, I didn’t know.”

Comments on SA's murder rate and the quality of life of white South Africans have been grossly exaggerated. Nechama Brodie tells us why.
Read more
Friday

Bitter bites the hand that feeds

It’s been five years since their last appearance, but Konradski and Joe Dog are back: older, a little more jaded – and with fewer penises.
Read more
Advertising