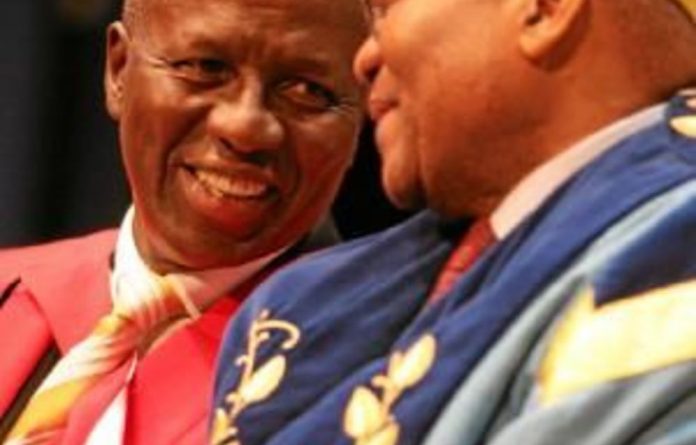 It was always highly unlikely that President Jacob Zuma would allow Deputy Chief Justice Dikgang Moseneke to become chief justice, according to advocate Paul Hoffman, director of the Institute for Accountability in South Africa.

“You don’t think that was going to happen after what the president did last time,” he said, referring to Zuma’s announcement in 2009 of Sandile Ngcobo’s nomination to take over from Chief Justice Pius Langa when he retired.

Hoffman described Zuma’s recent decision to extend Ngcobo’s term by another five years as “unconstitutional, illegal and invalid”. “I say this with a heavy heart. Sandile Ngcobo is a proper judge because he knows what the role of the rule of law is in a constitutional democracy.

“And if an Act of Parliament were to be passed that would extend his term, I would welcome his reappointment,” said Hoffman. “But as no Act of Parliament that allows this extension has been passed, I must be true to the law and therefore critical of the president’s decision.”

Ngcobo’s 12-year term is coming to an end in September, but Zuma announced last week he would be extending the term to 2016 in terms of the Judges’ Remuneration and Conditions of Employment Act.

Legal sources said that Moseneke was widely regarded in legal circles as “too independent” for the post.

In 2008 the ANC issued a statement complaining that comments Moseneke made at his birthday party had shown disdain for its delegates to the ANC’s national conference in Polokwane in 2007, but it later retracted its complaint.

At the time Moseneke was quoted by the Sunday Times as saying: “I chose this job very carefully. I have another 10 to 12 years on the Bench and I want to use my energy to help create an equal society. It’s not what the ANC wants or what the delegates want; it is about what is good for the people.”

Hoffman said Zuma might also be concerned about three coming legal challenges in the Constitutional Court, two by the Democratic Alliance — the controversial appointment of Menzi Simelane as prosecutions boss and the decision by former acting prosecutions head Mokotedi Mpshe to drop corruption charges against Zuma — and Terry Crawford-Brown’s bid to force Zuma to appoint a commission of inquiry into the R30-billion arms deal in which Zuma himself was implicated.

Hoffman said the Constitution clearly stated that a Constitutional Court judge could hold office for a non-renewable term of 12 years, or until he or she reached the age of 70, whichever occurred first, except where an Act of Parliament extended the term of office of a particular judge.

Professor Pierre de Vos, a constitutional law expert, wrote in his online blog, Constitutionally Speaking, that the Constitution was amended in 2001 to accommodate respected former chief justice Arthur Chaskalson and extend his term of office but after much heated debate Chaskalson retired.

“At the time, many constitutional lawyers argued that this amendment was unwise and opposed it. Some lawyers who respected and even revered Chaskalson had a problem with the amendment (generally known as the Chaskalson amendment) because it was argued that as a matter of principle it was unwise for politicians to be involved in extending the term of office of a judge, especially the chief justice.”

The problem was that it would ­create the impression that the judge was not independent, he said.

Professor Raylene Keightley, director of the Centre for Applied Legal Studies at Wits University, said the legal provisions that the president used to extend the chief justice’s term would be challenged.

“We wish to emphasise that the challenge is not directed at the current chief justice, or at his competence, integrity or other attributes. The case raises fundamentally important constitutional issues involving among others, the independence of the judiciary.

“Clarity on these issues is of vital importance to the administration of justice in South Africa and our challenge is therefore brought with the broader public interest in mind,” Keightley said.