Working for Chinese is ‘hell on earth’ 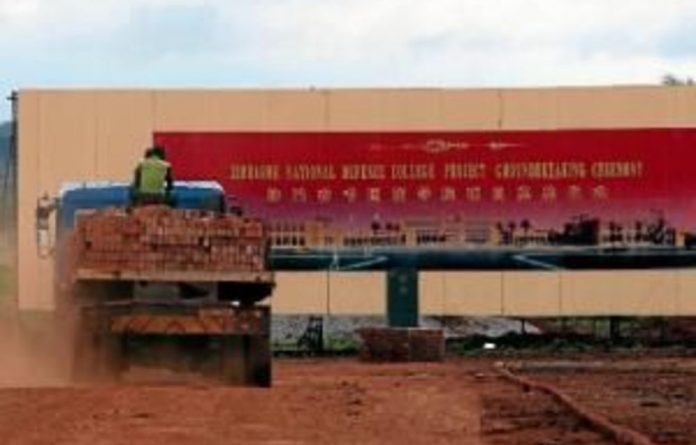 On the northern verges of Harare the ­massive new military ­college is taking shape, a monument to China’s tightening hold on Zimbabwe.

The complex is also a symbol of growing hostility from Zimbabwe’s labour force towards Chinese employers. It is being built using a controversial Chinese loan and its workers have gone on strike to protest against beatings by their bosses and low pay.

Zimbabwe will receive $98-­million for the college’s construction, which is being undertaken by a Chinese contractor. The loan will be repaid over 20 years through earnings from the controversial Chiadzwa diamond fields that are being mined by Anjin Investments, another Chinese firm.

The college is a sprawling, heavily guarded complex with high security walls that run for a kilometre through what used to be farmland. Two weeks ago workers at the site went on strike, alleging that the Chinese managers of Anhui Foreign Economic Construction Company were guilty of assaulting them and demanding an increase on their $4 daily wage.

Chinese businessmen are targeting Zimbabwe’s minerals, but many more are arriving to run businesses in the construction, manufacturing and retail sectors. In Harare, Chinese restaurants are all the rage, packing in customers drawn to their exotic health foods and herbal teas.

China Garden, a suburban Chinese restaurant with brightly coloured golden dragons at the entrance, is hugely popular with the middle classes and diplomats.

But last month cook Patrick Makaza quit his job at the restaurant, saying he had been beaten by his bosses. “Working for these men from the East is hell on earth,” he told the independent daily newspaper NewsDay. “Most of us are suffering in silence, but I have decided I can only go so far and will go no further.”

The hostility of local workers and traders — even among Zanu-PF supporters — is mounting as the number of Chinese businessmen in the country grows. In Chiadzwa, the Zimbabwe Federation of Trade Unions, a Zanu-PF ally, has taken Anjin investments to court to recover allowances it said are owed to workers.

David Chapfika, a Zanu-PF member who heads the government board responsible for implementing controversial empowerment laws, has also complained about Chinese nationals’ involvement in small businesses.

“I know the Chinese are our friends, but I’m sorry to say that when we talk of the indigenisation programme we can’t ignore the fact that they have ventured into business activities that can easily be done by locals.”

The trade unions are pushing for action. The Zimbabwe Construction and Allied Trade Workers’ Union, for example, has petitioned the labour ministry to end the abuses. “Workers continue to endure various forms of physical torture at the hands of these Chinese employers right under the noses of the authorities,” a union spokesperson said.

“One of the most disturbing developments is that most of the Chinese employers openly boast that they have government protection and so nothing can be done to them. This clearly indicates that the issue has more serious political connotations than we can imagine.”

National Mine Workers’ Union of Zimbabwe secretary Cotten Ndlovu told the Mail & Guardian that workers at Chinese mines were often forced to work long hours for low pay and with inadequate protective clothing.

“We have been to Chinese-owned mines in the Midlands province. The conditions we found there are unimaginable. The safety of workers is at stake and this is a great concern to us,” Ndlovu said.

He added that the union had often been denied entry to the premises of Chinese mines.

Yet the Chinese themselves seem increasingly concerned. Last week, the Chinese Communist Party sent a delegation led by the chair of the party’s overseas Chinese affairs committee, Yu Linxiang, to investigate how Chinese nationals are relating to locals.

“Our delegation came to Zimbabwe to meet the Chinese people in Zimbabwe and particularly [to] learn how they live and how they deal with the Zimbabwean people,” Yu said after meeting MPs.

Festus Dumbu, a Movement for Democratic Change MP who opposed the loan for the military college in Parliament, said abuses were being ignored to appease China. “Have the Chinese become immune to the Zimbabwe law to the extent that we have never had any Chinese who have been arrested for assault or abuse of workers?” he said.

Trade between the two countries stood at $550-million last year, according to the Chinese consulate. Reports suggest China plans up to $10-billion in investments over the next five years, more than the amounts pledged by any other state.