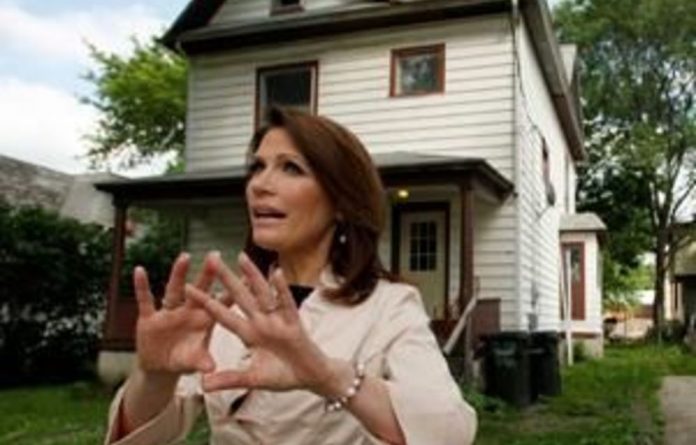 United States Representative Michele Bachmann, a favourite of Christian conservatives and anti-tax Tea Party activists, kicks off her presidential campaign on Monday in Iowa where she hopes home field advantage will give her an early edge among Republicans seeking to challenge President Barack Obama.

Bachmann, a three-term congresswoman from neighbouring Minnesota, planned to hold a rally in Waterloo, Iowa, her birthplace. The Iowa Poll released on Saturday night by the Des Moines Register showed her in a statistical tie with perceived Republican frontrunner, former Massachusetts governor Mitt Romney, among likely caucus-goers.

In an interview with the Associated Press on the eve of her entry in the 2012 Republican presidential race, Bachmann pulled her punches somewhat in attacking Obama.

“I don’t have anything personal about our president. But he’s just wrong. But his policy prescriptions have been wrong.”

The nothing-personal message was a departure from her 2008 comments questioning whether Obama had “anti-American” views. She has said she wishes she framed her criticism differently.

In an appearance on Sunday on CBS television’s Face the Nation, Bachmann said she found the poll results gratifying but noted that the race for the nomination was just beginning.

The poll showed Romney with 23% support and Bachmann with 22% among those who said they were likely to vote in the nation’s first Republican nomination contest.

They were followed by former pizza chain CEO Herman Cain, another Tea Party favourite, with 10%; former House speaker Newt Gingrich and libertarian-leaning Representative Ron Paul of Texas with 7% each, and former Minnesota governor Tim Pawlenty with 6%.

The results are based on telephone interviews with 400 likely Republican Iowa caucus-goers from June 19 to 22. It has a margin of error of plus or minus 4.9 percentage points.

On the eve of her campaign launch, Bachmann staked out positions in the CBS interview certain to appeal to the Tea Party movement which supports sharp reductions in government spending and opposes tax increases.

Bachmann said “scare tactics” are being used by those warning of an economic calamity unless Congress raises the government’s borrowing limit by an August 2 deadline. She said the US could avoid a default by paying only the interest on US obligations while lawmakers work on a deal to cut spending dramatically as part of a new debt ceiling.

‘Unworkable approach’
Such an approach has been derided as unworkable by Treasury Secretary Timothy Geithner.

Obama planned separate meetings on Monday with Senate leaders as negotiations on trimming spending and raising the debt ceiling moved into a new stage. Talks among lawmakers of both parties ended last week when Democrats and Republicans reached an impasse over whether there should be any role for additional revenue in reducing the deficit.

Officials say the nation’s borrowing will exceed its $14.3-trillion limit on August 2 and that economic shockwaves around the world would result from the first financial default in US history.

“It isn’t true that the government would default on its debt,” Bachmann said on CBS. She later added, “It is scare tactics.”

Geithner, she said, “can very simply pay the interest on the debt first, then we’re not in default”.

Geithner has dismissed the idea that the US could avoid a default by just paying the interest on the national debt and picking which bills to pay, contending that even trying to do so would roil financial markets and make it more expensive to finance what the government does owe.

Bachmann said she wasn’t willing to allow the government to keep borrowing money and putting the country into a worse state.

“One year from now, we’ll be back, having this same conversation,” she said. “That cycle has to stop.”

Such outspoken positions could make Bachmann a natural fit for the electorate which will turn out next February for the Iowa Republican caucuses. Former Arkansas governer Mike Huckabee, a Baptist minister, won the Iowa caucuses in 2008 with strong support from evangelical pastors and Christian home-school advocates.

Bachmann also has proven to be a robust fundraiser. She raised $13.5-million toward her House campaign last year, the most of any 2010 candidate, drawing support from a grass-roots network of thousands of small donors.

A strong finish in Iowa for Bachmann could launch her as the key challenger to establishment Republicans in later nominating contests, most notably Romney.

Romney, who sought his party’s presidential nomination in 2008, already faces questions from Bachmann and other rivals about his record of changing positions on social issues including abortion and gay rights, shifts that have left conservatives questioning his sincerity. In addition, Romney championed a health care law enacted in Massachusetts that is similar to Obama’s national health overhaul, which conservatives loathe.

But Republicans might shy away from Bachmann if they are more concerned about choosing the most electable candidate in a position to defeat Obama. There are questions whether Bachmann could reach beyond the Republican base to appeal to the moderate independent voters needed to defeat Obama in the November 2012 election.

She is known for piercing and sometimes inaccurate commentary. She once falsely complained that taxpayers would be stuck with a $200-million per day tab for an Obama trip to India and accused the first black US president of running a “gangster government”. – Sapa-AP