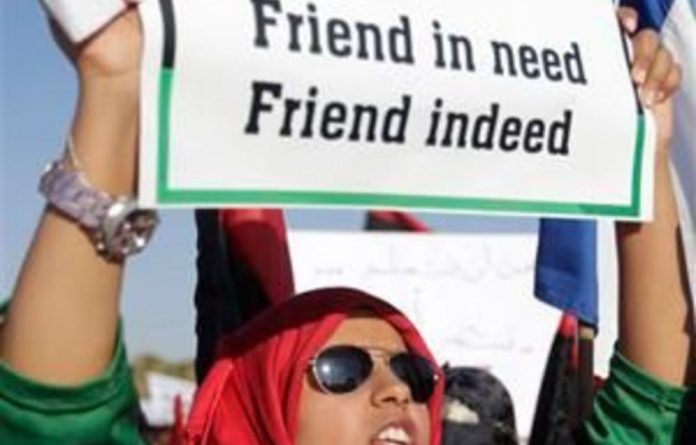 Libyan leader Muammar Gaddafi vowed to attack “homes, offices and families” in Europe in revenge for Nato airstrikes but United States Secretary of State Hilary Clinton said he should quit instead of issuing threats.

In a telephone address relayed to 100 000 supporters in Tripoli’s Green Square, Gaddafi urged Nato to halt its bombing campaign or risk seeing Libyan fighters descend on Europe “like a swarm of locusts or bees”.

Gaddafi, who along with his son and spy chief faces an international arrest warrant for crimes against humanity, has vowed to fight to the end and branded the Nato operation a colonial aggression aimed at securing Libya’s oil riches.

“Retreat, you have no chance of beating this brave people,” Gaddafi said in his address broadcast on Friday.

“They can attack your homes, your offices and your families, which will become military targets just as you have transformed our offices, headquarters, houses and children into what you regards as legitimate military targets,” he said.

“If we choose, we can descend on Europe like a swarm of locusts or bees. We therefore advise you to retreat before you face catastrophe.”

Clinton on Saturday brushed off Gaddafi’s remarks and stepped up calls on him to quit.

“Instead of issuing threats, Gaddafi should put the well-being and the interests of his own people first and he should step down from power and help facilitate a democratic transition,” Clinton told a news conference during a visit to Nato member Spain.

Spanish Foreign Minister Trinidad Jimenez, whose country was targeted by Islamist militants in simultaneous train blasts in 2004 that killed 191, said the alliance stance was unchanged.

“Spain’s and the international coalition’s response is to maintain the unity and determination with which we have been working these past months,” she said.

Gaddafi’s speech came as Libyan rebels, who had advanced to within 80km of the capital were stopped in their tracks by a barrage of rocket fire from government forces, underlining the dogged resistance of Gaddafi troops to a five-month revolt.

Coalition military officials refuse to characterise the situation on the ground as a stalemate after a 104-day bombing campaign that has strained alliance firepower and tested unity, with internal divisions over strategy surfacing.

A rebel advance from the Western Mountains to just outside the small town of Bir al-Ghanam this week had raised prospects of a breakthrough, but they have been pinned down by Gaddafi forces who on Friday attacked with Russian-made Grad rockets.

Gaddafi refuge?
Analysts say part of Nato’s strategy is to use the attacks to hinder efforts by authorities to put down any future uprising in Tripoli. Britain’s defence ministry said Apache helicopters hit three tanks and a bunker firing position in an attack on an army camp west of Tripoli late on Friday.

London-based Asharq al-Awsat newspaper reported that Gaddafi’s representatives had been meeting officials from France and Britain on the Tunisian island of Djerba.

Citing unnamed sources from the Gaddafi and opposition camps, the newspaper said Gaddafi was willing to step down if he was spared prosecution and allowed to live in his hometown of Sirte, northern Libya, with guarantees for his security.

African Union leaders offered on Friday to host talks on a ceasefire and transition to democratic government, but left open whether there was any future role for Gaddafi. There was no immediate reaction from either side to the offer.

A document seen by Reuters at the end of the summit in Equatorial Guinea said member states would not excecute the arrest warrant for Gaddafi, leaving open the possibility that he could go into exile in one of the African Union’s 53 nations. – Reuters