Jimmying up the battle for succession 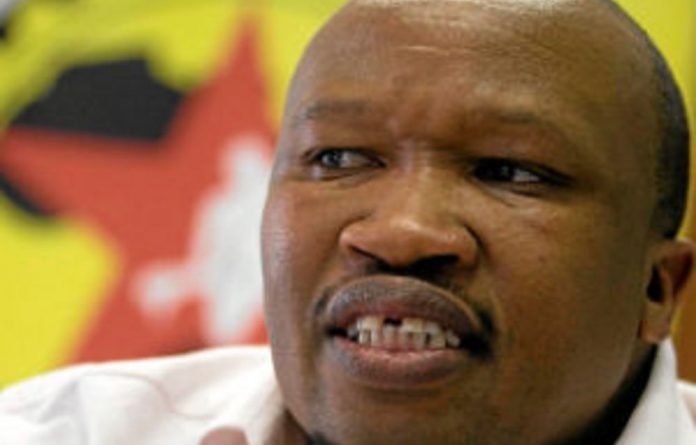 National Union of Metalworkers of South Africa (Numsa) boss Irvin Jim, who is leading the national metal and engineering workers’ union wage strike, has been touted as a possible successor to Cosatu general secretary Zwelinzima Vavi.

Cosatu holds its congress next year and Vavi, who has expressed a wish not to be re-elected, is tipped for a post in either the ANC or the South African Communist Party’s top echelons if he is not persuaded to stay in the trade federation.

Several Cosatu leaders, who spoke to the Mail & Guardian this week on condition of anonymity, confirmed the behind-the-scenes lobby to push Jim into the federation’s hot seat.

The other possible contender for the position is National Union of Mineworkers (NUM) general secretary Frans Baleni, who is close to the ANC and SACP secretaries general, Gwede Mantashe and Blade Nzimande respectively.

But Vavi-aligned supporters believe Baleni is too soft for Cosatu’s top position and that he is sympathetic to government’s conservative economic policies. Jim, on the other hand, is seen as a hardcore communist who has been a driving force in pushing for radical policy changes in the ANC, something that has earned him both respect and scorn among those who see him as a thorn in the side of the alliance.

The National Union of Metalworkers of South Africa has embarked on a strike, following a breakdown in negotiations at the end of June. The union has vowed not to budge on its demands for a 13% across-the-board wage hike, better working conditions and a ban on labour brokers.

Under former president Thabo Mbeki’s leadership, many in the ANC and government saw Numsa as one of the more pliable trade unions within Cosatu. But, not long after he took over in 2008, Jim launched a scathing attack on Planning Commission Minister Trevor Manuel and former Reserve Bank governor Tito Mboweni for their liberal economic policies. He also lashed out at senior ANC leaders who argued that nationalisation was not ANC policy.

“I don’t know what Freedom Charter people are reading and at which ANC conference it was changed. The Freedom Charter we know says the people shall share in the country’s wealth.

The national wealth, the heritage of our country, shall be restored to our people. The mineral wealth beneath the soil, the banks and monopoly industries shall be transferred to the hands of the people. All other industries and trade shall be transferred to assist the wellbeing of our people. In a country in which unemployment is so high, you must tamper with the macroeconomic policies. The government must ensure that the Freedom Charter is executed,” said Jim.

A new level
He was one of the leaders within the alliance who, with ANC Youth League supporters, was instrumental in pushing the ANC during its national general council last year to take a resolution to investigate the role of the state in mining.

Said one Cosatu leader: “If there is anyone who can take Cosatu to a different level it is Jim. He is an honest cadre and a revolutionary who is not afraid to speak truth to power.”

Numsa president Cedric Gcina described Jim as a democrat and a principled leader.

But not everyone within the alliance is happy with Jim, who hails from the Eastern Cape.

Nzimande, who has been working hard within Cosatu to get it to support President Jacob Zuma, is believed to regard Jim and Vavi as major obstacles to sway Cosatu towards Zuma. Both Jim and Vavi have been critical of Nzimande in the past few months, saying he was the main reason the SACP has become weak and less critical of government since his appointment as minister of higher education in 2009.

Nzimande is apparently the author of a scathing document that described Jim as a “workerist”, which the SACP presented to Cosatu at their bilateral meeting last week.

In the document, titled “Let’s Close Ranks to Defeat the New Tendency and its Vanguard — Populist Democracy”, Jim is accused of compromising Cosatu’s relationship with the SACP for the benefit of some nationalists in the ANC and the youth league.

Nzimande used a large part of the document for his speech delivered during the Cosatu central committee meeting last week, but took out Jim’s name, which features prominently in the bilateral document obtained by the M&G.

To illustrate Jim’s “workerist” tendencies, the document cites as an example his remarks at an event earlier this year commemorating Chris Hani’s death. Jim said Hani would be angered by capitalism’s continued barbaric ravages against the workers, the level of corruption in government, the weakening of the SACP and deployment of communist ­leaders in government.

“What is particularly distressing about interventions such as this is that Comrade Chris’s memory is invoked and usurped to equate capitalism’s barbarity, corruption in the state, tenderpreneurs and the SACP deployments.

This is workerism. Its workerism is especially evident if you consider other matters that Comrade Jim might have added to his list of things that would have angered Comrade Chris — for example: the neglect of critically ill patients by some healthcare workers in the course of the public-sector strike; the contempt for learners that some unionised teachers display; the shoddy service that some public-sector workers provide to ordinary citizens; corruption in the administration of some trade-union investment funds.

“We are not suggesting the SACP should publicly go on a union-bashing response to the workerist current, but we are saying that it is workerist to imagine that the trade union movement is some pure space of unsullied working-class militancy while the state and the SACP are compromised forces,” reads the document.