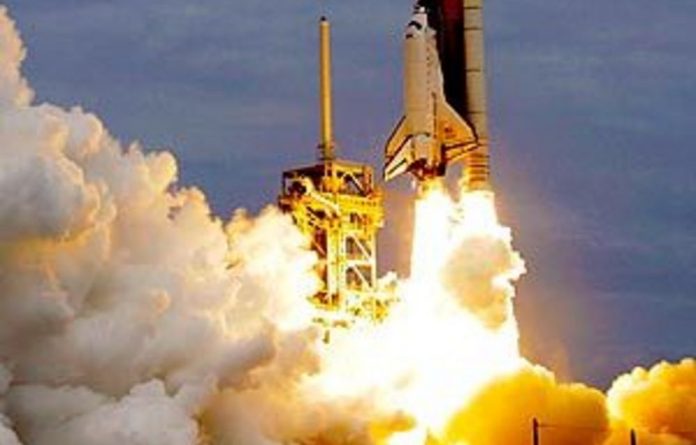 Atlantis blazed a path into history on Friday when it blasted off toward the heavens on the last-ever mission of the 30-year-old American space shuttle program.

The shuttle’s rockets ignited on schedule at 5.26pm South African time, carrying a crew of four United States astronauts toward the International Space Station on a 12-day mission to re-stock the orbiting lab.

The mission marks the end of an era in human spaceflight, leaving the United States with no spacecraft capable of taking astronauts to orbit and leaving Russia’s three-seat Soyuz capsule as the sole taxi to the ISS.

“For a final time, good luck and Godspeed,” said shuttle launch manager Mike Leinbach as NASA gave the Atlantis the go-ahead to launch heading for the ISS, where it is due to dock early Sunday.

Nostalgia, bitterness and sorrow mingled with pride at Kennedy Space Centre as thousands of workers watched their cherished spacecraft sail into the skies for a final time.

As many as 8 000 people are losing their jobs with the closure of the shuttle program, which was ordered by former president Richard Nixon in the 1970s and launched its first mission in 1981.

“The beginning of the end of the space shuttle era is this morning,” said Nasa spokesperson Allard Beutel, before the launch.

Down to Earth
“It is a sad time,” said Nasa astronaut Terry Virts, reflecting on what he called the “passion” of many of his coworkers. “The sad part about it is that we won’t have an American ability to launch astronauts anymore.”

Virts, who piloted the shuttle Endeavour’s mission to the orbiting lab in February 2010, said the absence of a project to replace the shuttle has left many people reeling.

“It is tough to end something without having a follow-on,” Virts said.

The Constellation program aimed at returning astronauts to the moon was axed by President Barack Obama last year in favour of focusing on deep space missions that could see Americans explore an asteroid and potentially Mars in the coming years.

Nasa has salvaged plans for the Orion space capsule, developed as part of Constellation, with the prospect of using them as the basis for a multipurpose crew vehicle that can venture into deep space.

Step up the game
Private companies like SpaceX, Boeing and Sierra Nevada are competing to become the first to build a next-generation space capsule that can take astronauts and cargo to the orbiting research lab.

Those plans are not likely to come to fruition before 2015 at the earliest.

“All of us are addicted to going to space,” said astronaut Cady Coleman, who recently returned from a six-month stint aboard the International Space Station.

“We always want more. We would go all the time if we could,” she said.

Once opportunities for space travel are limited to catching rides aboard the Russian Soyuz at a cost of $51-million per ticket, astronauts will just need to draw on the patience they have always needed to have, she said.

“If it [space travel] is the only thing you want to do … this is not the right job,” she said. “The job of an astronaut is much, much broader than going into space.”

Above and beyond the space shuttle
Earlier this week, Obama praised the shuttle for its long legacy in space exploration but said it was time to focus on new projects.

“In order to do that, we’ll need some technological breakthroughs that we don’t have yet.”

Of the six US space shuttles, the prototype Enterprise never flew in space, Challenger exploded after liftoff in 1986 and Columbia disintegrated on its return to Earth in 2003. Fourteen crew members died in the two disasters.

Museum pieces
Nasa plans to send the remaining three shuttles in the fleet — Discovery, Endeavour and Atlantis — to museums across the country to go on permanent display.

Meanwhile space fans jockeyed for spots along the “Space Coast” in the hopes of witnessing history.

“My whole life I grew up with the space shuttle,” said Nicole Solomon, 35, a producer who is visiting from California, and who plans to follow every detail of the shuttle’s last adventure in space.

Analysis of Nasa data shows that although SO₂ emissions around the world have fallen by about 6%, the levels are high enough to harm the health of billions of people.
Read more
Environment

YouTube has driven millions of viewers to climate denial videos, a US activist group said on Thursday as it called for stopping "free promotion...
Read more
Sci-tech

The spaceship was to collect 900 images over the course of a few seconds as it shaved by. Even clearer images should arrive over the next three days
Read more
Sci-tech

Scientists figured out in 2017 that Ultima Thule is not spherical but possibly elongated in shape. It may even be two objects
Read more
Advertising

Rhulani Nhlaniki is Pfizer’s cluster lead for sub-Saharan Africa. As Pfizer starts phase III of the clinical trial of their Covid-19 vaccine candidate, he tells Malaikah Bophela that if it is successful, the company will ensure the vaccine will be available to everyone who needs it
Read more
Opinion

It may be marketed by influencers, but intravenous vitamin therapy is not necessary and probably not worth the hype, experts say
Read more
Advertising