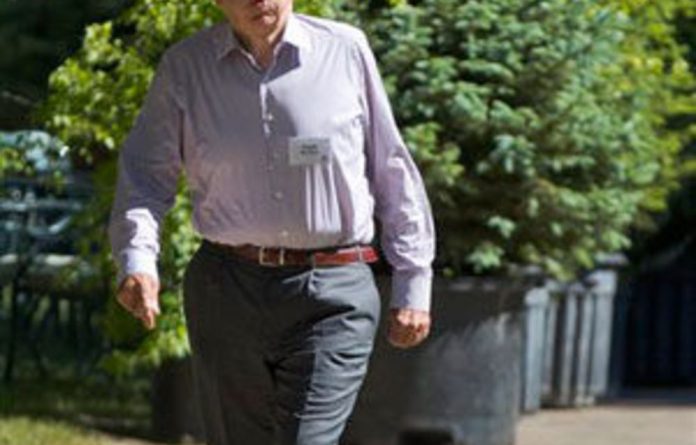 Shares in BSkyB fell further on Monday as the multi-billion-dollar bid from Rupert Murdoch’s News Corp to win control of the British satellite broadcaster hung in the balance, analysts said.

The share price plunged to 669 pence, underneath News Corp’s 700-pence offer price, amid talk that the bid could be scrapped after a phone-hacking scandal sparked the closure of Murdoch’s News of the World newspaper over the weekend.

The stock later recovered slightly, but finished at 715.50 pence, down 4.60% from Friday’s closing level after News Corp abandoned its pledge to sell off its Sky News television channel.

In response, Prime Minister David Cameron’s government referred the bid to the Competition Commission watchdog, which will now report in six months’ time.

News Corp had agreed in March to hive off Sky News to address concerns that the deal would hand Murdoch too much power over Britain’s media sector.

Analysts expressed deep concern on Monday that the BSkyB takeover deal would succeed in the current climate, amid fresh reports of phone-hacking at the News of the World.

“The biggest concern remains as to whether the takeover will even happen given current politically toxic environment, with new lurid revelations everyday,” said CMC Markets analyst Michael Hewson.

“The market certainly believes its been kicked into the long grass for now,” he added.

‘The beginning of the end’
The government had previously indicated it would approve News Corp’s bid for the 61% of satellite broadcaster BSkyB that it did not already own, after News Corp had vowed to hive off Sky News earlier this year.

Rupert Murdoch flew into London on Sunday to take charge of a crisis which sparked the closure of the 168-year-old News of the World tabloid, which had been a major part of News Corp’s British division News International.

“News Corporation today announces that it is withdrawing its proposed undertakings,” said a company statement on Monday.

The shock announcement came as British Culture Secretary Jeremy Hunt faced growing public anger and political pressure to refer the takeover in the wake of the hacking scandal.

“Clearly this is Murdoch at his political best, determined to stay one step ahead of the government,” said BGC Partners analyst Howard Wheeldon.

The writing was on the wall “that this is the beginning of the end,” he added, predicting the bid would flounder.

The phone hacking scandal meanwhile spiralled on Monday amid reports that other Murdoch papers were involved.

A national scandal
In a story taking new twists by the hour and involving all levels of the establishment, former prime minister Gordon Brown was preparing to say he had been heavily targeted by the Sunday Times and the Sun, both Murdoch papers, reports said.

The royal family were also allegedly targeted, with police protection officers receiving payments for royal phone numbers from the News of the World.

Should the government decide to wave through the deal, BSkyB still needs to agree on a price.

The broadcaster, which has a portfolio including live English Premier League football and blockbuster films, is holding out for more than the £7.8-billion ($12.5-billion, €8.6-billion) offered by News Corp last year.

BSkyB wants an offer in excess of 800 pence a share, while the stock closed at 850 pence on July 4. The share price has thus dived by as much as 18% in just one week, in turn knocking £2.75-billion off the group’s value.

The News of the World had been dogged by allegations of voicemail hacking for years. A royal reporter and a private investigator were jailed in 2007.

Claims last week that murdered schoolgirl Milly Dowler and the families of dead soldiers were targeted escalated the affair into a national scandal engulfing the government, the press and the police. — AFP

With many readers coming to news sites from social media links, they may not pay attention to the subtle clues that mark a story published by the opinion staff
Read more
Politics

In his run for the post of party leader, John Steenhuisen says he will respect any outcome.
Read more
Opinion

Theresa May's resilience has been remarkable. But it is also finite
Read more
Opinion