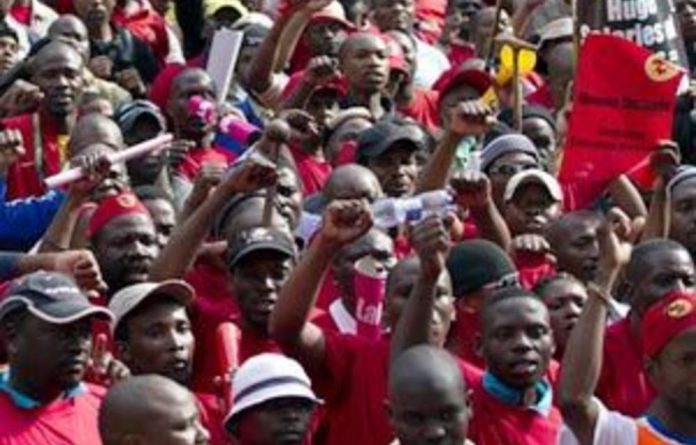 South Africa is facing a major crisis because of the inequalities that are growing every day, Cosatu general secretary Zwelinzima Vavi said in Durban on Tuesday, warning that working class South Africans fighting for a living wage were losing patience with employers.

“South Africa is ranked the number one country in the world in terms of inequalities — it has surpassed Brazil,” Vavi said.

He was addressing thousands of members of the National Union of Metalworkers in South Africa (Numsa) who marched from King Dinuzulu street to the Durban city hall demanding an increase in wages on Tuesday.

“Africans are living in poverty with 58% earning a salary of R325 a month,” Vavi said.

Statistical nightmare
“We are not enjoying the fruits of our democracy because we remain affiliated with a crisis of unemployment, with 36% of people unable to find job opportunities to work.”

“If you look at companies listed on the Johannesburg Stock Exchange directors are earning R59-million per year on average. This is what makes me angry,” said Vavi.

He warned employers that employees would not be patient.

“Workers want money because a living wage is the cornerstone of a better life for all,” he said.

Members of Numsa handed over a memorandum of grievances to the Steel and Engineering Industries Federation of South Africa (Seifsa) on Tuesday.

Out of reach
Thousands of striking workers also marched in Johannesburg on Tuesday.

In the CBD, four unions handed a memorandum of demands to the national bargaining council for the chemical industry. Unions gave employers seven days to respond. Failure to do so would result in another march, said one of the unions, the Chemical Energy Paper Printing Wood and Allied Workers Union, South African Workers union (Ceppwawu).

Basic necessities such as food, housing, transport and healthcare were being placed out of reach of the working class, secretary general Simon Mofokeng told the marchers. He blamed capitalists for engineering divisions and competition between workers over the last decade.

“More and more capitalists are employing workers in the form of labour brokers, temporary workers and shortened contracts,” he said, adding that this was a new form of cheap labour.

Only a few companies dominated the petroleum sector, which allowed a small group to manipulate production and distribution of wealth, Mofokeng said.

National Employers’ Association of SA chairperson Mxolisi Ratsibe, who received the memorandum, told the workers he would talk with the employers and come back with a response as soon as possible.

Minimum wage
About 70 000 workers in the chemical sector started striking last Monday for a minimum monthly salary of R6 000 and a 40-hour work week.

The strike could result in a shortage of medicine and petrol.

“If the employers do not give us a 13% increase the economy of this country will collapse.”

Seatlholo called on the government to ban labour brokers instead of regulating them. He said they made it impossible for workers to enjoy benefits such as medical aid, maternity leave and retirement funds.

Marchers in red T-shirts waved knobkerries, sjamboks and placards, blew vuvuzelas and sang and danced in the street.

Amohelang Motolo, a cleaner at a pharmaceutical company, said she earned R2 200 a month as a temporary worker. She said she could not support her school-going children on this salary. Mduduzi Dubazana, a machine operator at a wooden furniture factory, agreed with Motolo.

“With the assistance of independent mediators the talks have reached a promising stage, which, it is hoped, will bring the industrial action to a swift conclusion,” MEIBC spokesperson Judith Annakie-Eriksen said on Tuesday.

Numsa and Seifsa were consulting their principals and mandating structures on a proposed settlement on Tuesday. They were expected to return to the council on Thursday with feedback from their members.

“The parties remain committed to ongoing constructive dialogue in an effort to bring this industry dispute to a speedy end,” Annakie-Eriksen said.

But Seifsa said talks in the engineering sector had been unsuccessful so far.

“The differences between the two parties at this stage are substantial and it appears unlikely that an early resolution to the strike is possible,” Seifsa’s executive director David Carson said.

He said it was possible there would be further negotiations later in the week.

Numsa deputy general secretary Karl Cloete said the strike would continue until an agreement was signed.

“At the moment there is little movement. They have moved up from 7%.”

Stumbling blocks
He could not elaborate on the details of the negotiations, but said the union would release a statement once it heard back from strikers on Wednesday.

He said the three crucial stumbling blocks were the size of the wage increases, the use of labour brokers, and whether the duration of agreement would be for two or three years.

“These are the three hard issues that we will have to deal with before we get to a settlement.

“The negotiating teams have worked very hard, and although there’s no massive movement towards settlement, there is movement nevertheless. Continuing to talk is going to be in the interest of all parties.”

More than 120 000 engineering workers are demanding 10% to 13% increases. Numsa is leading the strike, and acting on behalf of the Metal and Electrical Workers’ Union and the SA Equity Workers’ Association. — Sapa