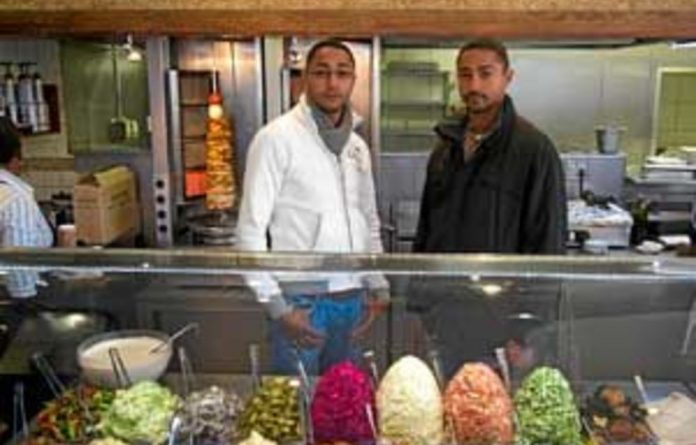 There’s a little table outside the Schwarma Co in Norwood where the regulars sit, just like the one outside Satriale’s Pork Store in Jersey where Tony Soprano and his friends sometimes had coffee.

This doesn’t mean the people sitting on Grant Avenue are involved in organised crime, but they do look like a family.

Identical twins Wafi and Marwan Shiabne arrived in Johannesburg from Israel 13 years ago and set up a “full-on” Middle Eastern shop in Kensington. Residents didn’t take to it — or not enough of them — and the brothers moved to Norwood and a more receptive clientele.

This time, besides the Middle Eastern food, they adjusted the menu to suit South African tastes and started serving burgers, ribs coated in a sticky, dark sauce and great hunks of fillet.

But the salad counter is the real centre of the place. All the meals pass it so when your order is ready you file down and choose from the piles of salad. There are slices of fried brinjal, finely sliced cucumber, tomato and onion, red and white cabbage (served separately), sweetcorn, carrot and parsley, a brinjal dip and a Turkish salad — onion, tomato and parsley sauce with cumin — and “seven kinds of spices” but, despite me asking a few times, that’s as much as Wafi is saying.

The felafal are the best that I’ve tasted in Johannesburg — dhania-laden chickpea mash beneath a crunchy exterior. There is also a breath­taking chilli sauce, which will bring on a snorting fit if you’re not careful.

There is a plate of dolmades on top of the counter and I ask Wafi whether this is a departure from the Middle Eastern menu.

“Do you want to start another war? It’s Greek, Arabic, Turkish. This comes from before there were ­countries and everyone shared the same food.”

This contested cuisine in its 21st-century form represents the migrancy of its people, right down to the New York-style hot pastrami on rye and the breakfast favourite shakshoka — a tomato salsa with two eggs, which is then baked.

Generous hospitality
Everything is made on the premises — the schwarmas, the hummus, the tahini — As Wafi says: “What I can see, I can control.” And it must help having a brother.

“In my restaurant we are generous. When I see the same faces three or four times a week, I know we are offering value-for-money meals, instead of a fancy place, where you can go only once a month.”

Indeed, it seems as though many people have turned it into a place to have their family meals — tables are pushed together, the kids are having burgers, mom and dad are arguing, while the bobba tucks into a steak.

The D-Max isn’t a luxury ride, but it’s not too tough on the purse and can handle the rough road
Read more
Advertisting
Continue to the category
National