Mac Maharaj: Loyal to the cause 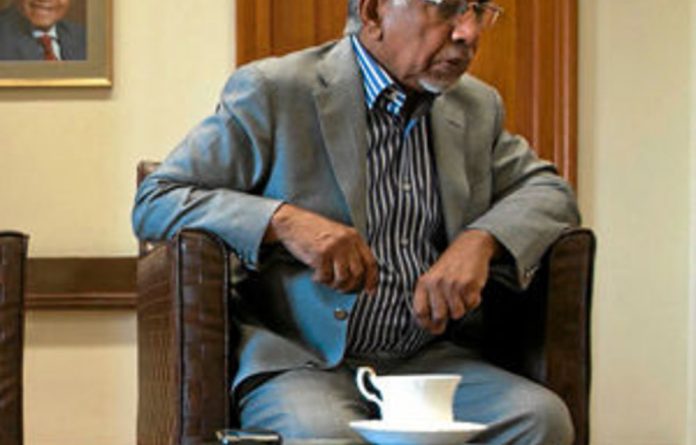 ‘Mac Maharaj is the new prime minister. Mac is a Zuma loyalist brought in to consolidate the Jacob Zuma alliance before the Mangaung conference. Mac is media-savvy. Mac is too old for the position.”

These are some of the views about why Satyandranath “Mac” Maharaj was unexpectedly brought in as President Jacob Zuma’s spokesperson last week.

Interviewed this week, Maharaj said the media should ask itself some hard questions about why it was surprised by the appointment.

“How many times has JZ surprised you? This points to a disjuncture between your analysis and his thinking. It should tell us that you are not quite connecting the dots,” he said.

The characterisation of Maharaj as a loyalist does not sit too comfortably with him. He points out that his relationship with Zuma is a little more complex, forged during the days of exile and the fight against apartheid.

“I hope there is a relationship of trust between us, trust that I will do my best to portray his position with integrity. Even if I have had to speak on a position without having connected with him first, that he would say: ‘Mac did his best to understand me.’ This is a slightly different meaning of trust from the one that goes with the definition of a loyalist.”

Maharaj said the men’s paths had often converged in exile.

Particularly memorable for him was the fact that when former ANC president Oliver Tambo wanted someone to lead an Umkhonto weSizwe mission to South Africa just before liberation, the three names at the top of his list were Maharaj, Zuma and the late South African Communist Party general secretary, Chris Hani.

Tambo eventually settled on Maharaj as the commander of what came to be known as Operation Vula.

“It is through the movement that we became close. It is not so much a personal chemistry, but a shared world view and a commitment to the struggle.”

‘Terrain of speculation’
Maharaj (76) said that Zuma’s apparent surrounding of himself with those he trusts to advance his political ambitions as he heads for the ANC’s Mangaung conference next year, where he could face opposition, was “a legitimate terrain of speculation”. But he insisted this view of the president was incorrect.

“What creates a common commitment between us goes beyond the question of whether JZ will go into a second term,” he said.

“It is a commitment to the transformation of the country to make freedom a reality for many South Africans.

“For me, an ANC conference is about shaping the movement for the future. That is what creates the common bond between us.”

Maharaj said he came in as spokesperson because he had no choice when Zuma asked him to do so.

“In my life I have never been given a choice. I don’t think I’ve ever been ready for anything. This is a job no amount of academic training can prepare you for.

“We are a country still in transition. As president, Zuma has to be aware of what he is doing and explain it with due sensitivity.”

Maharaj said he had identified a gap between the media and government, particularly Zuma, which he wanted to narrow. To this end, he is preparing to host a dinner with editors and senior political editorial executives to “have a conversation”.

He sees his role not as responding to day-to-day media inquiries, but rather as giving background to enhance understanding of Zuma’s messages and thinking.

Maharaj has acted as Zuma’s international envoy since November 2009, working on the Zimbabwean and Libyan crises, among others.

Before that he was a lecturer at Bennington College in Vermont in the United States from 2005 to 2008, when he came back to Durban for family reasons.

He wrote a column for the Sunday Times to supplement his family’s income, while his wife, Zarina, became a self-taught film producer, her most famous work being the TV series Flat 13.

After the 2009 elections Zuma approached him to assist with international work, a position he took up in November that year and which he will continue to discharge alongside his responsibilities as spokesperson.

Maharaj, the Shaiks and Zuma
Maharaj was in the public eye some years previously when he and current South African secret service boss Moe Shaik went public with allegations that former prosecutions chief Bulelani Ngcuka was investigated in exile as a possible apartheid spy.

The Scorpions, an organ that fell under Ngcuka, had earlier confirmed that Maharaj was being investigated for receiving payment from Zuma’s “financial adviser”, Schabir Shaik, while he was transport minister, an investigation that was never finalised.

Maharaj’s confirmation that Ngcuka had been investigated was widely seen as an expression of pique over the Scorpions’ probe and a defence of Zuma, who was also under the elite unit’s microscope.

Maharaj and Shaik were subjected to live camera scrutiny during the Hefer Commission, which investigated their claims and questioned their credibility.

Although the commission dismissed their claims about Ngcuka, Maharaj still believes its terms of reference were predetermined by then-president Thabo Mbeki to reach a foregone conclusion.

He feels vindicated by Hefer’s finding that there was probably validity to his claim that the National Prosecuting Authority was being abused for political purposes.

“Hefer himself said that critical information was denied to him by the state and that if it had [provided it], he might have come to different conclusions.”

They were tough times for Maharaj and Zuma, whom Maharaj believes survived by staying in touch with the grass roots. He reminded the media establishment that “while it plays an important role it must not think it is the sole interlocutor with the ground”.

“JZ survives because he is in contact with the ground. With Madiba it was different because he was loved by everyone. So, while the media are supposed to be the filter through which people express opinions and we have to listen to you, you must not be the sole mirror for our society.”

If anyone were to write his epitaph, said Maharaj, it would be based on the words of American poet Robert Frost, whose grave Maharaj had visited in Vermont: “I had a lover’s quarrel with the world.”

His, he says, should read: “I had a lover’s quarrel with the ANC.”