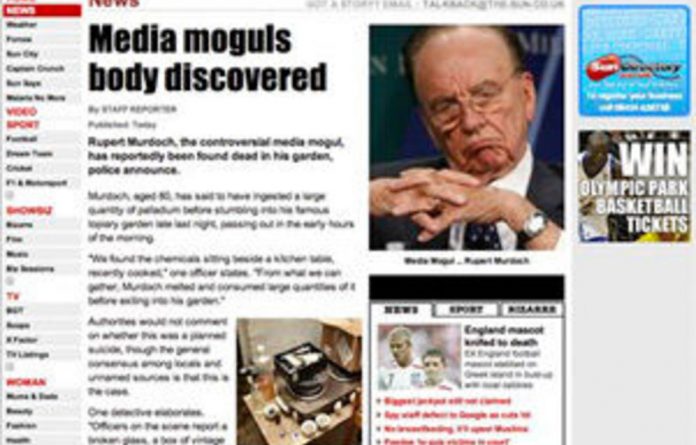 News Corp chief executive Rupert Murdoch and his son James face questions from Parliament on Tuesday in a phone-hacking scandal that has rocked Britain’s establishment right up to Prime Minister David Cameron.

With a second British police chief quitting on Monday over the scandal, Cameron cut short a trade trip to South Africa and Nigeria and was due to return late on Tuesday to attend an emergency debate the following day in Parliament, which is delaying its summer recess. Before returning to Britain the prime minister will give a press conference at 1200 GMT in Lagos.

The Murdochs’ appearance before Parliament’s media select committee was expected to attract a television audience of millions keen to follow the latest twist in a saga that has shaken Britons’ faith in their police, press and political leaders.

“It seems as if there will be standing-room only, that’s not surprising as it’s the first time Rupert Murdoch has been before a select committee in his 40 years of building up a media empire,” said Paul Farrelly, an opposition Labour committee member.

Murdoch’s News International British arm had long maintained that the practice of intercepting cellphone voicemails to get stories was the work of a sole “rogue reporter” on the News of the World newspaper.

The floodgates opened two weeks ago when a lawyer for the family of a murdered teenage schoolgirl claimed the paper had hacked her phone when she was missing, deleting messages and raising false hopes she could be still alive.

Cameron has faced questions over his judgment in appointing former News of the World editor Andy Coulson as his communications chief, while London police chief Paul Stephenson and anti-terrorism head John Yates stepped down within 24 hours of each other over their links to a former deputy editor of the newspaper.

‘No circus’
The parliamentary committee has been pursuing the phone-hacking allegations for more than four years, saying in a report in 2010 that it was inconceivable that managers did not know about the practice.

“We intend to be calm and forensic. There will be no circus, no playing to the gallery because we really need to get to the bottom of everything that has gone on,” said Farrelly, a former journalist who once worked for Reuters.

“We want to know who knew what, and when, and how wide the whole ambit of illegal activity, of which phone-hacking was only one part, went, and how far any cover up went.”

In another twist to a story was news of the death of an ex-News of the World journalist Sean Hoare. It was Hoare who told the New York Times that phone hacking at the tabloid was far more extensive than the paper had acknowledged at the time.

A former show business reporter also told the BBC he was asked by Coulson, who went on to work for the prime minister, to tap phones. Police said the death of Hoare was being treated as “unexplained, but not as suspicious”.

News International chairperson James Murdoch said earlier this month that the News of the World “made statements to Parliament without being in full possession of the facts” and he is certain to be questioned on that statement.

The Murdochs are due to appear at 1.30pm GMT, followed an hour later by a separate hearing for Brooks.

Brooks, a former News of the World editor, resigned as News International chief executive on Friday and was arrested by police on Sunday on suspicion of corruption and intercepting communications before being released on bail.

Former Murdoch editor Bruce Guthrie, who worked for the company in Melbourne, said Murdoch faced a fundamental decision on the fate of the company he has built up into a global media giant from an Australian newspaper business.

“If he really is bent on saying I want this company remaining in the control of my family, which would be James, I reckon he has to take a bullet for James.”

A News Corp board member told Reuters the group’s independent directors were fully behind Rupert Murdoch. There has been talk in recent days that Chase Carey would be elevated from chief operating officer to take over from Murdoch (80) as CEO, with the latter staying as chairperson.

On Monday Standard & Poor’s Rating Services had put all ratings on News Corp on CreditWatch with negative implications given the business and reputational risks associated with widening legal probes in Britain and pressure for a FBI investigation in the US.

Questions for Cameron
Prime Minister Cameron, who took office in May 2010, is facing the worst crisis of his premiership as his decision to hire Coulson as his communications chief comes back to haunt him.

Coulson quit as News of the World editor in 2007 when the paper’s royal reporter was jailed for phone hacking. Coulson said he knew nothing of the practice but took responsibility.

Coulson quit as Cameron’s spokesperson in January when the long-running scandal came back to life. He was arrested earlier this month and is also free on bail.

Cameron’s position has been made worse by a parting shot from London police chief Stephenson, brought low by the force’s decision to hire a former News of the World deputy editor now implicated in the scandal as a media adviser.

Stephenson drew a subtle contrast between his decision to step down and Cameron’s conduct.

Few expect the prime minister to quit but he appears weakened as head of a deficit-cutting coalition and might find his room for manoeuvre limited.

Stephenson and John Yates, the other senior officer to resign, are both due before Parliament’s home affairs committee on Tuesday lunchtime in what will be a prelude to the main event with the Murdochs.

Computer hackers turned the tables on the media group when some broke into the website of Rupert Murdoch’s best-selling British tabloid. They altered the front page to show a fake report about the media mogul’s death. – Reuters