The blanks in the bang bang 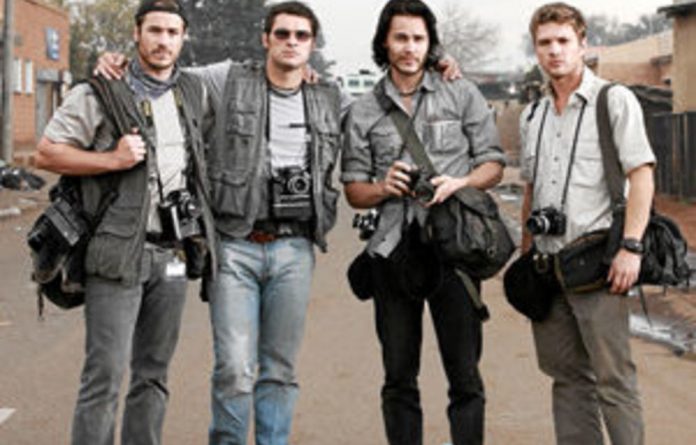 Steven Silver, who directed The Bang Bang Club, seems somewhat taken aback by all the noise his first feature film has made. Speaking from Toronto where he lives, Silver said he was surprised by the “polarised responses” to the film, which opens in South Africa next month.

Although audiences have mostly given it the thumbs up, critics have been more miserly with their praise.

Based on the book by Greg Marinovich and João Silva, The Bang Bang Club follows four adrenalin-infused photographers as they document the violence on the Reef between Inkatha-supporting hostel dwellers and ANC comrades in the run-up to the 1994 elections. The four include Silva, Marinovich, the Mail & Guardian‘s Kevin Carter, who committed suicide in July 1994, and The Star‘s Ken Oosterbroek, who was killed by peacekeeping forces just days before the elections.

The Bang Bang Club premiered in New York (to red-carpet treatment at the Tribeca Film Festival) the week that two high-profile photojournalists, Tim Hetherington and Chris Hondros, were killed in Libya. This cast an even greater spotlight on the movie and, fairly or unfairly, placed it under a more powerful microscope than might otherwise have been the case.

Silver says many people had preconceived ideas about what the movie should or should not have been: “The story of the Bang Bang Club has been around for a long time,” he says. “It’s about journalists and journalists are writing about the film.”

Grainy, vivid recreation
As someone who covered the township violence for the M&G during this time, who often went out in the field with Carter and knew him well, I am a journalist who belongs in this category. And I had my share of problems with the movie, as did many other critics.

But first, the accolades. The cinematography is brilliant, with the authenticity of the crowd scenes and the violent confrontations between the warring parties, breathtaking. The grainy, vivid recreation of the mayhem on Khumalo Street in Thokoza during that time transported me right back there, into a trembling wreck. I was hugely moved too by Taylor Kitsch’s portrayal of Carter as the exuberant, sensitive and tortured soul that
he was.

But I found myself caring less about the others, particularly the lead, a handsome but blank-looking Ryan Philippe who plays Marinovich. He brings little nuance to his character and fails to evoke empathy for his various plights. I found the photographers to be flat, dialogue-challenged characters, lurching in macho style from one dangerous “bang-bang event” to the next without enough script, context or plot to help them along or make us care about them.

Risking their lives to get the shots
“Some critics expressed discomfort about whether the film should have been made at all,” says Silver, “given that it’s a story about white journalists whose troubles pale in comparison to the violence and oppression faced by the people they are covering. That’s not a criticism I think is valid. The experience of these four white men is an interesting one to explore and to make a film about.”

I agree with Silver here, but it’s not hard to see why critics responded in this way. Because the context to the violence is thin, it’s hard to appreciate the importance of what these photographers were doing and why they were risking their lives to get the shots.

The internecine violence that swept the Vaal during that time, aided by the police, was complicated and difficult to understand, even by South Africans living in it. How much more confusing then for international audiences (for whom this movie is clearly intended) whose knowledge of South Africa seldom extends beyond a one-dimensional reading of the anti-apartheid struggle? The story of this time has not been fully told and to see it staged in all its complexity as a mere backdrop makes for frustrating ­viewing.

Silver says it was not his intention to make a movie about the political violence or the Third Force he only hints at that stoked the conflict at the time. (In fairness, he does an admirable job of portraying the violence in a neutral way, without taking sides.) He believes this criticism arises out of the audience’s discomfort at “being put into the space occupied by the journalists themselves as they ply their trade, portraying these images, the difficulties they face, when they feel like vultures”.

“[The photographers] are in essence trading in other people’s misery. I wanted the audience to feel that,” says Silver. Too much context, he says, would have detracted from this. He scrapped an ending in which Marinovich and Silva join the election queues to celebrate the democratic elections and hopefully an end to the violence.

“That ending felt trite. I felt like I was trading in that context.”

I disagree. I think that deeper context would have allowed the audience to feel even more acutely the photographers’ dilemmas of when and whether to pick up or put down the camera.

Unexplored motivations
Silver acknowledges that in trying to put the audience into the photographers’ shoes, the movie was to some extent “hoist by its own petard”. The end result is that instead of feeling close to the dilemmas of the voyeuristic documenter, one feels removed and vaguely confused by the group’s members’ compelling desire to risk their lives photographing people who are brutally attacking one another for reasons that remain unclear.

The Bang Bang Club sits uncomfortably between a documentary and a feature film without being fully one or the other. Silver, with some excellent documentaries behind him is clearly more comfortable with the truth-telling parts of this movie. The actual photographs taken by the group are artfully restaged. Silver also sticks faithfully to minute details of Marinovich and Silva’s book, down to the anecdotes of a dope-smoking Carter not caring that his joint
is mixed with cat hairs off Silva’s kitchen floor.

Part of the problem is it lacks a traditional narrative structure. For some critics the film “runs out of story”, says Silver. “But the film is more experiential than cathartic,” he says. “It’s not a story with a good guy, a bad guy, a beginning, a middle and an end.”

Another downside in making a movie about journalists (besides the criticism it’s likely to elicit), Silver says, is that they are “not particularly good subjects”.

“It’s deceiving. Journalists present themselves as great subjects: they’re in the middle of events and, in this case, hot events. But the reality is that they are spectators. They don’t have stakes. Drama is about stakes and having those stakes threatened.”

For the Bang Bang Club, the stakes are more nuanced: Will I survive, will I get famous, what price will I pay? Silver says that he was “hellbent” on not answering those questions.

Lack of depth
Fair enough. But in my view, the movie spreads itself too thinly to even pose these questions in a meaningful way, let alone answer them. The only personal struggle that feels vaguely authentic to me is Carter’s.

The lack of depth of the characters is not helped by the one-dimensional role played by the women in the movie. Save for Robin Comley, picture editor of The Star, most hang in the background, draped around their okes’ necks during party time. Carter’s real relationship (with a friend of mine who was then a school teacher) is introduced and then inexplicably dropped.

“Maybe there was more to be done with the women in the film. I would concede this is fair criticism,” says Silver. “But it’s very much a boys’ coming-of-age film about that particular time in young men’s lives. For these guys the rules were violent and dangerous and that’s really the core of the story. The women were just not a centrepiece of the story that I was ­exploring here.”

What bothered me most about The Bang Bang Club was the distorted depiction of Abdul Shariff, who was caught in the crossfire and shot dead in Katlehong in January 1994. He is portrayed in the movie as a gawky young novice who eagerly asks to join the Bang Bang Club.

After the group reluctantly allows him to tag along, he is killed in a gunfight in a graveyard in Soweto. In reality Shariff was an experienced and respected photographer who would never have asked to join the Bang Bang Club! It was irresponsible to portray him in this way.

“In retrospect maybe it was a mistake, but it was unintended,” he says. For all those people who knew Shariff, this was certainly no small mistake.

But Silver has a lot to be proud of. His debut into the megabucks world of feature films has got people talking. And it has raised topical questions about the role of photojournalists in an era when their deaths have become horrifyingly commonplace.